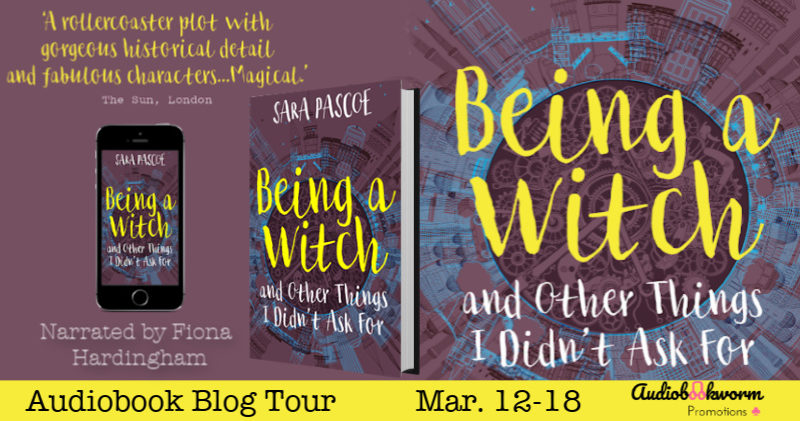 After a life of hurt and disappointment, Raya, the spiky-haired, Doc Marten-wearing 14-year-old decides it’s time to strike out on her own. She leaves the boring English village and what she’s determined will be her last foster placement for the excitement of London. But it turns out she’s a witch, with the annoying habit of time-traveling – by accident. And a sarcastic witch’s cat Oscar tags along for the ride. Why would she fling herself into the midst of the Essex Witch Trials in 1645 England?

After being arrested by one of history’s most notorious witch hunters, her social worker and witch mentor Bryony goes back to try to save them from the gallows. But returning to present day London remains out of reach when they find themselves in Istanbul in the year 1645. There, life is more amazing than she ever dreamed.

Sara Pascoe comes to writing after a career in psychology, where she had many wonderful experiences, from the chimp house to the halls of Congress, with neuroscience research in between. Originally from the United States, she moved to Great Britain in 2004. She lives in Bournemouth, on the southern coast of England where they run a B&B for English language students.

Fiona Hardingham is an award-winning audiobook narrator who has voiced over 175 audiobooks specializing in YA, Children & Contemporary Fiction titles. She is the recipient of several AudioFile magazine Earphones Awards and this year was nominated for an Audie in the ‘Middle Grade’ category. She is a professionally trained actress and recently played a role in the eagerly anticipated ‘Pokemon Detective Pikachu’ as well as a role in ‘Godzilla: King of the Monsters’ both out this coming spring.

The Story:
Being a Witch follows Raya a 14 year old girl who has had a life time of disappointments and life in foster care. Her mother is schizophrenic and when Raya starts seeing things she figures she has schizophrenia like her mother and doesn’t know what to do, but she soon discovers that she is actually a witch – which explains why she can hear the cat talking! She runs away from her current foster home and meets as homeless man who can hear her thoughts. From this point this is where she discovers she is a witch and meets other like her, but this is also where it takes a strange turn! Raya somehow manages to time travel with Oscar the Cat and Bryony (her social worker who is also a witch) to old London and then again to Istanbul in the same time frame.

I have to admit I got confused at first – as we were plodding along in the present and them bam we are back in time. with Raya thinking it was all a dream. I did love the element of time travel and Pascoe really got the the timeline down though there some elements of modern day speak involved that wouldn’t have been around then, but apart from that it was spot on.

The pace of the story was a little all over the place – it would go slow then pick up only to slow again.

The Narrator:
Fiona Hardingham did a wonderful job at bringing this story to life. She flowed with ease between characters and accents nailing them all. We had New York for the cat and then all the way to Turkey! The audio was flawless and flowed evenly with no background noise etc.

I received this audiobook as part of my participation in a blog tour with Audiobookworm Promotions. The tour is being sponsored by Sara Pascoe. The gifting of this audiobook did not affect my opinion of it.

#Review SUMMER IN SCOTLAND: MARY QUEEN OF THE SCOTS by Laurel A. Rockefeller