BEAUTY OF THE DARK: THE COMPLETE TRILOGY by Amanda Leigh 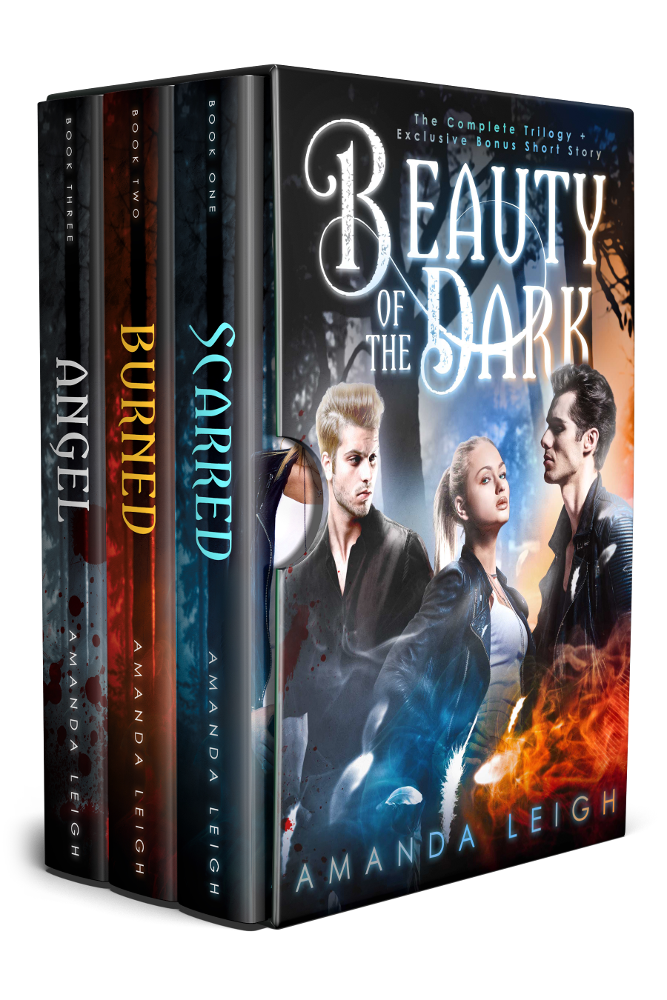 Beauty of the Dark: The Complete Trilogy
by Amanda Leigh
Genre: Mature YA Paranormal Romance

Delicious. Tantalizing. Mysterious.”
For the first time, the Beauty of the Dark trilogy is bundled together,
including an exclusive short story. Experience the intrigue, magic,
romance, and heartbreak with Kiara, Trent, and Kaleib.
From a sinister demon to unthinkable betrayal to forbidden feelings…can
they overcome their differences? Will Trent and Kiara give in to
their connection? Find out who prevails in this epic battle.
SCARRED – Book 1

A sassy witch, a vampire sworn to protect her, and a vampire that’s
falling for her…? All bets are off.

Kiara was born with power. At eighteen, her powers are peaked, and she’s
destined to destroy the demon threatening her home town. But even
with her power and the help of Kaleib, a vampire who’s like an
older brother to her, they’re not strong enough to stand against the
evil. Enter Trent, a vampire with a secret past, and the tables turn,
giving them a fighting chance.
Kiara shouldn’t feel anything toward Trent, especially since Kaleib hates
him, but a strong attraction builds between them during their
mission. Trent has successfully avoided caring about anyone for over
one hundred years, and he plans to keep it that way. When Kiara asks
for help, he can’t seem to deny her. Never would he imagine that
he’d run into Kaleib, someone from his past–a vampire who knows
his secret. Trent convinces himself he’s aiding Kiara for his own
selfish amusement, but the little witch seems immune to his charms
and she’s chipping away at his walls. To his dismay, he finds himself
beginning to care for Kiara.
Between the demon that wants to kill her and two fighting vampires, how will
things play out for Kiara and Trent? Will this demon let them live to
find out?
BURNED – Book 2

Just when it seems things can’t get worse…they do.

When Kiara wakes up as a vampire, she knows things will never be the same.
Her best friend is dead and the demon that killed her is still out
there somewhere. They’re back to square one and Kiara’s newfound
thirst hovers over everything they do. The hostility between Trent
and Kaleib still brews just below the surface. Will Kiara hold it
together or will she lose control? Will her new thirst be too much?
Kiara blames Trent for Sarah’s death and hates herself every time she
feels something for him. Their budding trust is tested. Despite
everything, he tries to be there for her. By her bedside when she
wakes, helping her figure out how to tell her godparents what she is
now, even staying in her house when she can’t sleep.
When Kiara’s dreams are plagued with visions of Sarah threatening her,
Kaleib and Trent say that it’s coincidence. Her mind dealing with the
loss. But as the visions come while she’s awake, it looks less like
coincidence and more like something sinister.
Is it her anger over Sarah’s untimely death or is it something more?
Something dangerous?
ANGEL – Book 3

With a battle close at hand, Kiara must face the darkness inside her.

The only way for Kiara to save her loved ones from a sinister demon is to
turn herself over. But doing so would ensure the destruction of not
just those she loves, but the whole world. When she refuses, someone
close is taken from her in warning, sending her into hiding with
Trent and Kaleib. While a battle looms, Trent and Kaleib must put
aside their hostilities toward each other to protect Kiara. They help
her navigate the impending fight, not to mention the hunger fighting
within her.
As the final fight draws near, Kiara and Trent grow closer, the limited
space ramping up tension and making their passion hard to deny. Will
their feelings strengthen them or be their undoing?
When the time comes, will Kiara yield to the darkness within her to
destroy the monster haunting her?
Goodreads * Amazon 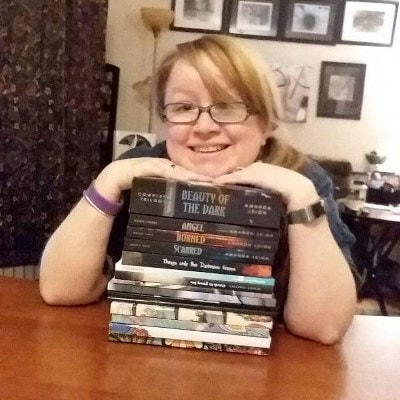 Amanda Leigh has had a love of words since before she could write them
herself. Once she learned to read and write herself she just couldn’t
stop. She reads any genre as long as the book sounds interesting.
Which may explain why she can’t and never will be able to stick to
one genre in her writing. From Contemporary Romance to Women’s
Fiction to Paranormal Romance to Poetry and more to come. When she’s
not writing or reading she enjoys getting swept away in a great TV
show, going to the theater, listening to music, cooking and many
different forms of art. She has a cat she adores and also loves
Psychology, tea, coffee, chocolate and Elvis Presley. Not necessarily
in that order. Feel free to get in touch with her.
Website * Newsletter * Facebook * FB Group * Twitter
Instagram * Bookbub * Amazon * Goodreads 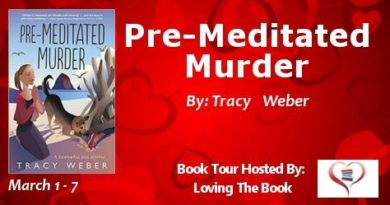