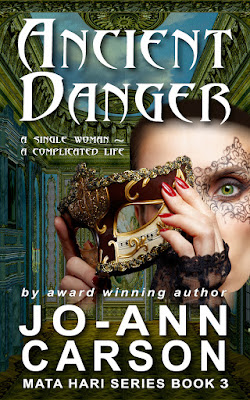 A single woman — A complicated life

International, super-model Sadie Stewart meets her Dutch lover, Sebastian Wilde, in Venice to celebrate their six month anniversary. But having lived a double life as a CIA operative for ten years, her life is never simple.

During a costume ball in an ancient Venetian palace, an assassin tries to kill her. As a result Sebastian gets ridiculously, over-protective, which drives her crazy. Her old boss offers to help her, but wants something in return.

Bakari al-Sharif, an arms-dealer with an insatiable thirst for power, is planning to steal King Tutankhamen’s scarab from Highclere castle near London. Sadie is the only person who has ever gotten close to al-Sharif and lived. The CIA wants her to stop him.

Or at least that’s what they say. When it comes to the world of espionage, the true motivation of the players is never clear.

Can Sadie return to the life of a spook and maintain a relationship with Sebastian? Can she nail the arms-dealer? And why did the masked man try to kill her?

Life is complicated for Sadie Stewart.

A cross between Indiana Jones and Covert Affairs

From the desk of Jo-Ann Carson…

I Love a Good Villain

There’s nothing like a good, bad guy to make a story really zing. I work hard to give my villains dimension. I want to know why they’re so bad and I like to reveal their true nature in snippets to add suspense to the story.

When a villain is understandable he is scarier. If I do a good enough job of portraying my bad guy as a real, but flawed, human being, my reader will develop some empathy for him. That is until the final scenes, when his darkness takes over.

I don’t think anyone is all-good or all-bad and the mixtures intrigue me. I like to think of my villains as finely prepared cocktails with just the right combination of liquors and a heavy dose of danger.

Sadie is a model by day and a spy by night. Today she’s talking about modeling.

The top five things about my modelling career? I get to:

But being a model isn’t easy. My Top 5 Pet Peeves are:

…kill my feet. I know, they look sexy, and give me a special kind of control over men, but I’ll be honest standing for hours in them while I pout gives me blisters and an aching back. Having to run in them is pure hell. I’d like to see James Bond try an escape in a four inch heel.

Okay folks. Let’s get this straight. Having a symmetrical face does not mean I’ve had a lobotomy. Sheesh. Some people think my IQ is in the range of my shoe size. Of course that does come in handy…

In the modelling business I’m never young enough, skinny enough, stylish enough…  You get the idea. I hear the whispers and feel, I’m not enough. Many models self-medicate to deal with the negative side of the beauty industry. I say to hell with that, and carry a gun.

One day you’re in the top five, the next morning you wake up and no one knows your name. Modelling is a highly competitive, short-term gig. You need to have a strong sense of self to survive. And a good lover helps.

5. It takes me away from Sebastian

He is the love of my life and I don’t like to be away from him.

Introduction to the heroine:

Stifling the desire to scream, Sadie stood on top of the fourteenth-century Venetian palazzo looking out over the lagoon and its islands. No point risking the lives of others. She took a deep breath of the salty air blowing in off the Adriatic Sea. The red-tiled rooftops, round domes and cathedral spires of the ancient city spread to the west. For hundreds of years noblemen had used this perch to watch the arrival of merchant ships from the Orient with their exotic wares. Now it had become her trap.

Below, an opera singer in the bow of a gondola serenaded young lovers nestled inside, while the gondolier at the stern in his blue and white striped shirt navigated the still night waters. Venice, a city steeped in history and secrets, a place where anything could happen in a heartbeat and did; a sanctuary for people like her who wanted to disappear…

Introduction  to the two bad guys:Bakari assessed people with speed and precision. In his business an accurate understanding of people was a matter of life and death. Khalid had a Frankenstein look about him, like a man not fully grown into himself, a man who could be dangerous, a shell waiting for its heart. Daring, possibly unstable, but surely not as dangerous as Djeserit had claimed.

Suspicion played across the light in the young man’s eyes and he leaned his lanky body back in his chair. “My name is Khalid Badru. Do I know you?”

The words hit Bakari like a thousand grenades, unleashing a toxic mixture of regret and anger within. “Not yet.”

Maybe he should have just had him killed, as his brother had suggested. No. That wouldn’t be right. If anyone killed this man, it would have to be him. But the man was barely more than a boy. A boy with his blood. Bakari wanted to give him a chance.

Jo-Ann Carson has lived most of her life on islands off the west coast of Canada, surrounded by snow covered mountains, lush rain forests and pristine beaches.

Growing up, she dreamed of traveling the world like James Bond, finding archeological treasures like Indiana Jones, and finding true love. In her Mata Hari Series she combines elements of adventure, danger and steamy romance.

[Tour] From the Halls of Cuba by C E Porch