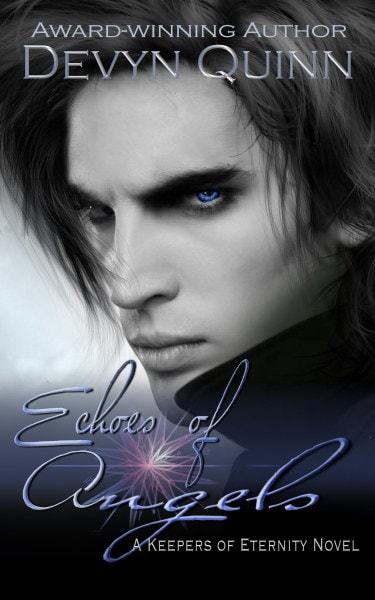 If you like dark paranormal romance, you’ll love the Keepers of
Eternity series by Devyn Quinn!
“This is an exciting, atmospheric story. . . . A dark fantasy with tortured
characters and dramatic events, Echoes of Angels is
a very promising start to a new series. 4½ stars.” —Romantic Times
With her life in shambles and nowhere to turn, Julienne Blackthorne has no
choice but to accept her grandmother’s offer to return to her
ancestral home—a home Julienne’s mother fled in fear more than
twenty years ago. What she finds there is a world so macabre it
haunts her senses and fills her with dread. And the darkly compelling
Morgan Saint-Evanston, whose mysterious pull haunts her in more
sensual ways.
Morgan was once the most feared mercenary in a sinister realm and was
destined to become the leader of his people—a duty he abandoned
when his tormented soul drove him to seek exile in the mortal world.
Tortured by his betrayal and the knowledge that those who dwell on
the dark side will one day have their vengeance, he turns to the
beautiful Julienne for one last moment of solace. Because the veils
separating the worlds are about to open, and Morgan knows he must
take the fight to the enemy before the forces of darkness unleash
their unholy hell on mankind.
As Julienne surrenders to the undeniable passion that flares between
them and Morgan prepares to confront a fate he cannot ignore, both
will be plunged into a realm where human souls are open barter and
even the power of love may not be enough to save them.
**Only .99 Cents!**
Add to Goodreads
Amazon * B&N * Kobo 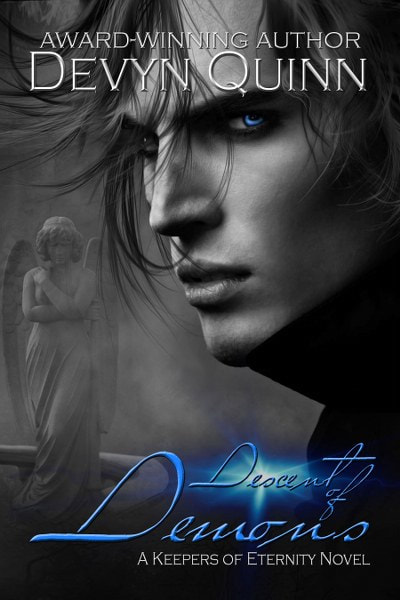 “Devyn Quinn writes compelling characters, a chilling and gripping story,
and a setting that is easily seen within your mind’s eye.”
—Rogues and Romance Reviews
Left for dead in a hellish corner of the dark realm, Julienne Blackthorne
refused to surrender, and through her own force of will and her love
for one man she managed to survive and escape. But survival brings
its own new hell when she makes a horrific discovery. A demonic
sorcerer has begun a search for the forbidden Scrolls of Cachaen,
ancient texts that will restore his waning magic and give him the
power to take his final revenge on the man Julienne loves, Morgan
Saint-Evanston.
In a desperate quest to save Morgan and stop the diabolical sorcerer
from gaining control of the scrolls, Julienne will be forced to
confront the most sinister powers of this dark world. And in a race
against time that will determine the fate of all mankind, Julienne
and Morgan will find themselves in a perilous battle against evil
that will either condemn them to eternal misery . . . or grant them
everlasting love.
**Only .99 Cents!**
Add to Goodreads
Amazon * B&N * Kobo 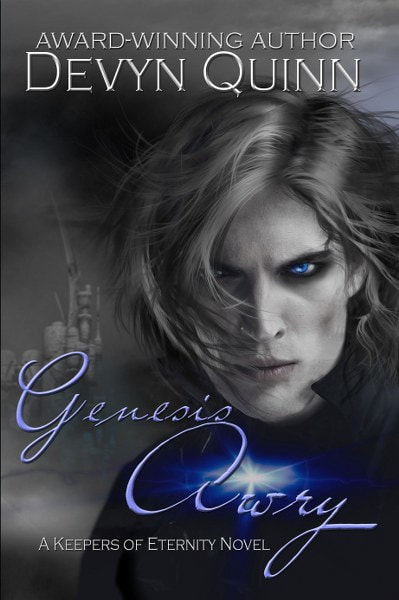 Since Julienne Blackthorne succumbed to the dark passion of the erotic and
erratic Morgan Saint-Evanston, she’s been forced to draw on her
deepest strengths to survive the demonic realm of the otherworld and
the treacherous existence of an immortal. But when Morgan obtains the
Scrolls of Cachaen—said to be the keys controlling the forces of
nature itself—it unleashes a deeply sinister beast from the astral
realm who wields an unholy power capable of defying their efforts to
destroy him.
Morgan knows that safeguarding the scrolls is his only hope for protecting
Julienne and all of mankind, but the powerful and mystical scrolls
are taking a debilitating toll on him, even as very mortal enemies
scheme to control him for their own purposes. As he is stripped of
the strength he needs to wage an epic war against the beast hell-bent
on their destruction, he realizes he will have to turn to a dark
magick for their salvation—one that may consume his soul.
And as Morgan and Julienne struggle to defend themselves and the
hard-fought love that fires them both, they will come face-to-face
with a cruel fate that would turn their one hope for survival into
the very thing that could lead to their ultimate destruction.
**Only .99 Cents!**
Add to Goodreads
Amazon * B&N * Kobo 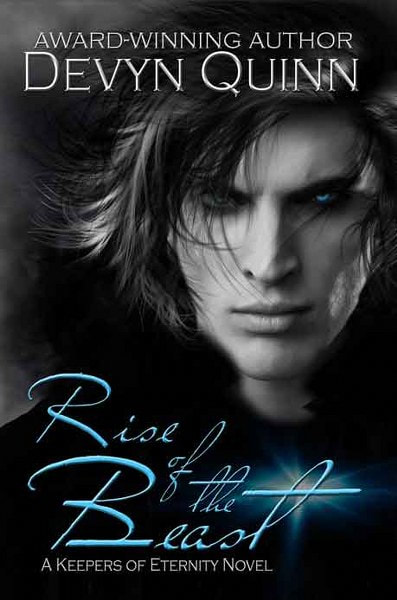 Rise of the Beast
Keepers of Eternity Book 4

Morgan Saint-Evanston has prevailed over every demented beast sprung from
the otherworld, but now he finds himself tormented by an earthside
foe who could destroy everything he’s built in the mortal realm.
Forced to turn to a magickal ally to preserve the sanctity of
Blackthorne Manor and safeguard its secrets, he discovers that the
bewitching creature’s services come at a chilling price: the very
part of his soul that harbors his humanity.
Julienne Blackthorne is bonded to Morgan by blood, but the emotional and
erotic ties that bind them are fraying as his lost humanity sends him
spiraling downward to the furthest extremes of darkness and
depravity. As Julienne struggles to save the man she loves from utter
and eternal ruin, she must delve into her own dark powers at the risk
of forsaking her sanity.
As Morgan and Julienne steel themselves to do battle with his greatest
inner demons and those who would deny him his legacy, they must
confront the very real threat that his fragmented psyche will lead
him to the edge of self-destruction—and the destruction of all they
hold dear, both in this world and in their hearts.
**Only .99 Cents!**
Add to Goodreads
Amazon * B&N * Kobo 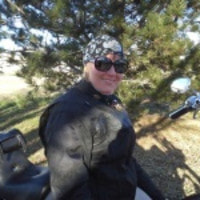 Devyn Quinn lives in the scenic Southwest, though she has called several
other states home. She is a huge fan of dark gothic music &
shoot-’em-up action movies.
Having published through traditional channels, Devyn got fed up with the
antiquated New York system & decided to head into indy publishing
with Beyond the Page. Beginning in 2017, she will be releasing new
work. She is also planning to reissue her former NY titles with fresh
material & smoking hot cover art. More exciting is the
forthcoming “Ocean Deep” mermaid series, which will tell
more tales of the Mer. The Kith & Kynn, Eternity, and Wildcat
series’ will also be continued with new books.
Website * Facebook * Twitter * Instagram * Pinterest * Bookbub * Amazon * Goodreads