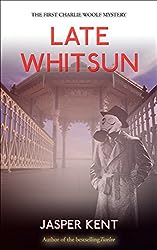 Charlie ‘Big Bad’ Woolf thought it would be easy money, and there’s precious little of that for a private detective in a seaside town. It was just a trip up to London to hand over an envelope – a favour for his old partner, Alan O’Connor. But Woolf couldn’t resist taking a peek inside.

The pictures were unadulterated smut; a man and a girl in a hotel room. Blackmail, pure and simple – right up O’Connor’s street. Woolf was happy to be rid of them, handing them over to a masked man in a London park.

When he gets home, O’Connor’s waiting for him, which is a surprise. The bigger surprise is that he’s dead; a bullet through the eye. Woolf is the prime suspect, but when he discovers that the man in the photographs is a German diplomat and the blackmail is being run by MI5, things get more complicated.

It seems obvious who killed O’Connor, but Woolf soon realizes that he’s the only one who cares. With war looming, the good of the country counts for more than the arrest of a murderer. If he’s to see the killer caught, Charlie Woolf must prove that the crime has little to do with the world of espionage …

There are ways to make a girl look prettier; changes that no one can quite put their finger on, but are what the man – or occasionally the girl herself – is paying for. Some of it’s just tidying up, things she should have done for herself before she stepped outside, like neatening the line of the eyebrow or defining the lip more clearly. Some of it’s more major: a little off the nose – or, once in a while, on. The same for the chin. The easiest thing to improve is the complexion; you’re starting with a blank sheet there. Sometimes it’s just a case of giving her a better hat.

But you can’t go too far. It has to be the same face you started with – recognizable. You don’t want the prospective mother-in-law coming round and asking ‘Who’s that?’ only to be told, with shuffling feet, that it’s her own daughter. And you don’t want to end up with something so beautiful that it eclipses the original, a Galatea for the man to gawp at and wonder what might have been, or for the girl herself to turn away from whenever she sees it, knowing that reality is its poor reflection.

This girl wouldn’t take much work. She was a real looker. She knew it, and he knew it. They were engaged, so the ring on her finger declared, and recently too, judging by the way she rested her hands in her lap to ensure that everyone could see it. They were down from London, as were more than half the people who paraded along the Palace Pier that day, the last Saturday in May. So far, 1938 hadn’t been a great season. Easter had been late this year, and so Whitsun would not be with us until the beginning of June, the following weekend. But then the bank holiday would bring them to Brighton in droves. If the weather was good then even more would come, but today the sun was coy, just visible as a glowing disk through the light cloud, not strong enough to cast much of a shadow. [……]

Jasper Kent was born in Worcestershire in 1968, studied Natural Sciences at Trinity Hall, Cambridge, and now lives in Hove. TWELVE, the opening book of his historical horror series THE DANILOV QUINTET was one of the bestselling debuts of the year.

As well as writing novels, Jasper works as a freelance software consultant. He has also written several plays and musicals.

In addition to other projects, Jasper is planning two more Charlie Woolf novels: THE STALACTITE MAN and TO MUDDY DEATH.

To find out more, visit www.jasperkent.com

#BlogTour THE WATCHERS by Lilith Saintcrow