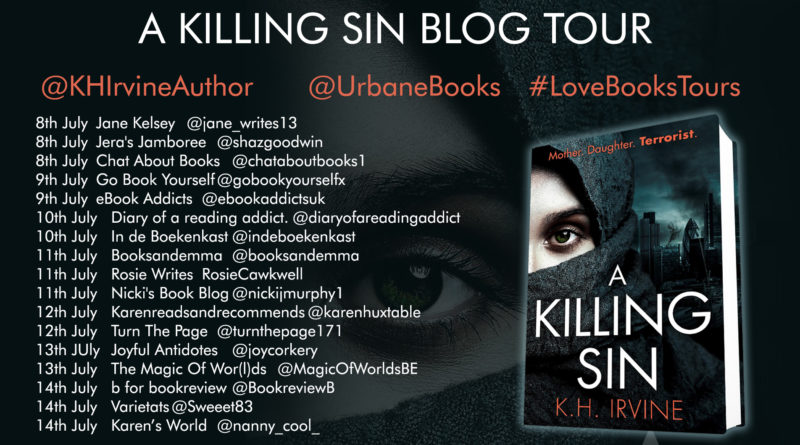 #BlogTour A Killing Sin by K.H.Irvine 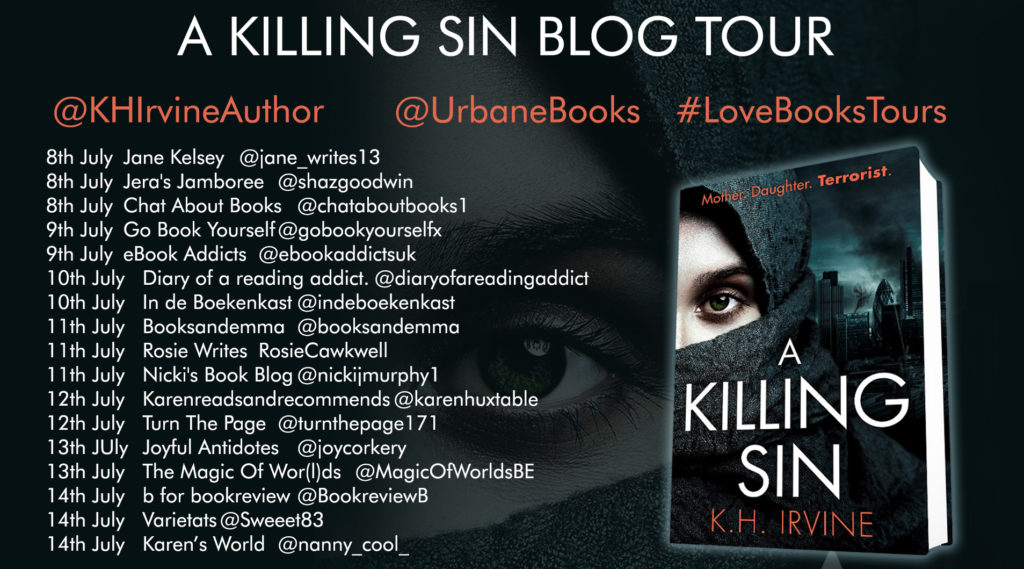 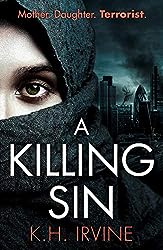 Would you surrender your secrets to save a life?

London. It could be tomorrow. Amala Hackeem, lapsed Muslim tech entrepreneur and controversial comedian, dons a burqa and heads to the women’s group at the Tower Hamlets sharia community. What is she doing there?

Ella Russell, a struggling journalist leaves home in pursuit of the story of her life. Desperate for the truth, she is about to learn the true cost of the war on terror.

Millie Stephenson, a university professor and expert in radicalisation arrives at Downing Street to brief the Prime Minister and home secretary. Nervous and excited she finds herself at the centre of a nation taken hostage. And then it gets personal.

Friends since university, by the end of the day the lives of all three women are changed forever. They will discover if friendship truly can survive secrets and fear.

Saturday 15h May
The Comedy Café ELLA
The Comedy Café open mic is a bear pit. The standard is high and the punters unforgiving. I feel the adrenalin surge in my veins as the MC shouts her name.

‘Amala Hackeem!’ I give Neil’s hand a quick squeeze. Millie and I lock eyes. I can feel her take a breath. Part excitement and part trepidation. Amala loves it. She runs on stage, talking at the same time. Punching out jokes like a volley of Amir Khan jabs. Jab. Jab. Jab.

I hear her opening line. She’s used it before and it still makes me cringe. I can’t help it. I worry for her. ‘I know what you are thinking. You are looking at me and thinking, she can’t be a real Muslim. She’s not dressed like one.’ The crowd shift in their seats. Ready to laugh but not sure yet, feeling the underlying air of anxiety in the room. Less certain of what’s ok. With a flourish that makes my heart pound, she finishes, ‘She doesn’t look like a bottle of Guinness.’
They laugh. They’re on her side. Thank God. In the bar afterwards, she’s buzzing. She doesn’t even see him coming. Neither do I. Not until I see his spit land on her face. He looks like a man possessed. ‘Who do you think you are, you infidel? You think you’re so special. You drag good Muslim women into your gutter.’
His mouth is twisted into a vicious sneer, his yellow teeth bared and his eyes full of hate and contempt. ‘Someone is going to wipe that stupid smile off your face. One day a husband will show you what it is to be a good Muslim wife.’ In that instant I know she won’t resist it. She never can. And she doesn’t.
‘Don’t worry, mate, I don’t fit the bill to be a good Muslim wife.’ She lifts her chin, and with a grin that’s recognised the world over, she delivers the line.
‘I talk.’
I feel it before I see it. The air as he pulls back his arm to maximise the impact. Rage turns his face puce. His fist crashes into her eye before she has time to move from the full force of the blow. Before any of us can move. Stunned, she falls back. Scrambling to stay upright but failing. I rush to grab her as she falls. In my peripheral vision, I see Millie, quick as a whip, grab his hair and smash his face into the bar.

K.H. Irvine grew up in Scotland and now lives near London. The book was her 50th birthday gift to herself, believing you are never too old to try something new. Her work has taken her to board rooms, universities and governments all over the world and has included up close and personal access to special forces. A Killing Sin is her first book. The second follows on a few years later as Britain moves to civil unrest with the rise of the far right as the personal and political become intertwined.

#blogtour BORN OF SHADOWS AND MAGIC