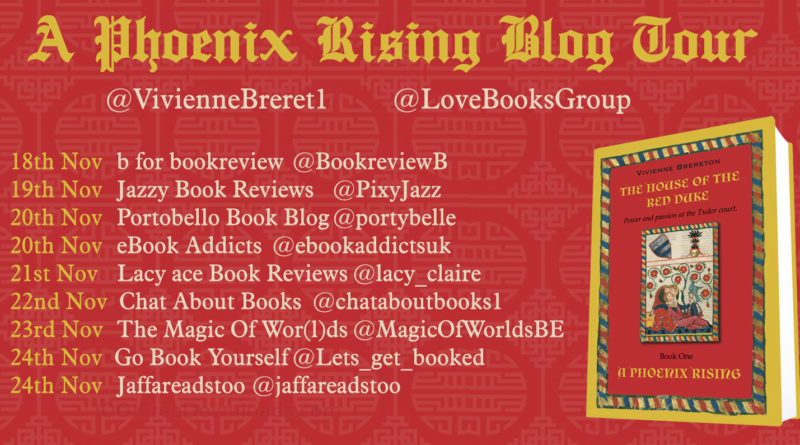 #OnTour with #LoveBooksTours
A Phoenix Rising by Vivienne Brereton 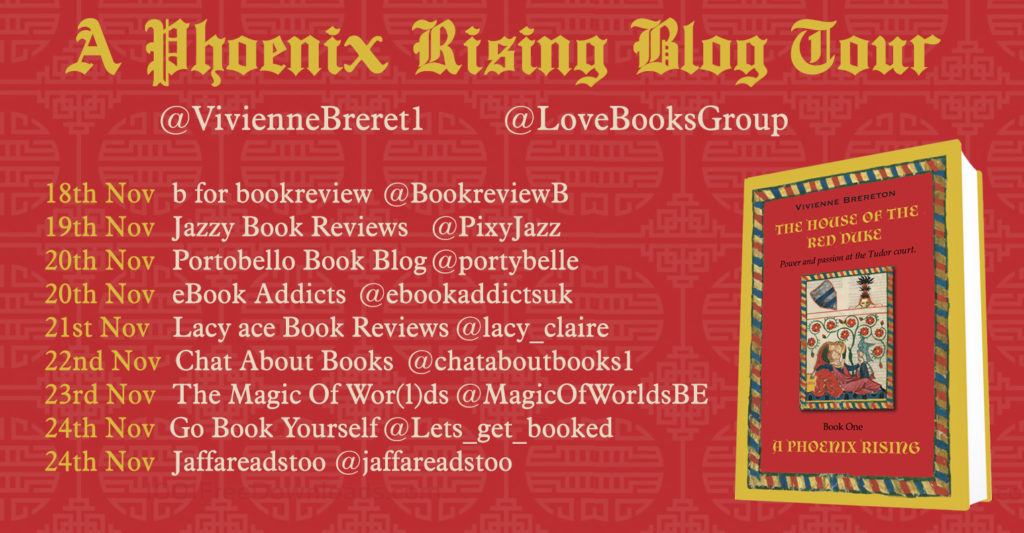 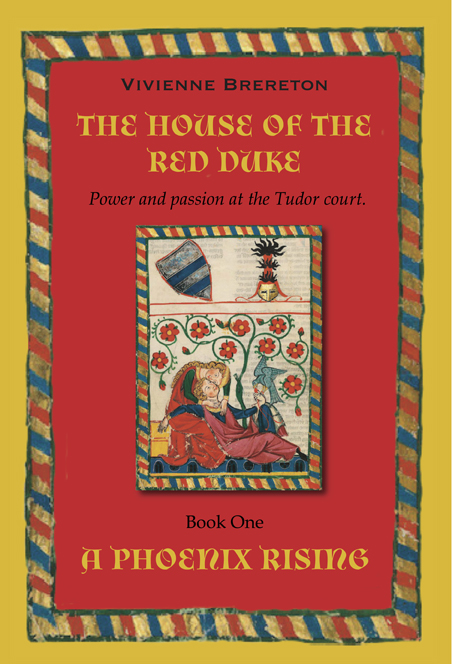 “If I have anything to do with it, we Howards will live forever.” Thomas Howard Charismatic head of one of the most powerful Houses in Tudor England. An indomitable old man approaching eighty: soldier, courtier, politician, a ‘phoenix’ rising from the ashes. After a calamitous period of disgrace, the Howards, renowned for their good looks and charm, are once more riding high at the court of Henry VIII. Set against the backdrop of the extraordinary 1520 ‘Field of Cloth of Gold’, it is a tale of ambition, love, and intrigue, with Thomas at the centre of this intricate tapestryWill Thomas’s bold vow be fulfilled? Danger stalks the corridors of the royal courts of Europe. Uneasy lies the head beneath a crown. Every other ruler – a fickle bedfellow…or sworn enemy. The action takes place in England, Scotland, and France. On either side of the Narrow Sea, four young lives are interwoven, partly unaware of each other, and certainly oblivious to what Dame Fortune has in store for them. “Nicolas de La Barre laid his lute to one side, hardly bothering to stifle a yawn of boredom. Nevertheless, he couldn’t escape the fact he’d agreed to take on a new wife….” Explosive family secrets are concealed behind the ancient walls of castles in three lands. But… “There are no secrets that time does not reveal.”

Nan looked at me expectantly. ‘So what do we do?’

‘We’re going to ask some questions. First, the profession of our husbands.’

‘Pick up a handful of the stones and lay them next to each other in a long row.’

Nan seized some stones and quickly did as I said. ‘And now?’

‘We’re going to count together, using a little rhyme Grandam taught me. When we run out of stones, that will be your husband’s profession. Listen to me and then repeat the rhyme yourself.

‘I’m certainly not tying myself to a rascal who’ll end up on the gallows,’ Nan giggled, as we counted together.

‘Gentleman,’ I said. ‘You’re going to wed a gentleman.’

After we discovered I was to wed a soldier, I explained the next question to her. ‘We do exactly the same thing but this time, we want to know what kind of garments we’ll wear when we’re wed. ‘“Silk, satin, muslin, rags.”’

It was a relief to discover that neither of us would find ourselves in rags, rather Nan would be in silk and I in satin. ‘I think your husband’s going to be richer than mine,’ I teased her. ‘Now, let’s find out how we’ll travel to the church: in “a coach, a carriage, a wheelbarrow or a cart.”’

Again, Nan was to travel in a slightly grander fashion than me. ‘Let’s see if I can finally beat you. We’re going to find out where we’re going to live,’ I said, repeating the options of: ‘“palace, castle, cottage or barn.”’

Of course I didn’t beat her. ‘I don’t mind living in a castle,’ I said. ‘Only kings and queens live in a palace.’

‘Or a lady’s maid. Perhaps, I’m going to wed one of the King’s servants and live in the royal palace with him. What’s next?’

‘Finding out when we’ll wed. But as today is your birthday and you’re only eight like me, I’m going to have to alter the numbers a little: ‘“ten years, twenty, twenty-five, never.”’ We can’t find out the exact number of years but it’ll be the nearest to the one we choose.’

‘So, I will be wed,’ said Nan, pointing to the final cherry stone in dismay, ‘but not for twenty-five years. Forsooth! By the first of June in twenty-five years I’ll be creeping to my grave. Not to a church door. You, on the other hand, will be wed in ten. At least, I’ll be living in a palace.’

As she said these words, one of those strange feelings came over me that I’d had before (Grandam Matilda used to say I had the gift of second sight from the De Laceys, her side of the family); it was as if I was aboard a galleon, rocking to and fro on the high seas, dipping and diving over huge waves, the sails of the vessel billowing like a giant’s handkerchief. I was glad we were seated on the ground otherwise I was certain I would have fallen, unable to keep my balance. Even my vision was shifting as I looked at Nan for I could have sworn I saw a golden crown upon her head. And then, as swiftly as it had come, the sensation vanished and my sight returned to normal.

‘Maybe I’m going to be queen of a foreign land,’ Nan said, putting on a silly voice. ‘Where the king likes old women.’ She bent over, pretending to be a crone and pulling a hideous face.

I was slightly taken aback that Nan (who’d noticed nothing) seemed to have acquired the ability to read my mind.

‘I can’t be Queen of England,’ she went on, ‘because our new King is about to wed the Spanish princess at the Palace of Placentia. They say he bought over three hundred pounds worth of jewels from a Parisian jeweller.’

‘Father told me he bought a thousand pearls and wears a gold collar around his neck to which a diamond as big as a walnut is attached.’

I reached over and dug her in the ribs. ‘Let’s hope your old king is equally fashionable.’”

Born near historic Winchester in the UK, Vivienne Brereton has been passionate about the Tudors for as long as she can remember. This led to a degree in medieval history at university where she met her future husband. Three sons later and six countries she called home, she finally felt ready to write a novel.
Words have always played an important part in Vivienne’s life whether it’s been writing, editing, teaching English to foreigners, or just picking up a good book. In preparation for her novel, she read intensively on the skills needed to write well and did an enormous amount of research which she greatly enjoyed. Having three sons was helpful when she came to write about the characters, Tristan and Nicolas. All those squabbles she had to deal with came in very handy. She also used her husband and sons as guinea pigs for her Tudor cookery attempts with varying degrees of success (abuse).
Seeing ‘A Phoenix Rising’ in print for the first time was a moment of great joy for her and she hopes you enjoy reading it as much as she enjoyed writing it.