Twin brothers- One gay, one straight. Two romances with double the hijinks.
Skye:
I love my twin dearly, I really do. The thing is, I’m not so sure about River’s latest plan. On the surface, it looks solid. Work for the cruise line, save up the cash, and buy a used bus to do up so he can go out on tour.
Only thing is, he failed to tell me that while he was doing his act as Cha Cha Larue for the drag queen variety show, he’d signed me up to do so as well! Rather than lose our jobs and get him into trouble for fraud, I decide to go along with it. After all, River promises I’ll only have to cover for him if he’s ill. He says I’ll get to mostly just lounge around the pool. Somehow, I doubt it’s going to go quite that easy for me.
It never does when it involves Cha Cha, but, really, how bad can it be? It doesn’t take long to find out when someone starts sabotaging the show and targets Cha Cha! We’re going to get to the bottom of it. We’re not going it alone, though. River’s got a security expert admirer on board, and I have my own little shipboard romance going on with a lawyer. Between the four of us, the saboteur doesn’t stand a chance.
Hopefully, the opposite will prove true for our romances as River and me? When we fall, we fall hard. And boy, have we fallen- broken heel, face plant hard.
Cruisin’ in High Heels is a fun romp with a cozy mystery edge and contains both mm and mf romance. It takes place in the Cruisin’ Around series world of which it is an official part.
Goodreads * Books2Read

Loretta Johns is a US Army Brat who grew up to serve in the Army herself before turning her full attention to her children. An avid reader, she began to write her stories and has been over the moon at the discovery others are willing to pay her for them.
Facebook * Bookbub * Amazon * Goodreads

Sarah Johns literally lives with her head in the clouds. Sarah lives in the Pacific Northwest in a high rise scheming and dreaming of plots with her USA Today and Rainbow Award Nominee sister Loretta Johns. Sarah lives out her happily ever after with her real life hero Boss E. Bear, doggie and Leela an old grumpy feline. Before Sarah began her writing adventure she earned her Master’s in Clinical Psychology and working in the addictions field. Sarah has also earned her wages by driving Semi Trucks contracted with the Department of Defense and also a Veteran’s Service Officer. Sarah is now a full time author and partner of Pahoa Paradise Publishing with her co author Loretta.
Bookbub * Amazon * Goodreads 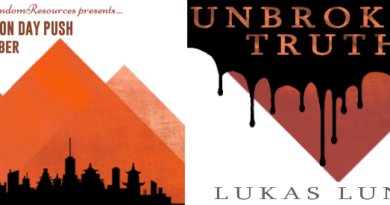 WHOM SHALL I KISS…AN EARL, A MARQUESS, OR A DUKE? by Laura A. Barnes