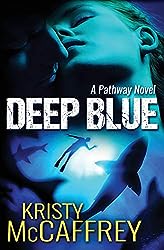 Don’t miss this first book in a suspenseful new series!!

In the deep blue ocean lives an ancient predator…

Dr. Grace Mann knows great white sharks. As the daughter of an obsessed shark researcher based at the Farallon Islands, Grace spent her childhood in the company of these elegant and massive creatures. When a photo of her freediving with a great white goes viral, the institute where she works seeks to capitalize on her new-found fame by producing a documentary about her work.

Underwater filmmaker Alec Galloway admires Dr. Mann and jumps at the opportunity to create a film showcasing the pretty biologist. As he heads to Guadalupe Island in Baja California Sur for a three-week expedition, it’s clear that his fan-boy crush on Grace is turning into something more serious. But even more pressing—Grace’s passionate focus on the sharks just might get her killed.

Grace sipped her coffee, her belly somewhat filled from half a bagel slathered with a thin layer of cream cheese. Too much food made diving difficult, so she’d get the majority of her calories at the end of the day. She gazed out the window of the salon at the flaming yellow ball cresting the horizon, biding her time until they could deploy the buoys or until a shark showed up. As she booted up her computer, her eyes kept landing on Guadalupe Island, sitting right at their front doorstep.

The ever-present grin took control of her mouth once again.

Someone let out a whoop. Grace slammed her coffee down and dashed out of the salon.

Tony stood on the upper deck with Missy and Stephie, leaning over the railing and pointing. “We’ve got a shark!”

Grace spun around and smacked into Alec. “Sorry.” His hands steadied her, but she ducked around him, leaning into the salon and grabbing the binoculars on the desk. She looped them around her neck and bolted outside, running down a set of stairs and to the fore of the boat. Alec was already on the pulpit that jutted over the water, a small handheld video camera capturing the ruckus. Grace came up behind him, scanning the water.

Grace concentrated on where Tony was pointing. A dark mass swam just under the surface, creating a sizable wake. The nearly black torpedo-shaped fish rose higher, and its skin revealed cobalt and turquoise hues against the blue sea. Grace’s heart pounded. She laughed aloud, shaking with giddiness. All her imaginings didn’t compare to that first moment when she spied these formidable and extraordinary creatures.

She brought the binoculars to her eyes. The dorsal fin—an object of terror for an entire generation raised on Jaws—broke the surface as the shark moved parallel to the boat and toward her and Alec’s position.

She squealed with delight.

Grace studied the jagged edges of the dorsal fin, but it wasn’t until she saw a notch missing in his caudal fin that she agreed with her graduate student.

“We first saw him last year,” she said for Alec’s benefit.

“He looks to be about fifteen feet.”

She nodded. “He’s a beauty. We frequently caught him in the company of two females. We called them Mary Ann and Ginger, but they usually chased him off.”

“From what I hear, the females do seem to dominate around here.”

The Professor glided beneath the narrow walkway that held them. They both whirled to the other side.

Grace kept the shark dead-center in the binocular eyepiece as it swam away, awe swelling her chest, increasing the pounding of her heart. “They’re so powerful. It’s breathtaking really.”

“What’s that?” She strained to keep the Professor in her sights as he glided farther away from the boat, finally disappearing.

“Who he preferred—Ginger or Mary Ann.”

She let the binoculars dangle around her neck and looked at him, taking a deep breath as the excitement of the moment dissipated. “It was hard to tell. Maybe we’ll solve that puzzle this time.”

“Nah,” Double D said from behind them. He’d obviously heard their conversation. “If the Professor is the stud I think he is, then he’ll definitely go for the flashier woman.”

Amusement danced in Alec’s eyes. “Too much work. A man prefers his woman to be more down-to-earth.”

“Depends what you want that woman for.”

Kristy McCaffrey has been writing since she was very young, but it wasn’t until she was a stay-at-home mom that she considered becoming published. A fascination with science led her to earn two mechanical engineering degrees—she did her undergraduate work at Arizona State University and her graduate studies at the University of Pittsburgh—but storytelling has always been her passion. She writes both contemporary tales and award-winning historical western romances.

With the release of Deep Blue, Kristy is launching The Pathway Series, a project she’s been developing for years. Each book will combine her love of animal conservation and environmental awareness, while also shining a light on unique and diverse locations around the world. Come along for high adventure with honorable heroes, determined heroines, and Kristy’s trademark mysticism.

An Arizona native, Kristy and her husband reside in the desert where they frequently remove (rescue) rattlesnakes from their property, go for runs among the cactus, and plan trips to far-off places like the Orkney Islands or Machu Picchu. But mostly, she works 12-hour days and enjoys at-home date nights with her sweetheart, which usually include Will Ferrell movies and sci-fi flicks. Her four children have nearly all flown the nest, and the family recently lost their cherished chocolate Labrador, Ranger, so these days a great deal of attention is lavished on Ranger’s sister, Lily, and the newest addition to the household—Marley, an older yellow Labrador they rescued in early 2018. Both dogs are frequently featured on Kristy’sInstagram account, so pop over to meet her canine family.

“When we try to pick out anything by itself, we find it hitched to everything else in the Universe.” – John Muir