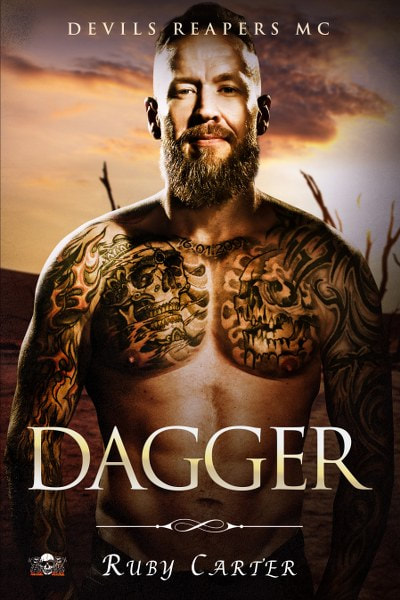 If there’s one thing I’ve always known, it’s that I need to dominate; in my club, over our rivals, and in the bedroom. I get what I want, and I’m always in control, chasing the pain and pleasure I crave with as many women as I can get—or at least I was, until I met Kelly fuckin’ Davis. She’s strong-willed, relentless, and she pushes my buttons like no other woman I’ve ever met. She may be 15 years younger than me, but I can’t quench my thirst for her. I want—no, I need—to own her ass…
He tells me I’m too young for him and that I shouldn’t play games, but no man has ever made this ‘little girl’ feel like Dagger does. I’ve needed more of him since the first time he showed me his deepest desires, but he refuses to give into the hunger between us. Luckily, even an ultra-alpha like him is no match for this feisty Latina. I need to be dominated as much as he needs to dominate, and it’s time to show him who’s really in control…
Determined that no woman can tame him, lifetime bachelor Dagger shuns relationships for a life of casual hook-ups with any woman he wants—except one. As much as he tries to fight his forbidden desire for her at first, Kelly Davis has other ideas, and Dagger finds his possessive instincts starting to win out. However, just as Dagger begins to surrender to the chemistry between them, a cruel twist of fate threatens to rip it from him forever.
As MC and Mafia collide and the stakes of club life become higher than ever, will Dagger’s desire for Kelly give him the courage to form an alliance from an unlikely source, or will his need for control spell the end of their connection—and life as he knows it—for good? Find out in the darkly explosive finale of author Ruby Carter’s Devils Reapers MC series, Dagger.
Goodreads * Amazon 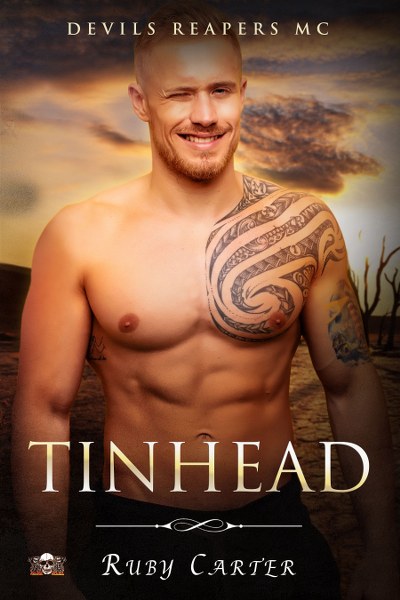 To his club, Tinhead is the joker of the pack. One of the Devils Reapers MC’s most desired men, he has no shortage of admirers or bedmates, but eyes for just one woman; the elusive Jade Smith, whose connection to him runs deeper than he thinks…
All too aware of their shared past, Jade is determined to refuse Tinhead’s advances at every turn, sure she has no interest in the MC’s confident clown. When she is faced with the opportunity to get even, she is shocked to find that revenge isn’t as sweet as she thought it would be and all is not as it seems.
As Jade learns that this clown is more than his cover, she finds herself drawn ever closer to Tinhead, and it becomes clear that his head is a minefield that only she can navigate. As Tinhead’s past threatens to overwhelm him and he stares down the barrel of impending doom, both love and life are put on the line.
When faced with an ultimatum, will the Devils Reapers’ newest member find the strength to follow his heart and fight for his future, or will the weight of his former life prove too much to bear?
Find out in the emotional fourth instalment of The Devils Reapers MC series.
** Note all books can be read as standalone.**
Goodreads * Amazon 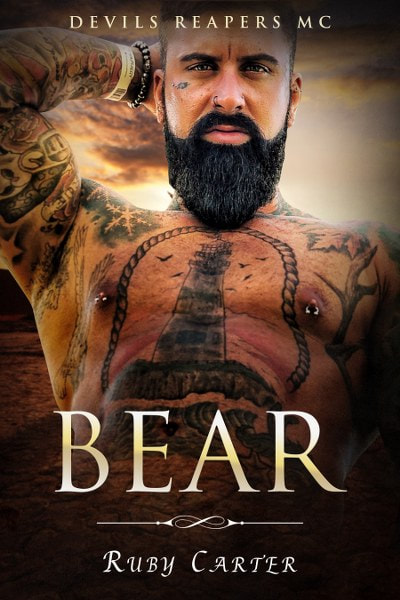 On the outside, it seems as though Jenna May Smith has her life together. A hard worker, she has a successful business and the most loyal friends she could wish for, but the truth is deeper than that. Damaged by the ghosts of her past, she has built walls around her heart to protect herself and push men away, never truly letting anyone in.
When she agrees to go on a date with Bear Jameson-a fiercely loyal tough guy with a soft center-she plans to make it a one-time thing, but sweet-talker Bear seems smitten and has other ideas.
As they grow closer, Jenna learns that there’s more to Bear than meets the eye, and she finds herself falling for him…hard.
The magnetic bond between the two souls quickly grows too strong to fight, and they become caught in the middle of a passionate romance, but when tragedy strikes, will love truly be enough to conquer all?
In the thrilling third instalment to the Devil’s Reapers MC series, Bear, the stakes of love are higher than ever. Will Bear and Jenna’s whirlwind romance stand the ultimate test, or will heartbreak sever their connection for good? There’s only one way to find out…
**Only $1.29!!**
Goodreads * Amazon 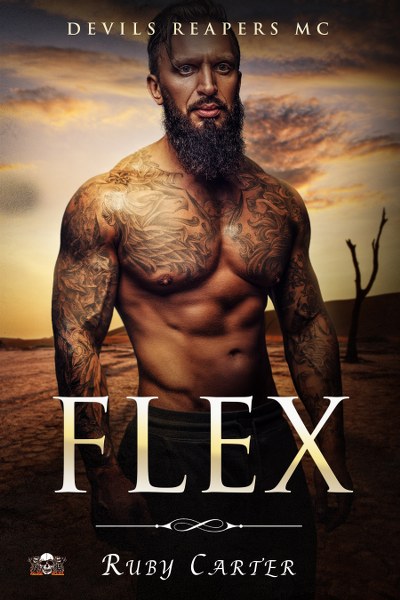 I’m vice president of the Devils Reapers MC, and I’m dead inside. Or at least I was… Before her…
For five long years, I lived shrouded in darkness after my light, my life, was ripped from me.
That all changed when she walked in. All of a sudden, I was as helpless as a moth to a goddamn flame. Her spunk, her attitude, her heart… I want all of it. I need all of it. I need her!
And yet, I know I can’t have her. MC business is risky – Hell, my whole damn life is risky, and I can’t let her get hurt.
No matter how much I want her, and I DO want her, I have to save the only one who could ever truly save me!
Flex. Taken in by the fierce, beautiful Zara, Flex is faced with an impossible choice – follow his heart for an opportunity to save himself, or protect her from the dark truth?
When a sudden turn of events puts his life in danger, will he be strong enough to confront what he really wants, or let himself be consumed?…
From novelist Ruby Carter comes the awaited second installment in the Devils Reaper’s MC series.
**Only .99 cents!**
Goodreads * Amazon 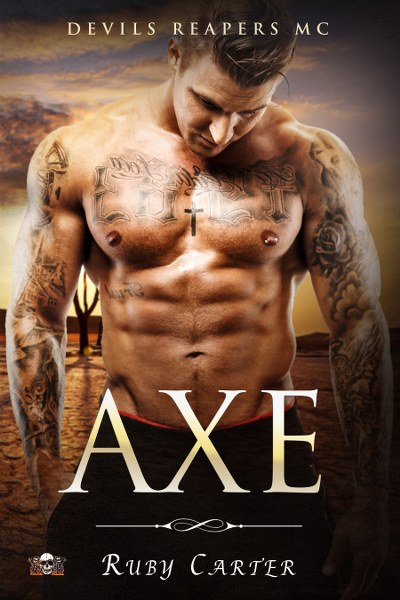 Dani Cooper is a small woman with big ambitions… and even bigger worries.
Determined to escape her past, Dani throws herself into her dream of becoming a tattoo artist, but quickly finds herself falling into the lap of Axe Cole, bad boy biker and president of Devils Reapers MC. Though she finds herself instantly drawn towards him, past experiences keep her from giving in – until it becomes clear that fate has other ideas.
When a traumatic event finds Dani leaning on Axe harder than ever, old rivalries reignite, and a terrifying threat looms, Axe finds himself faced with a choice: follow his heart and give himself to the woman he loves, or protect his Pixie by walking away for good.
**This is an extended edition of my debut novel – the first in Devils Reapers MC series – Axe. Boasting a whole host of new content and reimagined scenes inspired by my true life experiences. Axe can be read as a standalone or in a series. **
**Get it FREE!! **
Goodreads * Amazon 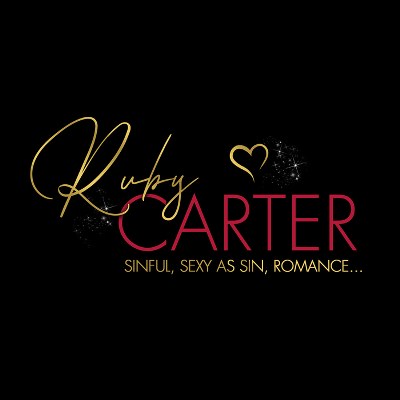 Hi I’m Ruby Carter…
I am a new author trying to find her feet as she starts her new and exciting journey…
I’m a loving, fun and happy go lucky girl that took a shot at writing.
After reading forever and a day, I decided to take the leap and have a go at it.
My first book Axe – Devils Reapers MC was a very personal and semi autobiographical book. It’s been an amazing experience already.
You can come and find me on Facebook under Ruby Carter, Twitter Ruby Carter Author and come and say hi!!! : )
Love and hugs,
Ruby ♥x
Facebook * Twitter * Instagram * Bookbub * Amazon * Goodreads

Follow the tour HERE for special content and a giveaway!
$20 Amazon gift card,
ebook set of the series
– 1 winner each!
a Rafflecopter giveaway 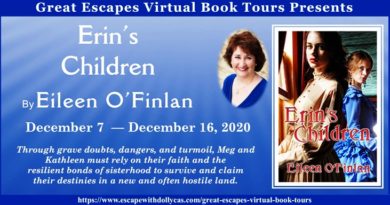