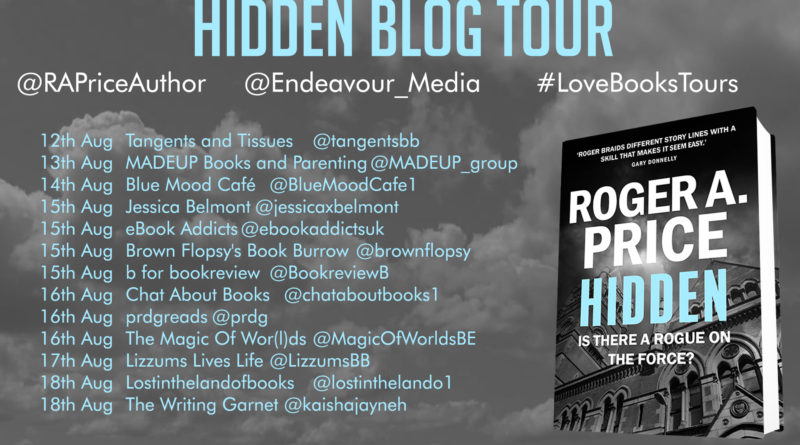 #BlogTour Hidden by Roger A. Pierce 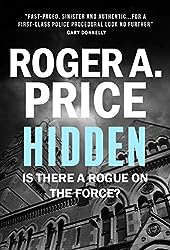 Vinnie’s romantic holiday did not go as planned. There was an assault, his companion was threatened and the police asked them to leave.

And when Vinnie returns to his police job in Manchester, things don’t get much better, as he finds himself at the heart of an investigation that stretches from Manchester to all corners of Europe. Women are being trafficked into the UK and forced into prostitution, and while the police are diligent in their enquiries, they seem to have a rogue in their midst.

As events unravel, the lines between good and bad, police and criminals, seem to become more and more blurred… and the stakes for all involved are getting higher.

Hidden is Book 3 in Roger Price’s the badge and the pen series, but it can equally be read as a novel in its own right. Existing fans of Vinnie and Christine are bound to love it, but Hidden is also perfect for crime and police fiction lovers, and anybody who loves a fast-paced, gripping story.

EXCERPT FROM CHAPTER ONE OF HIDDEN BY ROGER A. PRICE.

Vinnie’s eyes closed as his head popped through his T-shirt’s neckband, he’d no idea why; an involuntary thing. But before he could open them he felt hot sticky fluid spray across his face. He also heard a shrill scream right in front of him.

Eyes wide open, he could see a young woman dart from the trees, which were only a couple of feet in front of him, but before he could react she was off down the beach at an impressive pace. He was about to go after her when he realised that what was on his face smelled metallic. It was blood; he knew that even before his dabbing fingers confirmed it. He then heard a second scream, this time coming from Christine, as she shot to her feet.

In this moment he grasped something else. The blood had not come from the woman. Directly in front of him, at the treeline, stood a huge swarthy-looking man with an eastern Mediterranean complexion. His right hand cradled his left wrist as blood seeped through his fingers. Judging by the spray that had hit Vinnie, the man’s injury might be serious, an artery even. He stepped forward, his first concern being to help the victim. The assailant would have to wait. She was long gone, anyway.

‘That bitch will pay with her life for that,’ the man said.

‘Never mind that, let me have a look at your wrist,’ Vinnie said. He could see that the man was exerting great pressure in order to stem the flow of blood. He may well have nicked an artery.

Vinnie quickly whipped his blood-stained T-shirt off and wrapped it around the man’s wrist as tightly as he could, using the short sleeves to tie a knot and secure the makeshift bandage. He guessed that the man was in his forties, certainly a lot older than the woman. He also noticed a wagon wheel-like tattoo on his injured forearm. He then heard a calmer Christine on her mobile phone calling the emergency services.

‘No police,’ the man shouted past Vinnie towards Christine, in what Vinnie now realised was a heavily-tainted eastern European accent.

Vinnie exchanged surprised looks with Christine before he turned back to see the injured man disappear through the trees. He was running as if his life depended on it.

‘Strange indeed. Victims don’t tend to do that.’ He then turned to face the direction in which the woman had run. He hadn’t had much chance to see her, and then only from the rear. A young, olive-skinned woman, perhaps early twenties at most, with long rolling black curly hair, wearing a flowing skirt and ruched  blouse with short, white puffed sleeves. Then he saw something glisten in the sand 10 feet away. A short-bladed knife, with blood all over it.

Roger A. Price is a retired detective inspector who had been in charge of a covert unit, which received national acclaim for its successes in engaging those who openly sold Class A drugs.
Prior to this, he’d been in charge of the C.I.D. at Preston, having first led a dedicated informant unit.
He also worked on murders, drugs squads, and the regional and national crime squads, often in covert roles across the UK, Europe, and the Far East, receiving several commendations.

A member of the Crime Writers’ Association he now writes crime thrillers in novel and script and uses his previous professional experiences to add gritty realism. Represented by SMA Talent.

#BlogTour The Next Big Think! Possibilities by Azza Ezzat

One thought on “#BlogTour Hidden by Roger A. Price”