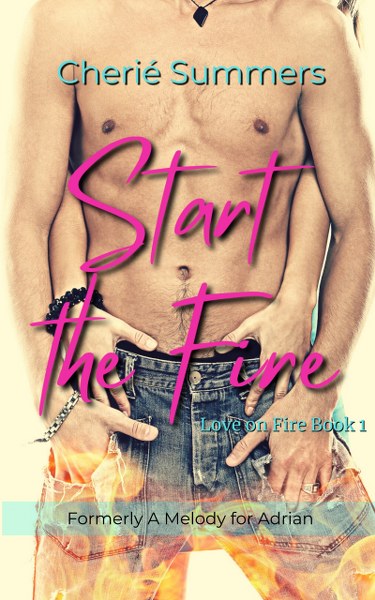 Adrian “Bolt” Hall doesn’t give a shit about anything….except music.
His goal? Rock stardom.
In 1981, he is on his way. He has the look, the attitude, and a band that kicks ass.
The last thing he needs is a distraction. And that’s just what SHE is.
From the moment he sees Melody wiggling her ass across the high school parking lot, he can think of nothing else. He vows to make Melody his.
There’s just one problem. She can’t stand the sight of him.
Melody Stewart grew up in a life of privilege, with wealthy parents who shipped her off to boarding school when she was younger. As she returns to public school for her senior year, there’s only one thing on her mind…fitting in.
She’s not trying to attract anyone’s attention, least of all that of an angry punk rocker intent on taking her virginity. A guy who will use her, then discard her as he has done to countless others.
Melody’s determined to resist Bolt’s advances…even it if means denying her own attraction to the spike haired, rockstar wannabe.
♥♥♥ Start the Fire is a rockstar romance about falling in love and making love for the first time. If you love opposites attract, enemies to lovers, bully, new adult romance, Start the Fire will be a great addition to your library. ♥♥♥
Author’s Note: This book contains a scene of sexual violence that some might find upsetting. Another character will step up to stop it. (This scene is further discussed in future books as these characters grow and mature) Other content matter includes child abuse and the deaths of loved ones.
**Only .99 cents!!**
Goodreads * Amazon 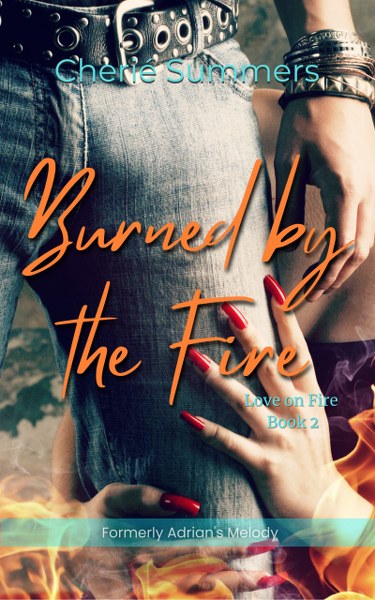 Burned By the Fire
Love On Fire Book 2

Five years. Five long years without HER.
Melody. The only woman to ever break down Adrian’s icy walls and capture his heart.
And not just Melody. But Adrianna, too. His child. A daughter he never knew existed.
Until now. And now, they can begin planning a future together.
But, Adrian’s plans to spend time with his family are thwarted by a contractual agreement.
With his band, Lightning, forced to hit the road again, Adrian’s world spirals out of control.
Melody becomes the object of desire for one of Adrian’s longtime friends.
Adding fuel to the fire, is Adrian’s former lover, who will stop at nothing to get into his bed once again.
And when Adrian’s long lost mother reenters his life, the situation becomes even more explosive.
As the tour moves from city to city, the doubts and mistrust build. Suspicion turns into arguments. Arguments turn into fights. Fights become a separation.
Adrian and Melody’s relationship will be tested in the cruelest of ways.
Is their fiery love destined to turn into ash?
♥♥♥ Burned by the Fire is a rockstar, new adult, erotic romance filled with drama. It will take you on a roller coaster ride of emotions as Adrian and Melody navigate (sometimes successfully and sometimes not) the most heartbreaking situations.♥♥♥
Author’s Note: This book contains sex without consent and deaths that some readers will find upsetting. Other content subject matter includes parental abandonment, romantic obsession, suicide, violence, drug abuse, anger and jealousy. The events of this book will change the characters in profound ways that will resonate and become important in future books of the series.
Goodreads * Amazon 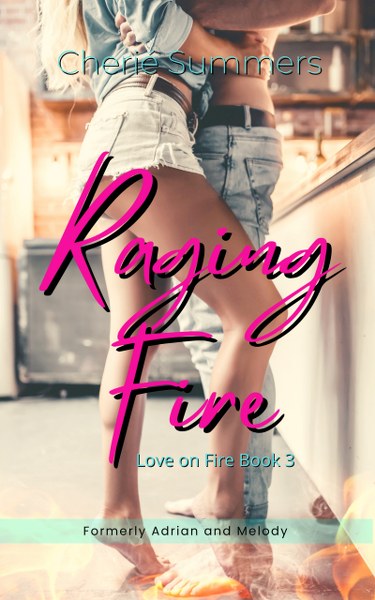 It’s been five years since Adrian “Bolt” Hall was given a second chance at life and he’s made the most of it.
The anger and bitterness of his youth…vanished.
The drama and heartache of the past…gone.
Together with his gorgeous wife, Melody, Adrian has created a loving home and surrounded himself with loyal friends. And just when he thinks life can’t get any better, his former band, Lightning is offered an opportunity to make a comeback
There’s only one thing missing from this idyllic life, and it’s something Melody desperately wants again….a child. But, no matter how many times Adrian makes love to her, his wife can’t seem to get pregnant.
With his virility called into question, Adrian’s perfect world begins to crumble.
A tragic death reopens old wounds from his childhood.
The band’s search for a new drummer leads them to an excellent candidate—one with a very close connection to the man who raped Melody.
Long held secrets are revealed that not only break the hearts of his loved ones, but even puts the life of his best friend in danger.
And when Melody begins receiving myserious threats…it’s all Adrian can do to keep it together.
With each new challenge, Adrian’s resolve to remain the good man he has become is challenged. He struggles with the temptation to slip back into his old ways of jealousy, mistrust, and anger…the old ways that destroyed his band, took his children from him, and nearly ended his relationship with Melody.
Can Adrian and Melody keep their fiery love raging? Or are they destined to be haunted by the ghosts of the past?
♥♥♥ Raging Fire is a rockstar, erotic romance filled with drama. The friendship that binds this band together is rock solid and their loyalty to one another is what keeps them going even in the worst of times. Be prepared for highs, lows, and a lot of sexiness from our main characters, Adrian and Melody.♥♥♥
Author’s note: This book contains a scene of sexual violence that some readers may find upsetting. Other subject matter includes infedelity, parental abandonment, gun violence, domestic abuse, infertility, jealousy, and anger.
Goodreads * Amazon 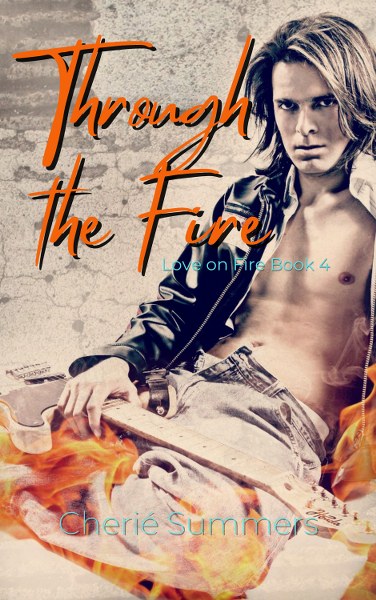 Through the Fire
Love On Fire Book 4

Keith “Kat” Williams is the best friend everyone wants.
As bassist for the rock band, Lightning, Kat’s level head and cool composure were the glue that held the band together, even in the worst of times.
His fierce loyalty to his best friend, Adrian, kept the band’s lead singer on a path that eventually led him to marital bliss with his wife, Melody. Kat has always envied the love that Adrian and Melody share because it’s something he’s been unable to find….until now.
Kat believes he has found the love of his life with Annette, a woman he’s had a crush on since high school.
Annette has left her unfaithful husband and is building a new life for herself and her three sons. In Kat, she sees a gorgeous man with a good heart. One who has always been there for her, even when her husband was not.
As Kat and Annette begin to look beyond the boundaries of friendship, they begin to see the possibility of a relationship that could last a lifetime.
There’s just one problem…her husband wants her back.
Despite all his failures as a husband and father, Adam Bryant promises Annette they can pick up the pieces and put their family back together. But when his wife repeatedly refuses him, something snaps, and a dark, sinister side of Adam emerges—one willing to destroy every relationship Annette has ever had, and hurt everyone she loves.
Including their sons.
Can Kat and Annette make it through the fire?
♥♥♥ Through the Fire is a rockstar, erotic romance. There’s lots of drama, a hallmark of my books. If you find yourself laughing one minute, and then in tears the next, I’ve done my job. Kat and Annette will face many obstacles to get to their happy ever after, but with their loyal friends always there for them, they just might make it.♥♥♥
Author’s note: This book’s content matter includes the subjects of alcoholism, divorce, infidelity, the outing of a gay character, rape, suicide, jealousy, and anger.
Goodreads * Amazon 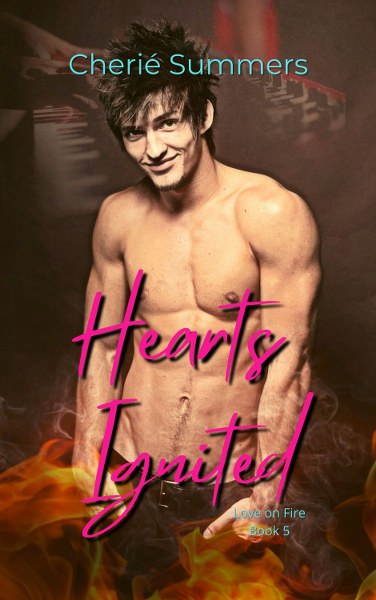 Silly…goofy…clown…jokester…womanizer
John “Buzzy” Thomas, keyboardist for the band, Lightning, has been called all these things. What he’s never been called is someone’s boyfriend. Or a man in love.
While his bandmates have settled or slowed down from their promiscuous days, Buzzy still enjoys the sexual perks of being a world-famous musician.
Then he meets Danielle, a young woman fleeing from an abusive marriage, and unfamiliar feelings begin to stir in his heart. He longs to protect Danielle and make certain she never hurts again.
Danielle Jones has had her share of disappointments. From a young age, life dealt her a difficult hand. But, with the help of Melody Hall and Douglas “Dagger” Meyers, she and her young son, Tyler, escape their house of horrors and begin again. For the first time, Danielle feels in control of her life. She has a job she loves and plans to continue her education. Even though she loves Buzzy, she sometimes feels smothered. And because of her disasterous past, she keeps him at arm’s length, not able to fully commit.
With determination, love, and a healthy dose humor, Buzzy breaks down Danielle’s protective wall. But, as soon as she gives him her heart AND body, a friend of Buzzy’s comes forward with an announcement that alters all their lives.
Devastated, Danielle runs away from the pain of another broken heart while Buzzy sinks into despair as he struggles to do the right thing.
The band family rallies around the couple, trying to help them find a way back together. But only Buzzy and Danielle know if their hearts can heal and find their way back to one another.
♥♥♥ Hearts Ignited is a rockstar, erotic romance about two people touched by tragic events coming together and finding love, only to lose it. This single mom, second chance romance is sweet, funny, AND sexy.♥♥♥
Author’s Note: This book contains a death readers may find upsetting. It also contains the subject matter of domestic violence and sexual abuse.
Goodreads * Amazon 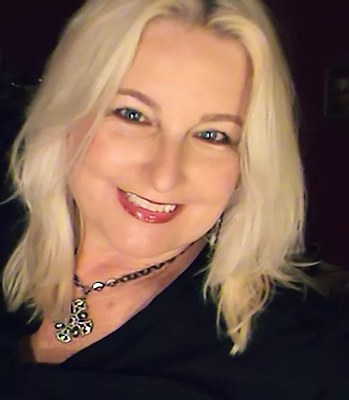 As a child, Cherié Summers, dreamed of being a writer. And it’s in her dreams that Ms. Summers finds inspiration. At age eighteen, a dream she had about her favorite rock star, Billy Idol, turned into her first novel, A Melody for Adrian. But, Ms. Summers didn’t get serious about publishing that novel until she turned fifty. Six years later, she has seven published books to her name.
Writing is only one of Ms. Summers’ creative passions. She is also an avid photographer, specializing in portrait photography of animals, nature, and people. Another creative outlet she revels in is belly dancing. She teaches the art of Middle Eastern dance through her local community education program. She also enjoys traveling to music concerts and pop culture conventions with her daughter, Kayla. Atlanta is a favorite destination, and Ms. Summers’ dream is to move there when she retires from her day job.
Website * Facebook * Twitter * Instagram * Bookbub * Amazon * Goodreads 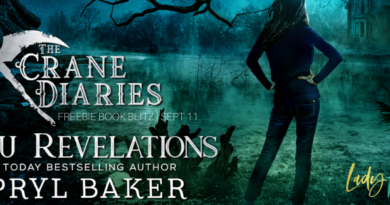