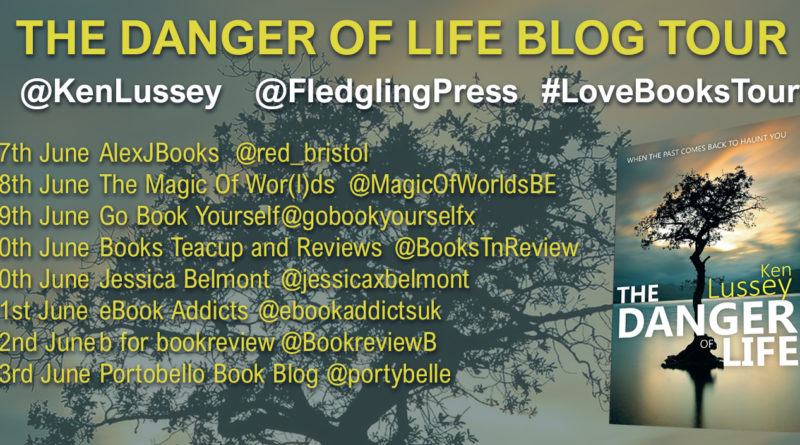 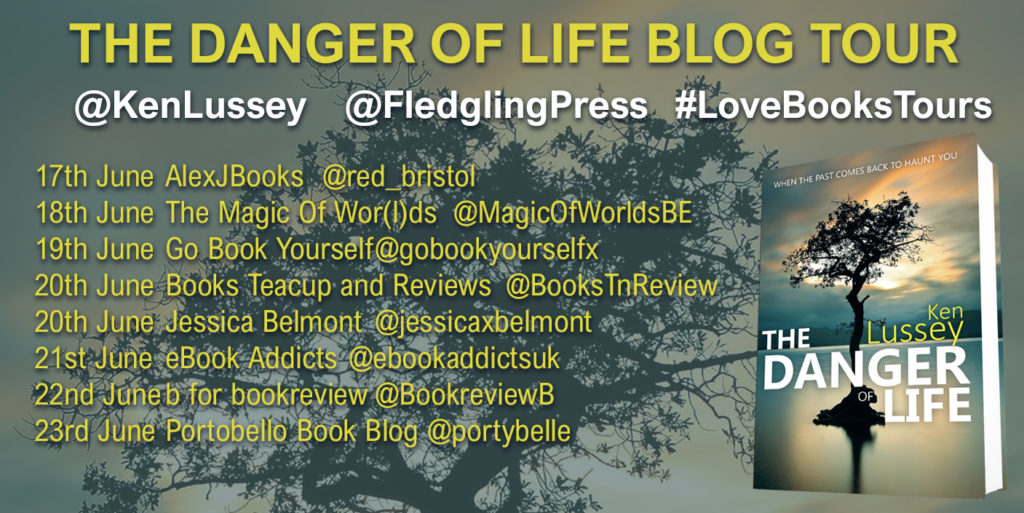 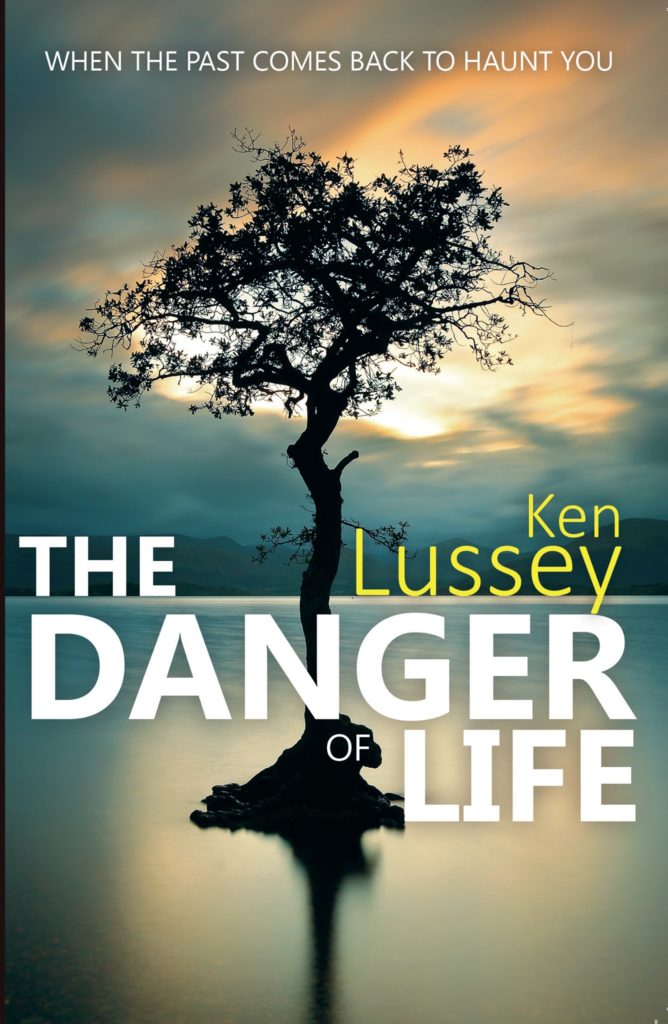 It is late 1942. Group Captain Robert Sutherland’s first week in charge of Military Intelligence 11’s operations in Scotland and northern England is not going smoothly. A murder at the Commando Basic Training Centre in the Highlands is being investigated by one of his teams, until events take an even darker turn that draws Bob in personally. He is also trying to discover who was behind an attempt to steal an advanced reconnaissance aircraft from a military airfield in Fife, an investigation made no easier by the perpetrator’s death. The complication he could really live without comes via a telephone call from Monique Dubois in MI5. An operation she’s been running in Glasgow, without Bob or anyone else knowing, has gone badly wrong, and she wants him to intervene before it is entirely compromised. The Danger of Life is a fast-paced thriller set in Scotland during the Second World War. It is Ken’s second novel to feature Bob Sutherland and Monique Dubois and picks up not long after the end of his first, Eyes Turned Skywards. The action moves back and forth across Scotland, with much of it set in Lochaber, where the present war intersects with another conflict that took place two centuries earlier: with deadly consequences.

Bob felt distinctly overdressed when he and Lieutenant Dixon climbed into a car with Lieutenant Colonel White outside the main entrance of Achnacarry Castle a short time later. But there was no denying that the duffel coat had the edge on his RAF raincoat when it came to keeping him warm.

The car took them a short distance down to the gates that gave access to the castle grounds from the road alongside Loch Lochy. Bob wasn’t quite sure where they went then, but they seemed to drive for no more than a few hundred yards before they got out of the car.

White led the way. ‘We’ve got an observation point on the bluff overlooking the bay from the south. Here we are.’ Bob followed him into a heavily sandbagged roofless structure. He was aware of the vague shapes of other men moving on the bluff around them but surprised by how quiet they were.

White said, ‘It’s a full moon tonight, which is why we’ve selected it for the exercise. And it looks like the weather forecast for reasonably clear skies is coming good. What that means is that the men taking part in the landing have got enough light to prepare for the exercise, get into the boats, and then position themselves well out on the loch. It also means that those of us on land will be able to see what’s going on. With live ammunition being used, it’s important that the attacking force stays within certain agreed pathways, and for that reason members of my own staff accompany them. We’ve got clear rules in place to ensure that if any of the attacking boats stray into the fields of fire of the defenders’ weapons, those weapons can cease fire before men are killed. It works much better, though, if my staff on the boats make sure that doesn’t happen.’

Bob could dimly see groups of men boarding boats down on the shore below them, in almost complete silence, while others rowed out into the loch. It was the silence that was the most striking thing. Large numbers of men were deploying without any obvious need for spoken orders, and with very little clanking of weapons or scraping of boots. Despite all the activity in the bay below and around him, Bob could hear the breeze moving the branches of the trees a little to the south of the observation point.

‘How many men are involved tonight, Edward?’ asked Bob.

‘Around 260, plus over a dozen of their officers and some of my own staff’, said the lieutenant colonel. ‘This exercise tends to be regarded as the culmination of the Achnacarry course. We’ve got two groups of trainees, a Scots Guards detachment and a 24th Guards Brigade detachment, who are here on short courses of a fortnight or less. They leave on Monday, and tonight is their chance to take part in the night assault landing.’

‘What boats do they use, sir?’ asked Lieutenant Dixon.

Lieutenant Colonel White said, ‘We have a range of craft we use for training, but tonight the men will be using collapsible assault boats. These boats offer no protection from enemy fire, unlike the landing craft we also have here which have thin armour, and they need to be rowed, but they are totally silent. We find they work best for the night assault exercise because they leave the occupants feeling totally unprotected and vulnerable. The aim of the exercise will be for the landing forces to come ashore, clear the beach, and then storm the high ground behind the road over there. At that point the heavy machine guns you will shortly see in action will change their role. Until then they play the part of defenders firing at, or rather just over, the attackers. But at that point they start simulating covering fire for the attackers, firing over their heads as they advance inland. The culmination of the exercise will be the demolition of a building we’ve erected for the purpose on the top of the hill. The attackers will then withdraw, get back into their boats, and paddle out into the loch, still under enemy fire.’

Bob again sensed men around them but had no idea of how many. It was still very quiet, with just the occasional splash from a misplaced oar as the boats moved out towards the centre of the loch.

‘Any moment now,’ said White. In the moonlight, Bob could see that the dark shapes of the fleet of boats on the loch had turned and were picking up speed as they moved back towards the shore. A whistle was blown somewhere near Bob, and all hell was unleashed. A volley of flares was fired into the air and what sounded and looked like three or four heavy machine guns opened fire from points along the shore. Bob could see tracer rounds passing over the heads of the men in the boats, forming a criss-cross pattern because of the widely separated locations of the guns. He was grateful to be viewing the spectacle from his vantage point rather than from one of the boats.

And then, close by, Bob heard the highly distinctive sound of mortars being fired. Some of these produced large flares that hung below parachutes above the invading fleet, while others were clearly firing live high explosive rounds – detonations could be heard from out on the loch, followed by columns of water being thrown high into the air around the oncoming boats. Bob realised why it was so important the boats followed their allocated paths to the shore. A live mortar round landing in one of the flimsy craft would have catastrophic consequences.

The attackers’ boats seemed to Bob to be moving agonisingly slowly, and he could only imagine how it felt to those on the receiving end of the fire from the shore. Finally, however, they closed with the beach, at which point the intensity of opposing fire seemed to increase, and now Bob could see explosions amongst and between the incoming boats, as grenades were thrown by figures he could see down on the shore. Then the first boats grounded and men could be seen jumping out over their prows and running up the beach. Orders were being shouted to clear the beach, and for a while Bob lost sight of the attackers as they started to climb the high ground, off to his left. Then the machine guns opened fire again, this time firing up the hill over the heads of the attackers and towards the imaginary defenders beyond them.

Suddenly Bob’s good eye was blinded by a huge flash on top of the hill, which was followed quickly by the physical concussion of the shock wave caused by the demolition of the building. Bob didn’t think he’d ever heard a louder noise and wondered if they’d hear the explosion in Fort William, the better part of 20 miles away. Perhaps they were used to this sort of thing around here, he thought.

By the time Bob had recovered some of his lost night vision, the attackers could be seen clambering back into their boats, which they then paddled back out into the loch. Again, the mortars around the observation point came to life, and again the heavy machine guns kept up continuous fire above the heads of the men in the boats. Then a whistle was blown by someone nearby, perhaps by Lieutenant Colonel White himself, and more whistles were blown around the bay. Silence descended over Loch Lochy once more.

Bob wondered how long he had been holding his breath. Lieutenant Dixon, standing next to him said, ‘Good God, sir, I’ve never seen or heard anything like that before.’

‘That’s the idea, Lieutenant,’ said White. ‘When those men out there on the loch are called upon to do that for real, they will have seen something very like it before, and many more of them will survive because of it.’

‘Well, thank you for the invitation, Edward,’ said Bob. ‘Now I understand why your ammunition bill is so large. Do the neighbours ever complain?’

‘We don’t have many,’ said the lieutenant colonel, ‘and those we have seem happy to accept what we do as a price worth paying for freedom.’

Ken Lussey spent his first 17 years following his family – his father was a Royal Air Force navigator – around the world, a process that involved seven schools and a dozen different postal addresses. He went to Hull University in 1975, spending his time there meeting his wife Maureen, hitch-hiking around Great Britain, and doing just enough actual work to gain a reasonable degree in that most useful of subjects, philosophy.

The next step seemed obvious. He researched and wrote ‘A Hitch-Hiker’s Guide to Great Britain’, which was published by Penguin Books in 1983. An inexplicable regression into conformity saw him become a civil servant for the next couple of decades, during which time he fulfilled the long-held ambition of moving to Scotland. In more recent times he has helped Maureen establish the website ‘Undiscovered Scotland’ as the ultimate online guide to Scotland. ‘Eyes Turned Skywards’ was his first novel and ‘The Danger of Life’ is his second.

Thanks to Carolyn Henry Photography for this photograph, taken at the memorial on the site of RAF Grangemouth, where the fictional Bob Sutherland was briefly based as a Spitfire pilot in late 1939.