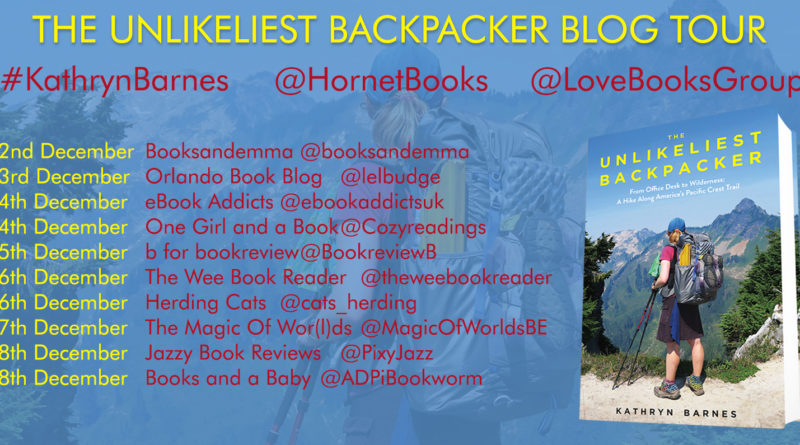 This post may contain Amazon Affiliate links, be it book or movie covers or direct links.
Each direct link will be suffixed with * or #ad. As an Amazon Associate I earn from any qualifying purchases. 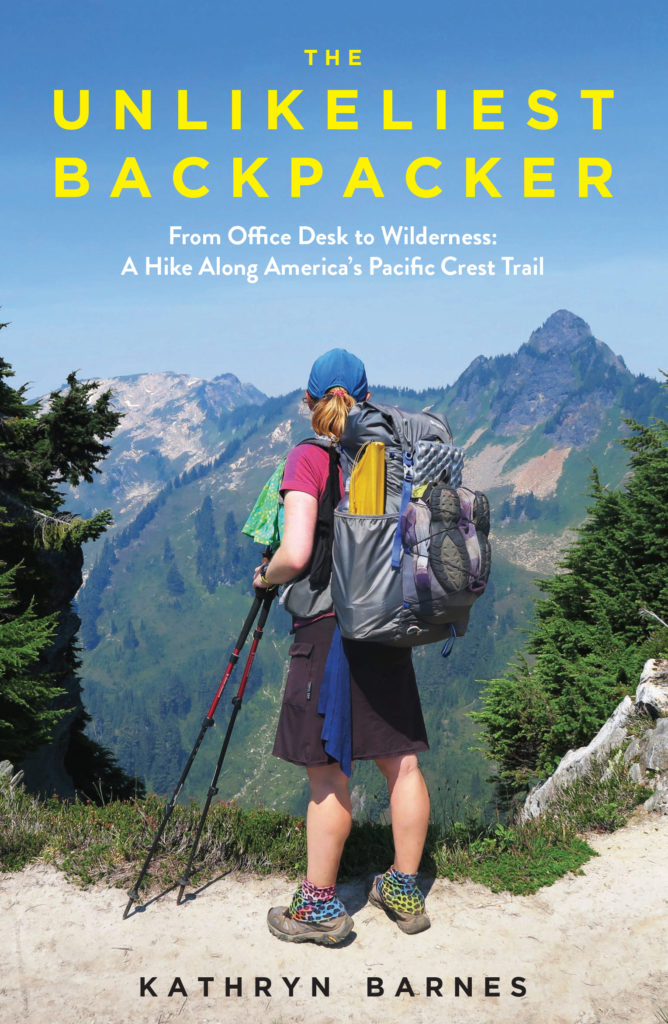 You reach a certain age. You have a lifestyle many would envy. Still, something doesn’t feel right. Life has become routine. You sense there is more out there to experience and explore with an urge gnawing away inside to do something different. But what? Before you know it, plans have snowballed – you’ve quit your city job and flown to America to begin life living in the wilderness, walking hundreds of miles with no income. ‘The Unlikeliest Backpacker’ chronicles a British couple’s absurd journey as aspiring long-distance hikers. With Canada hundreds of miles away, they must learn to backpack and survive on the famous Pacific Crest Trail. How hard can it be? Kathryn Barnes’ entertaining memoir proves you don’t have to be special, or an experienced adventure junkie to put your life on hold, disconnecting from the modern world. Pushing personal boundaries beyond the predictability of daily routine can have surprising consequences.

The trail came to an abrupt end. On a precipice high above timberline, I gingerly peered over the edge. Nothing but a sheer expanse of silent, glistening snow lay beyond. It dawned on me: this must be Devil’s Peak; what a fitting name. But while people had warned it might be a little sketchy, we hadn’t met a single person who’d faced it this season.

Awkwardly releasing my hefty backpack to the ground, I further surveyed our surroundings. The mountain’s northern aspect revealed a scene far removed from the shale and burnt trees of a few moments earlier. A sea of evergreen mountains stretched between us and Canada, yet we found ourselves stuck in a concentration of lingering snow.

“What happened to the trail?” I muttered, helpful as ever.

Without answering, Conrad reached for his phone to consult the GPS.

I began wandering the ridge, hands on hips, nervously looking up at the crisp sky. It was getting late. The afternoon sun drew long shadows, casting the snowfield into shade. We had reached the end. There was no possible way through. Just eight days into our Pacific Crest Trial adventure and this was it.

To make matters worse, our water situation was critically low. The last collection opportunity had been at a small hidden spring ten hours ago. According to the map the next water source lay less than a mile ahead; a place we should have reached by now. I instinctively checked for the reassurance of a phone signal. No service. As feared.

“Right,” Conrad began hesitantly, pointing across the white carpet nose-diving down the mountain, “the trail is buried somewhere over there… no one’s going through that, it’s way too dangerous…”

We both began scanning for footprints. In the last two days of hiking through the Sky Lakes Wilderness we had met exactly two people. But they were professional hikers who had easily overtaken us hours ago. Surely they must have left some kind of prints to follow, if indeed they had even made it this far?

Without the cover of my pack I started to appreciate how cold it was. The wind hitting my back-sweat sent chills down my spine. Conrad walked back to the edge of the icy crag, peering over its steep drop-off.

“We need to get down there,” he said, motioning a long way below to where the snow seemed to level out into wide pitches of nothingness, “the next spring can’t be far.”

Dread began building in my stomach as my mind raced through the desperateness of our situation. He continued with a bit more confidence, “yeah, it’s do-able, it looks like someone has skied down here.”

“Yeah, we can slide down, it’ll be alright.”

He was fooling no one. I shuffled over to share his view. It looked a long, perilous way down.

A defiant “F**K OFF!” – or words to that effect – formed my immediate response, assuming he was joking, but as he began shortening his telescopic hiking poles I realised he was not.

I could only watch as he strapped up before taking a seat in the snow. With his long legs dangling over the edge, he focused on calculating a route down.

The last words he said to me as he looked back over his shoulder did nothing to calm my nerves. “You’ve got to control your speed, dig your feet into the snow, and DON’T let your poles get stuck, or you’ll break an arm…. oh, and make sure you steer away from those trees!”

And with those reassuring words he was gone. I watched as his backpack-laden torso rapidly slid off into the distance, gaining momentum, a little rocky, but luckily managing an abrupt halt just before a row of pine trees far below. He was safe.

I did a quick mental fact-check. No signal. No roads out. No water. No choice, being the ultimate conclusion. I was completely alone in the still air. Conrad was not getting back up here. This was my moment.

I did the only thing I could. I buckled up my pack, grabbed my poles, sat down in Conrad’s imprint, took a deep breath to steady my pounding heart, and pushed.

Aspiring writer, entrepreneur… adult. The one vocation Kathryn has successfully nailed so far is Daydreamer. Her varied ambitions and overall life trajectory has taken a bit of a turn of late. A born-and-bred Londoner, Kathryn is discovering there is more to life than the corporate rat race. It began with a six-month trip through South America whetting her travelling wanderlust, which led to the decision to quit her job as a management consultant.

More recently she upped the adventure ante, swapping city life for the wilderness, on an ambitious walk hundreds of miles along America’s Pacific Crest Trail. The plan raised eyebrows from all who knew her – an uncharacteristic leap for a girl who refuses to sleep on the floor. The results were both brutal and awe-inspiring.

Kathryn has never been an ‘outdoorsy’ person. But the simple, reflective, time spent in the natural environment left a deep imprint. She still (reluctantly) resides in London, but the mountains are calling. She may even camp again. Someday.