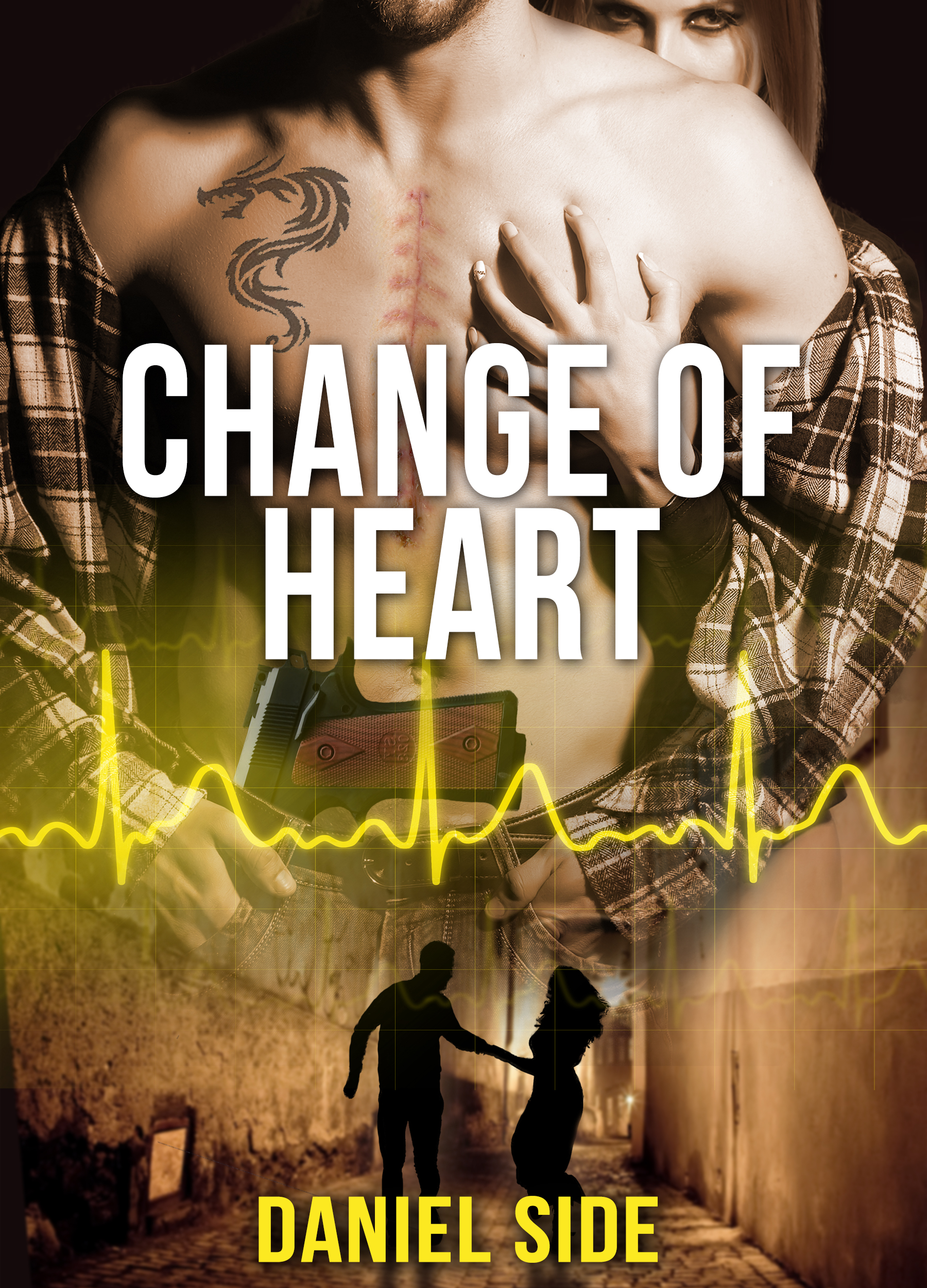 Patrick Corman, loner, ex muscle for a call girl service, struggles to stay alive and care for his institutionalized daughter. But now the danger isn’t coming from the streets. He needs a heart transplant. Shocked when, with only months to live, a mysterious benefactor offers him ‘the deal of a lifetime’, he sees it as a solution, even after reading the fine print.

When his former crime boss suspects that he is revealing information about her, and a young newspaper reporter sees him as her chance to get her own by-line, Patrick’s life and death struggle escalates. For her part, reporter Katherine Alderson keeps secret what she knows about his transplant, unaware that Patrick has his own secret, hidden in the fine print of the deal he agreed to.

Patrick’s new heart draws them together and into a conflict neither could have imagined when they discover someone has delved into their lives, using them as pawns in his own political game.  Fighting to stay alive, one shocking revelation follows another, exposing the best and worst in both of them.

For February, heart month, the money raised through the sale of CHANGE OF HEART will go to the Heart and Stroke Foundation.

“Katherine, come here.”
When she approached, he looked up at her, his eyes haggard, all energy and purpose gone. He was shivering again.
“I gotta sleep. Been a long day.” His laugh was weak. He held the gun out to her. She took it. “You gotta help me get back to the bedroom. Help me get out of these wet clothes.” His eyes were closed and he shivered uncontrollably.
Katherine stepped to him and he slowly put an arm on her shoulders. She jumped, the cold from his arm shocking her. He leaned heavily upon her and, with great effort she helped him to the bedroom. There, she turned him and lowered him to the edge of the bed. His arms hung loosely by his sides. She was suddenly startled by the thought that he might die. Climbing onto the bed, kneeling behind him, she tugged and pulled at the soggy jacket. Finally it came off, the weight of it shocking her. She looked at the loose green hospital shirt plastered to his body. It has to come off over his head. No way.
She climbed off the bed and saw that it was v-necked. Grabbing it, she pulled at the ribbing seam where it joined in a V in front of his neck. It didn’t tear, but she saw that she had loosened the threads. She tried again and was rewarded with a small tear. A third effort and it tore down the center. Katherine paused, startled by the scar down the middle of his chest, now dark blue from the cold. It matched the color of the tattoo on his chest and upper arm. He started to fall over and she grabbed him, again scared by the coldness of his skin. “Stay there, Patrick. Stay up.” She worked the clinging jersey off, guiding his backwards fall towards the head of the bed. Several red marks that were starting to form bruises covered his upper arms and stomach. The pants were loose and easier and she had them off quickly. Her eyes fell on the wet, almost see-through white underwear that clung to his genitals. Really, Alderson?
Katherine rolled him on his side and pulled the duvet cover from his side of the bed up onto him. She knew that it wouldn’t be enough. Somehow she needed to apply some warmth to him. He needed to be in a hot shower, but there was no way she could get him there. “Shit!” Katherine unbuttoned her blouse and dropped it on the floor. Slipping out of her jeans, she climbed in behind him, pulling her side of the duvet up and onto her. She gasped, the cold of his body taking her breath away when she pressed herself to him. She curled up behind him, spooning as best she could.
She was dazed: from the violence, from the dead men in her apartment, from the naked man that she was curled up with in bed. What the hell do I really know about him? That he cared for his daughter. Is that enough that I should believe what he says? What about those men? Jesus! What the hell is happening?

Excerpt 2 – Change of Heart – by Daniel Side
Behind the mammoth desk, Denetta sat sipping coffee. She rose as Patrick approached. Her body, displayed in a tight but flattering emerald green dress, could have belonged to a thirty year old. She crossed the distance gracefully, her arms held wide for a hug. Patrick smiled at the still attractive woman who had taken him from the streets and raised him. He returned the gesture and stepped into her embrace. The hug was firm as she pressed her breasts into him and touched her face against his in an air kiss. She stepped back to study him.
“It’s good to see you, Patrick. It has been so many years.”
“Yes it has. You look good, Miranda, for an old madam.” Patrick took in the sun creased eyes and full mouth that could always smile with easy charm, but reminded himself that under the quick soft smile was a ruthless businesswoman.
“You always were a cocky smart ass,” said Denetta, grinning back. She looked at Medina. “Johnny, I want you to meet Patrick Corman. You might say Patrick was your prototype.”
Medina, standing to the side, shifted his stare from Denetta to Patrick and smiled coldly.
“Come, sit down, Patrick,” she said motioning him towards the two chairs in front of the fireplace. She led the way and sat, the short dress sliding up her shapely legs. “Johnny.”
Medina walked to the fireplace, flipped the switch and the fire came alive with a small puff.
“Bring us some fresh coffee, will you dear,” Denetta said it without looking at him, watching Patrick instead as he settled in the chair beside her.
After a moment’s pause, Medina turned and left.
“I have to be honest, Patrick, you’re not looking so good these days.”
“Always good to be honest. Been under the weather a little bit lately.”
“So I hear. This heart stuff is serious shit. You should do something about that.”
“I’m working on it, but you can’t buy everything. Not even you, Miranda.”
“So we found out, didn’t we? But enough of the past. What’s done is done. I’m more concerned about your little action yesterday. One of my employees was injured. Quite badly.”
“Didn’t know he was on your payroll.”
“Come on, Patrick. You still make your living on the street. I know you still have your ear to the ground. You hurt one of my employees, not to mention the loss of product.”
“Right. Anything to make a buck.”
“Don’t play choirboy with me. You’ve done your fair share of questionable things. I know, because you did them for me.”
“Yeah, well working with the ladies was one thing.”
“It was where I started, Patrick. The high end girls were lucrative, but the hassles drove me crazy. They all turn into prima donnas. There’s a lot more money in the drug trade.”
“Yeah, but I don’t do that. You know that. I moved on.”
Denetta laughed. “Sure you moved on. Driving taxi and selling hot stuff out of your trunk.” She shook her head. “Patrick, Patrick, how far we’ve fallen.”
Patrick rose abruptly. “Are we done here?”
“Patrick.” Her tone suggested she had been offended. “What about your coffee? Johnny makes the best coffee. Even better than you did. Sure you don’t want to try a cup?”
“I’ll pass.”
Denetta stood up and stepped close to Patrick as Medina entered the room with coffee on a tray.
He could smell her perfume. Still feel the sexuality emanate from her, as it had so many years ago.
“We go back a long way, Patrick, but you can’t be interfering.” Her eyes held his, the warmth gone from her voice.
Patrick wondered what he had seen in her those many years ago, but knew he had needed someone to take care of him at that young age. “I owe you lots, probably more than I know, but that doesn’t change what happened or the way things are now. If I bump into that guy, or anyone else pushing that shit, the next time I’ll break both his legs.”
“It’s my business, and I won’t allow anyone to interfere. Not even you. No matter what the reason.” She turned to Johnny. “Thank you, Johnny. Mr. Corman can’t stay. The two of us will have coffee instead.” She looked at Patrick. “Brian will drive you to wherever you want. Good-bye, Patrick.”

Daniel is a retired school teacher who has written and produced many school plays, built his log home, restored a classic car, and spent many summers canoeing with his family in northern Ontario. Daniel’s other novels are A Lesson in Revenge and The Reedsmith of Zendar.  All three novels are available on Amazon.