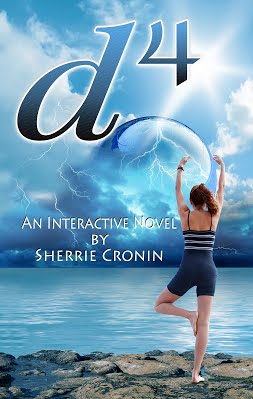 A clairvoyant young woman finds her visions of the future to be a nuisance, until she discovers that she is hardly unique. An entire group of seers has learned how to profit from their knowledge in ways that Ariel has never considered. Another group is obsessed with using their talents to understand a dark future they cannot ignore.

An alliance with either crowd looks dangerous, given that they both seem a little crazy. There is no possible way to help them both. Worse yet, each group is convinced that Ariel is more than a potential asset; she’s the one thing that they must have in order to fully succeed.

Mikkel was smiling again.
“Now what’s so funny?”
“You’ve got the world’s worst creep fixated on handcuffing you to his computer screen for the rest of your life, and you’re trying to do the right thing by someone else you hardly know. It’s not funny. It’s charming.”
“I’m glad you’re entertained,” she said.
“Don’t be that way,” he said. “I meant it as a compliment.” He reached out his hand until it almost touched hers. “Do you risk destroying the whole space-time continuum if you touch me and tell me what you see?”
“I don’t think it works that way. I see probabilities, not certainties, and telling someone just alters the landscape a little, sometimes, depending on what I say and what they believe.”
“Okay then…” He brushed his fingers lightly over the skin of her hand. “What does my future hold?”
With the light touch she felt a soft wind blow, and smelled coffee, freshly ground and perked. She premembered Mikkel lying in a hammock, enjoying the morning breeze coming off of the sea as he carefully took the hot coffee from a freckled hand that Ariel was sure was her own. Seriously? She was going to bring the man a cup of coffee?
“You seem to have a beach vacation in your future,” she said.
“That’s all? With everything I’ve got going on in my life, I’m going to go to the beach?”
“It is a ways in the future, probably months from now. That’s as far as I usually see. And it’s far from a given, one of many possibilities, really.”
“So what are the other possibilities,” he asked eagerly.
“That’s just it, I don’t know,” she said. She tried to bring up more premories, those that were closer in, or those that were the most likely other alternatives. A few snippets came to her. There were some fine dinners, an unusually good night’s sleep here and there, and a few orgasms which were kind of embarrassing to feel. All pleasant, a collage of the short but happy moments of a healthy life.
“For some reason with you I just seem to be getting the good times. It’s not like you have a lot of them,” she added. “But I’m not seeing the other stuff at all.”
“Odd,” he agreed. “Well, I guess I ought to be glad that I have anything in store then for you to see.”

Sherrie Roth grew up in Western Kansas thinking that there was no place in the universe more fascinating than outer space. After her mother vetoed astronaut as a career ambition, she went on to study journalism and physics in hopes of becoming a science writer.

She published her first science fiction short story long ago, and then waited a lot of tables while she looked for inspiration for the next story. When it finally came,  it declared to her that it had to be whole book, nothing less. One night, while digesting this disturbing piece of news, she drank way too many shots of ouzo with her boyfriend. She woke up thirty-one years later demanding to know what was going on.

The boyfriend, who she had apparently long since married, asked her to calm down and  explained that in a fit of practicality she had gone back to school and gotten a degree in geophysics and had spent the last 28 years interpreting seismic data in the oil industry. The good news, according to Mr. Cronin, was that she had found it at least mildly entertaining and ridiculously well-paying  The bad news was that the two of them had still managed to spend almost all of the money.

Apparently she was now Mrs. Cronin, and the further good news was that they had produced three wonderful children whom they loved dearly, even though to be honest that is where a lot of the money had gone. Even better news was that Mr. Cronin  turned out to be a warm-hearted, encouraging sort who was happy to see her awake and ready to write. “It’s about time,” were his exact words.

Sherrie Cronin discovered that over the ensuing decades Sally Ride had already managed to become the first woman in space and apparently had done a fine job of it. No one, however, had written the book that had been in Sherrie’s head for decades. The only problem was, the book informed her sternly that it had now grown into a six book series. Sherrie decided that she better start writing it before it got any longer. She’s been wide awake ever since, and writing away.

#BlogTour THE MERCULIANS by Caro Soles