REN GARCIA, is a Science Fiction/Fantasy author and Texas native who grew up in western Ohio. He has been writing since before he could write, often scribbling alien lingo on any available wall or floor with assorted crayons.
He attended The Ohio State University and majored in English Literature. Ren has been an avid lover of anything surreal since childhood, he also has a passion for caving, urban archeology and architecture.
His books are published by Loconeal Publishing and include: The League of Elder: Sygillis of Metatron, The Hazards of the Old Ones, The Dead Held Hands, The Machine, and The Temple of the Exploding Head. LoE Book VI: Sands of the Solar Empire was released in July, 2012 and Book VII: “Against the Druries” was released in 2013. His next set of books,  “The Shadow tech Goddess” was released in 2014 with the most recent book, Stenibelle, released in June 2015.
He currently lives in Columbus, Ohio with his wife, and their three dogs. 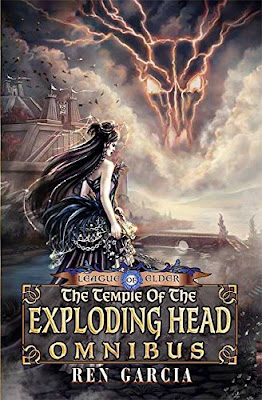 Starfarers and explorers, the League settled on Kana thousands of years ago. They found it to be a paradise, a perfect, virtually uninhabited planet waiting just for them in the cradle of space.
Lovely Kana … it was too good to be true …
But, all was not as it seemed. Simmering beneath the ground was a demented god who had soaked Kana in blood for untold ages, luring in victims, lying to them, and rejoicing in their suffering as they died at the hands of his dark angels.
And there will be blood again … From his Temple in the ground, the Horned God stirs.
When Lord Kabyl of Blanchefort, a young man troubled by the weight of the world, dares give his heart to a girl from a mysterious ancient household, one that pre-dates the League itself, he comes to know the shadows of the past that hover over her.
He comes to know of the Horned God, and for love he is destined to face him. All roads lead to the Temple of the Exploding Head, a place of evil and death, rooted in the ancient past, but also tied to the distant future.

Q&A With the Author:
1.   What do you like to do when you’re not writing?[Ren Garcia]  Not much. I play games with my wife and take pictures of clouds. I feed my dog. I hide from the Bug and hand sanitize relentlessly.


2.  What was the hardest part of writing your book, and how did you overcome it?[Ren Garcia]  Trying to stay original. I try to cover new ground with every book. After 12 epic books, finding new ground gets tough.


3. If you could travel anywhere in the world, where would it be and why?[Ren Garcia]  I’ve always wanted to see the Going to the Sun Road in Glacier National Park in Montana. It was featured at the beginning of “The Shining”, and I’ve always wanted to see it for myself, riding in the old-timey red buses chugging down the road. We were going to go this year, but the Bug happened. Maybe next year.


4.  Where do you get information and ideas for your books?[Ren Garcia]  Just comes out of my head. The advantage of writing a totally fictional universe is I get to make the rules, and I don’t have to do much research.


5. Tell us a bit about a future project you are working on? Do you have any little sneak peeks you can share?  [Ren Garcia] I’m working on finishing the Shadow tech Goddess series, and a few more that are early in the works. I’m also dabbling with a semi-fictional recounting of an old family story told deep in Texas—the old country. Such a story will get me ex-communicated from the family, but that’s ok.


6. Now that we’ve gotten to know each other, tell us a story of a favorite childhood activity you used to do during the summer. It can be long or short. Funny, sad, or somewhere in between. Just make sure it’s yours. Tell us a story?[Ren Garcia]  We were some of the original D&D gamers. The game, using nothing but pencil, paper and dice, told orally, was a mystery to our folks. It was a mystery to a lot of folks. We were forbidden to play it. The game would send our souls to Hell, they said. We should spend our time better, playing Lawn Jarts, or fiddling with the old Hit/Miss motor that took my cousin’s hand during a mishap. We played in hidden places, in old campers, in a drainage junction when it was dry and often deep in the woods where nobody could hear or see us. Eventually we grew up and went to college. Eventually, I wrote a bunch of books, all laced with the hidden days of hot summers playing D&D. 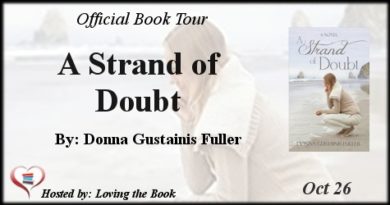 #Review A Strand of Doubt by Donna Fuller