Love Them and Leave Them
by Sue Shepherd 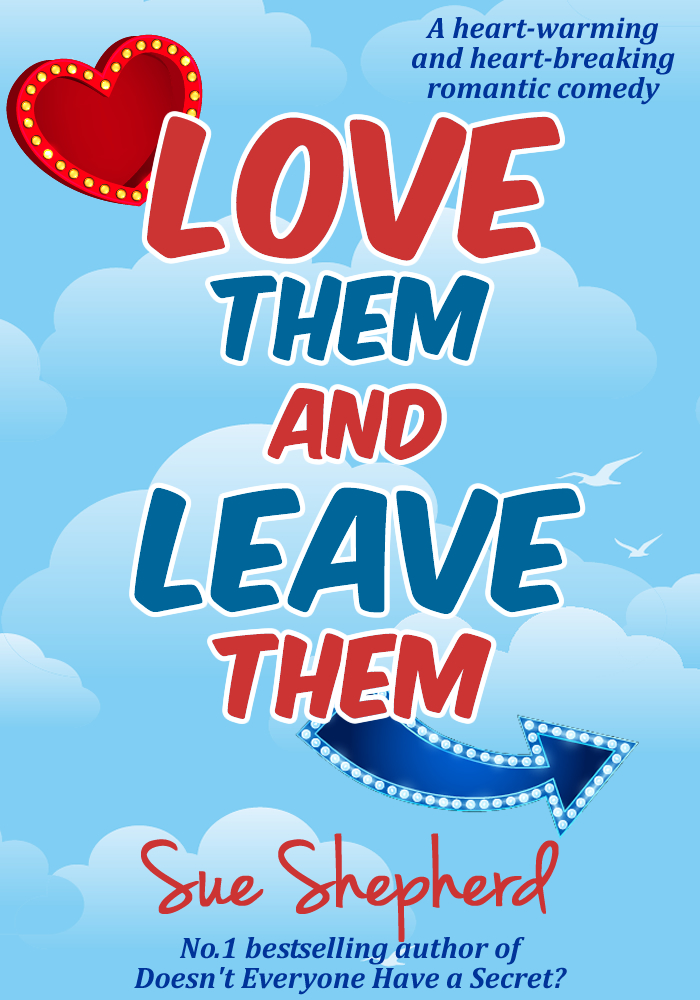 Love Them and Leave Them: Sometimes you have to leave the one you love … sometimes you’re the one who’s left behind. The new heartwarming and heartbreaking romantic comedy from the No.1 bestselling author of Doesn’t Everyone Have a Secret?

On his way home, Ed makes a split-second decision that changes the lives of all those who love him.

Six years on, Ed’s daughter, Jessie, is stuck in a job with no prospects, her dreams never fulfilled. It will take more than her unreliable boyfriend, Chris, and temperamental best friend, Coco, to give her the confidence to get her life back on track.

But what if Ed had made another decision? It could all have been so different …

Six years on, Ed’s daughter, Jessica, has a successful career, loving boyfriend, Nick, and a keen eye on her dream home. But when new clients, a temperamental Coco, and her unreliable boyfriend, Chris, walk into her life, Jessica’s perfect world soon starts to unravel.

Love Them and Leave Them is a story of love, families, friendship and a world of possibilities. Whichever decision Ed makes, the same people are destined to come into his daughter’s life, sometimes in delightfully different ways. And before they can look forward to the future, they will all have to deal with the mistakes of the past 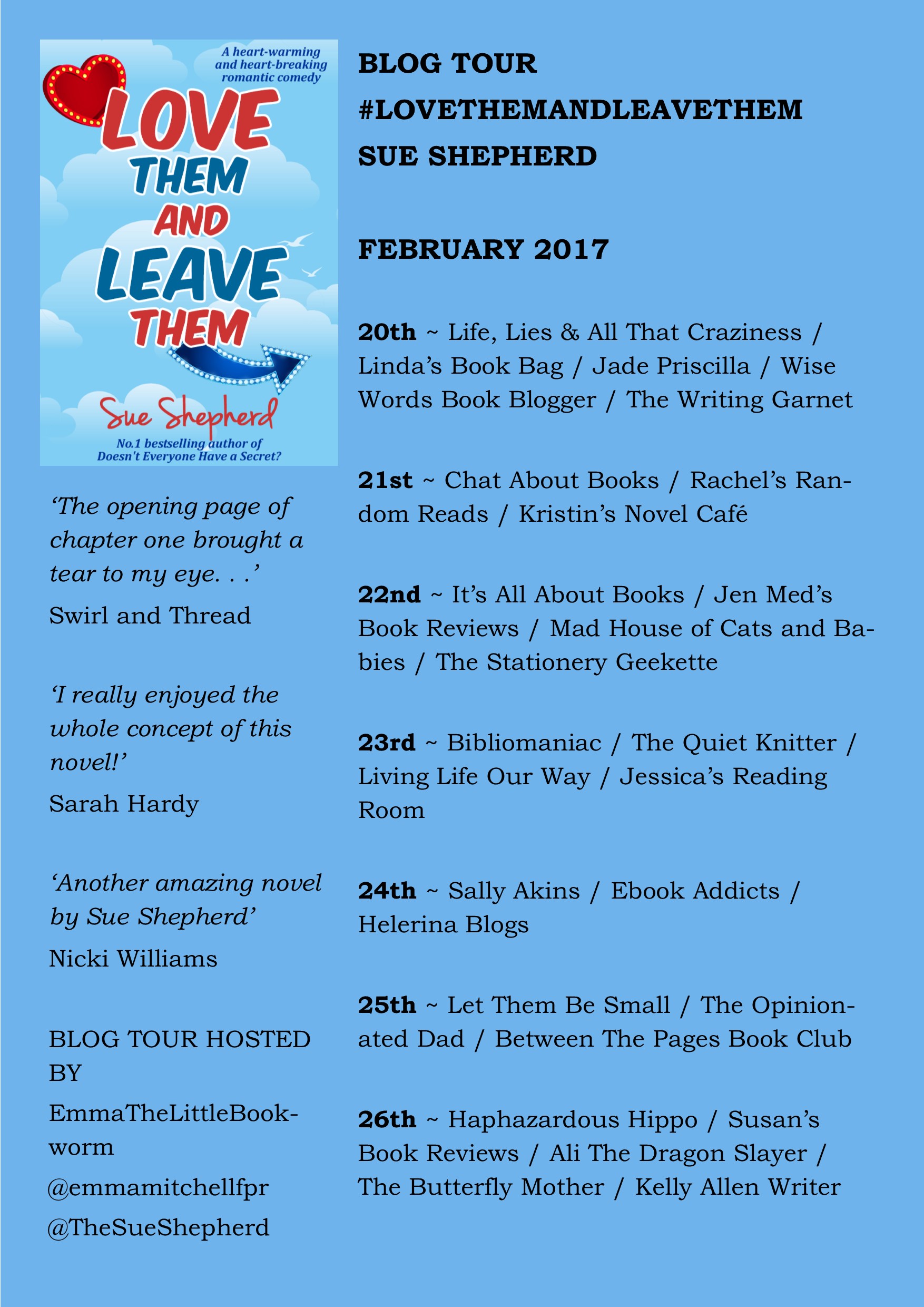 Halfway through their shift, Jessie and Coco stood outside the back of the restaurant, smoking. Jessie didn’t actually enjoy the habit, but she sometimes had one of Coco’s cigarettes simply to pass the time. Her friendship with Coco was the only good thing to come out of this place, and was most likely the only reason she hadn’t tried for a job elsewhere. Jessie couldn’t imagine moving on without Coco.
‘Is Chris coming tonight?’ Coco asked, inhaling deeply.
Jessie shrugged. ‘Chris is his own man, he doesn’t tell me when he’s going to turn up. He never has before and I can’t imagine him starting now.’
‘Don’t you get annoyed by the way he just arrives when he fancies and then buggers off again, sometimes for days?’
Jessie stubbed out her cigarette on the floor and replied, ‘Of course. You know I do. But what am I supposed to do, Coco? He doesn’t want a full on relationship.’
Also stubbing out her cigarette and turning to walk back into the restaurant, Coco seemed annoyed on Jessie’s behalf. ‘You know, you shouldn’t let him run you around like this. He makes you look like a mug, and one thing you most definitely are not, is a mug. You’re smarter than him. God only knows why you put up with all this shit. What’s he got down there?’ Coco pointed towards her crotch. ‘An elephant’s trunk?!’
Trust Coco. Jessie pulled a face. ‘I wish!’
As they passed the blind date couple, Coco asked them, ‘Are you ready to order dessert, guys?’
The couple exchanged a glance, and the man replied, ‘We’d like one Tiramisu.’
The girl blushed. ‘And can we have two spoons, please?’
Coco gave a gorgeous smile. ‘Certainly, coming right up.’
Once out of earshot, Coco turned to Jessie. ‘A shared dessert, that clinches it. I’d say it’s a “yes”!’
With a shrug, Jessie agreed. ‘I guess the shoes weren’t ugly after all. You win.’
A couple of hours later, the infamous Chris put in an appearance. The restaurant door swung open forcefully, and in he strode, followed by a waft of Paco Rabanne 1 million. A well-built man, he all but filled the doorway. Chris worked out whenever possible and liked nothing more than for girls to stare at his muscles and declare him to be ‘fit’. Now, his piercing blue eyes searched the room for Jessie. When he found her, he called out, ‘Alright, babe, you coming back to mine?’
There was a flurry of excitement amongst a couple of the other waitresses, which made Jessie feel nauseous.
Mr Rossiter approached him. As their bodies drew level they presented such a laughable image. Mr Rossiter wasn’t a tall man, neither was he wide. Standing next to Chris, he looked like a child. ‘Please don’t shout, hey Chris, I’ve still got some customers.’
‘Alright mate. No worries.’ Chris wasn’t a rude man, far from it. He could charm the birds from the trees if it pleased him to do so. He was under no illusion about his own good looks; his almost shockingly handsome face, and dark, unruly hair, got him precisely what he wanted.
He moved past Coco, just a touch closer than was necessary and, for a second, his attention was swayed by her rounded bottom. Then, as quickly as he’d been distracted, his focus returned to Jessie, and he asked again, ‘You coming?’
Despite her common sense, despite so many things, Jessie nodded. She told Chris to wait for her outside for the last few minutes of her shift, all the time wondering if the other waitresses were still ogling him behind her back. Fear gripped her. Why pretend to be my friends if they’re going to have eyes on stalks every time he walks in?
As always, Coco totally ignored Chris, engrossed as she was with sorting out the bill for another one of her couples. ‘So what’s it going to be, guys, 50/50?’
A quick check told Jessie that, yes, the other two were still looking. She hated this jealousy. With bile in her throat, she wondered again why she allowed him to control her feelings this way. Coco was right, she was such a mug to keep letting this happen.

Sue Shepherd writes contemporary romance and enjoys creating novels with heart, laughs and naughtiness. She doesn’t pull any punches when choosing her subjects, but manages to handle her characters’ challenging situations with sensitivity and humour. Her debut novel, Doesn’t Everyone Have a Secret? was published by Corazon Books in March 2015. It reached the top 10 UK Kindle chart, and also topped the romantic comedy, contemporary romance and humour charts. It became available in paperback on Amazon in November 2015.

Sue’s second novel, Love Them and Leave Them, was published in September 2016.

Sue lives on the picturesque Isle of Wight with her husband, two sons and a standard poodle. Her passions in life are: her family, writing, the sea-side and all the beautiful purple things her sons have bought her over the years. Ask Sue to plan too far in advance and you’ll give her the heebie-jeebies and she’d prefer you not to mention Christmas until at least November!