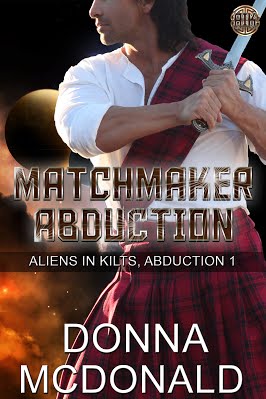 True love is said to defy time, but can it survive space, aliens, and being abducted? Angus MacNamara and Erin O’Shea are about to find out.

The big blue planet that most call  Earth desperately needs matchmakers. There is only one small—okay, BIG—problem. No one wants the alien dating service job. No one. The original matchmakers are dead, and much worse, their DNA is no longer viable for cloning.

Solution? Go back in time to some of Earth’s other—thankfully slower spinning—versions, and retrieve the alternates of the one couple in any universe who seems able to do the job.

Far easier said than done though, especially when the alternates are anything but a loving couple, and both are none too pleased to be thrown into the future.

What does oil and water create? Salad dressing or a real mess of aliens, humans, and matchmaking fun!

Donna McDonald published her first romance novel in March of 2011.

Forty plus novels later, she admits to living her own happily ever after as a full time author. Her work spans several genres, such as contemporary romance, paranormal, and science fiction. Humor is the most common element across all her writing. Addicted to making readers laugh, she includes a good dose of romantic comedy in every book.