Even when someone is cloaked by a charming smile and friendly nature, Ivy Nash knows the scent of a predator. Half of her life has been filled with one horrific event after another. Which is why she started ECHO, dedicating her life to rid the world of those who prey on children.

But despite all of her life experiences, nothing can prepare her for the “fun house.” A terror unlike any other. And that’s when she must decide if clinging to life is worth the hell that she will pay.

“An intense and heart wrenching story that keeps you engaged from beginning to end.”
— Simon Wood, USA TODAY Bestselling Author of DECEPTIVE PRACTICES.

Books in the Alex Troutt Thriller Series:
AT Bay AT Large
AT Once
AT Dawn
AT Dusk
AT Last

Books in the Ivy Nash Thriller Series:
IN Defiance
IN Pursuit
IN Doubt
Break IN

Coming soon….
IN Control
IN The End

A veteran of the corporate wars, former journalist, and true studier of human and social behavior, John W. Mefford has been writing his debut novel since he first entered the work force twenty-five years ago, although he never put words on paper until 2009.

A member of International Thriller Writers, John writes novels full of intrigue, suspense, and titillating thrills. They also evoke an emotional connection to the characters.

I honestly do not know how Ivy can go through everything she has gone through up to this point and still be such a strong woman, after the funk that Milton put her into in the last book she comes back fighting fit in Break IN, but this book is definitely not an easy ride for her.

She takes on a case involving 4 foster brothers and their grandpa William – when one boy is abducted she manages to find him, but when a second boy from the same family also goes missing cogs start to turn in her head as to why this family is being targeted, Christina is also on a job that unknown to her connects her and Ivy’s cases together.

Throw into the mix a reclusive millionaire and his “fun house” and you have a recipe for Ivy to go through hell yet again. This was one roller coaster ride of a story from the get go of the bloody scene to the intense feelings you will experience along with Ivy in the fun house. Mefford has done it again with another top notch story, but please I don’t know how much torture poor Ivy can take! 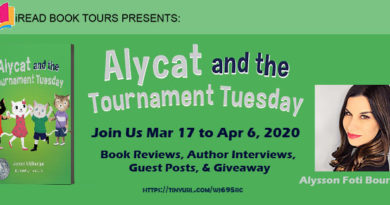 #Review Alycat and the Tournament Tuesday by Alysson Foti Bourque