Checkmate is the fourth standalone novel in the Harry Starke series of mysteries.

Angela Hartwell lay dead in the shallow waters beside the golf course. There was not a mark on her, yet she had been strangled. How could that be?

Once again, it’s up to Harry Starke to find out. The investigation takes him into a world he’s very familiar with, a world of affluence, privilege, and corruption.

To solve the mystery, he must deal with three murders, a beautiful used car dealer, her lovely twin sisters, and a crooked banker. Not to mention Burke and Hare, two crazy repo men who will stop at nothing to protect their employer’s interests. There’s also the matter of an ingenious, sadistic killer. But nothing is ever quite what it seems….

Harry Starke is a hard-boiled private detective, an ex-cop, a tough guy from the right side of the tracks with finely tuned senses, good instincts, and friends in high places. He’s single, successful, well educated, and yes, he will hurt you if he needs to.

This is my first encounter with Harry Starke and although it can be read as a stand alone I found that it would be beneficial to me have read the previous books to get a better feel for Harry.

Having said that this was one of those stories that sucked me in. When Angela Hartwell’s body is discovered during a round of golf, with not a single mark on her body at all, Harry ends up getting involved with solving the murder along side Kate who is a detective and also his girl fiends – or maybe love interest is want of a better word.

This is a good mystery that is full of twists and turns and kept me interested throughout. It will not be my last time reading a Harry Starke novel and I look forward to seeing what is in store for him next.

Blair Howard is from a small town in England, near Stratford-upon-Avon, on the edge of the English Cotswolds. He is Kentucky Colonel, an honor bestowed upon him in 2008 by the then Governor of the Commonwealth of Kentucky, Steven L. Beshear. Until 2015, he wrote sweeping historical epics, and is the author of five historical novels. In July of 2015 he decided to try his hand at writing mystery novels, thus we have Harry Starke. The first in the series, Harry Starke, was released in mid-September 2015. The second novel, Two for the Money, was released October 19 the same year, Hill House, in mid-December 2015, and Checkmate in February 2016, and there are more to come.

Blair is the author of more than 40 books and more than 4,500 magazine, newspaper, and web articles. His work has appeared in many national and international publications, including Delta’s Sky Magazine, PHOTOgraphic magazine, The Mail on Sunday, The Walking Magazine, Petersen’s Hunting Magazine, The Boston Herald, The Detroit Free-Press, The Anchorage Times and many more. 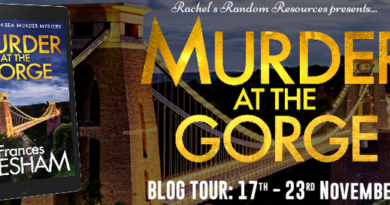 #Reveiw Murder at the Gorge by Frances Evesham