About from Beer to Eternity

A whip smart librarian’s fresh start comes with a tart twist in this perfect cocktail of murder and mystery—with a romance chaser.

With Chicago winters in the rearview mirror, Chloe Jackson is making good on a promise: help her late friend’s grandmother run the Sea Glass Saloon in the Florida Panhandle. To Chloe’s surprise, feisty Vivi Slidell isn’t the frail retiree Chloe expects. Nor is Emerald Cove. It’s less a sleepy fishing village than a panhandle hotspot overrun with land developers and tourists. But it’s a Sea Glass regular who’s mysteriously crossed the cranky Vivi. When their bitter argument comes to a head and he’s found dead behind the bar, guess who’s the number one suspect?

In trying to clear Vivi’s name, Chloe discovers the old woman isn’t the only one in Emerald Cove with secrets. Under the laidback attitude, sparkling white beaches, and small town ways something terrible is brewing. And the sure way a killer can keep those secrets bottled up is to finish off one murder with a double shot: aimed at Chloe and Vivi.

From Beer to Eternity see’s Chloe Jackson move from her home in Chicago to small town Emerald Cove in Florida following a promise she made to her best friend Boone – he made her promise to look after his grandmother should anything happen to him whilst in Afghanistan.

Following the memorial for Boone Chloe comes up with some flimsy excuse to stay around and ends up getting a job at the Sea Glass Saloon to be close to Vivi. I had a bit of a problem with the excuse she gave to people for sticking around, whilst it may be believable for a few days it certainly wouldn’t have been one to stick to for much longer, and Vivi seemed to have a instant dislike towards Chloe from the get go for some reason, which I also couldn’t figure out – surely having someone who was so close to you dead grandson would be an blessing to have around?

Anyway apart from those two little irks (which got smoothed out as the book went on) I really enjoyed this story, filled with realistic characters, a wonderful setting with a side of shady dealings and murder!

In her spare time, Sherry loves reading and is a patent-holding inventor. Sherry, her husband, and guard dog Lily are living in northern Virginia until they figure out where they want to move to next. 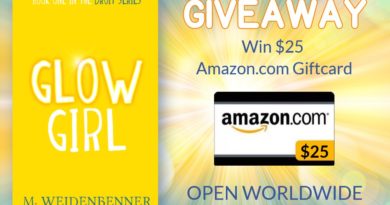