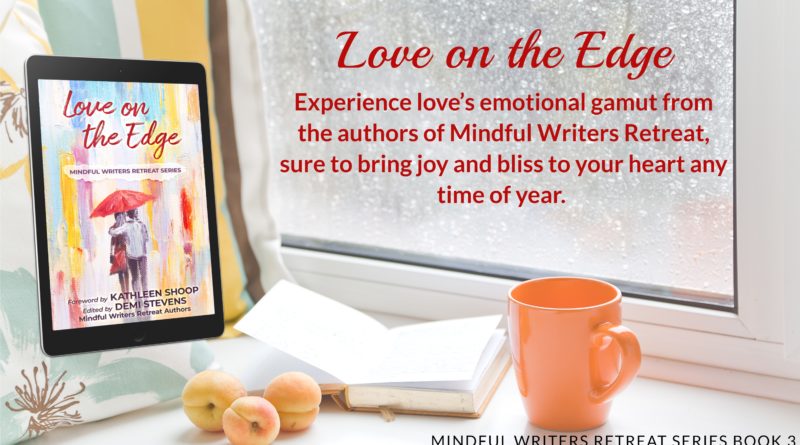 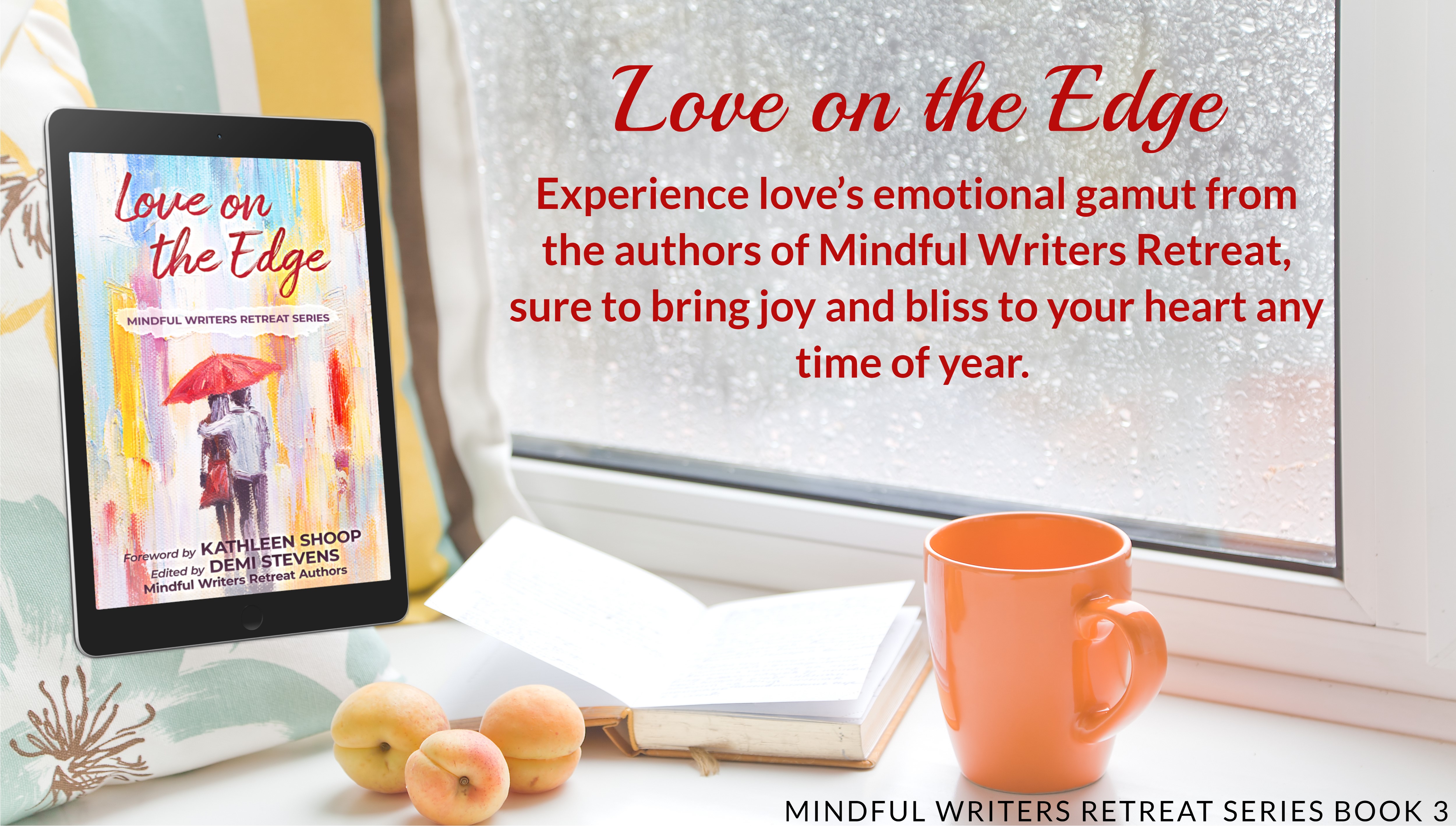 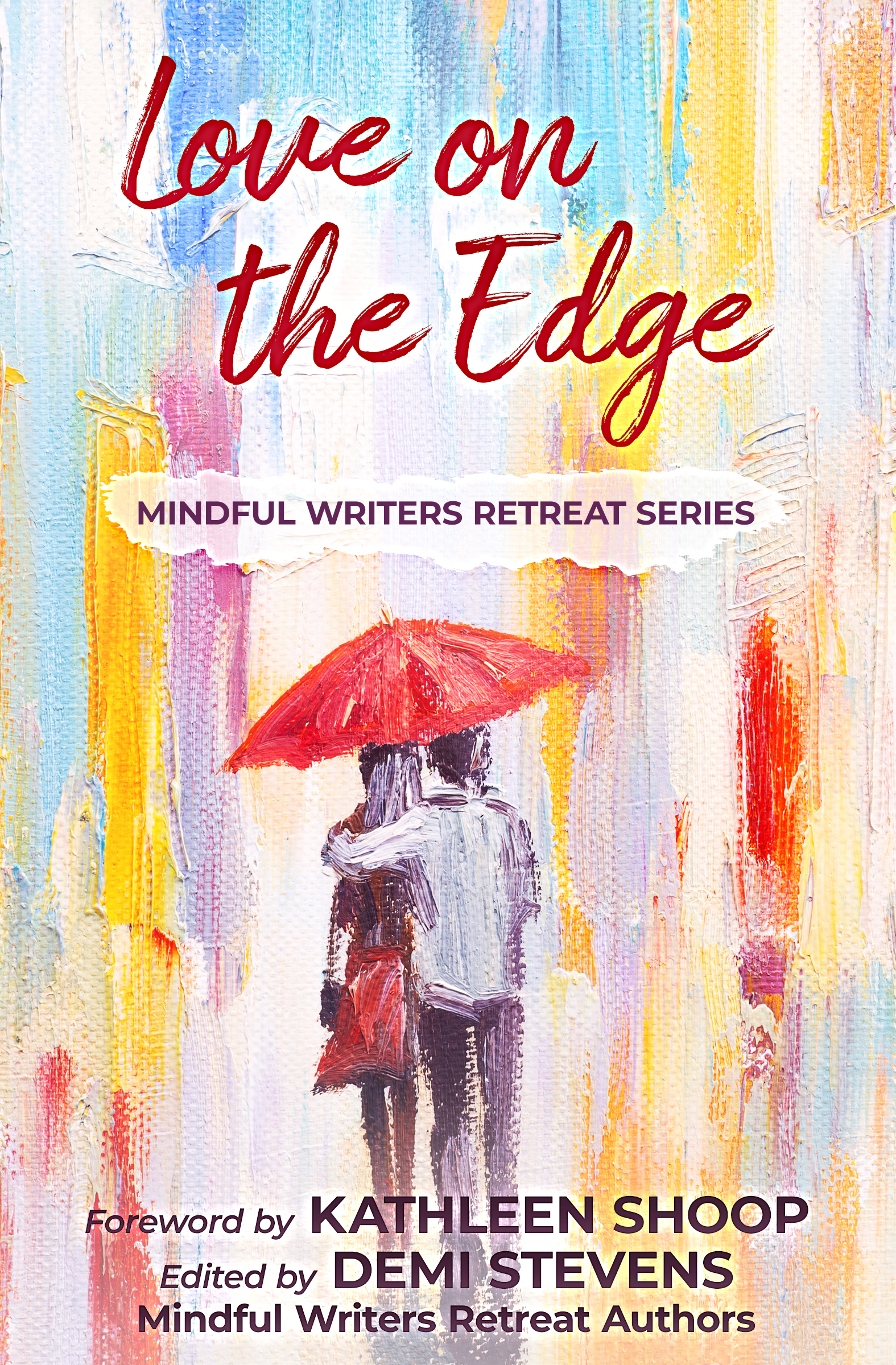 Experience love’s emotional gamut from the authors of Mindful Writers Retreat, sure to bring joy and bliss to your heart any time of year.

From love in the time of war… to love at first sight and long walks in the snow… to sparks flying because of nosy neighbors… Love on the Edge reveals the essence and evolution of the human need for relationship, written in a time when we’re all searching for deeper meaning and connection.

From the authors who brought us ‘Into the Woods’ & ‘Over the River and Through the Woods’ we are treated to a new delightful little collection of short stories, poems and essays pertaining to love.
I enjoyed reading this collection, and reading each of the authors unique take on the theme of love – I cant say that there any didn’t enjoy or any that i loved more than other, I just found this collection to be a nice pace, dipping into the stories here and there. I love the Mindful Writers series, and I love reading the content page to see what title jumps out to read first.
Another great collection from Mindful Writers Retreat and I can wait to see what they will produce next.

nce upon a time a guy sat in a bar. Stood up, mortified, unmoored. Finn Corbett’s perfect life had been balled up and tossed into the garbage like a plane spiraled out of the sky when its engine gave out. He sighed then downed the rest of his Iron City Light, glancing around the Three Rivers Tavern. Had anyone noticed the fat bouquet of ranunculus sitting beside him like it was his Valentine date? He’d gone to three florists on his postal route to find the right combination of every shade of pink and red colors that ValentineDreamer2 had said would melt her heart.

Turns out she was heartless, leaving a guy to stew in his ranunculus juices after sounding so excited to meet him. He checked his watch. Over an hour late. The lights dimmed, the dancefloor filled, and the band cranked out its first moody love song. Time to escape. He slid a twenty for a $4.50 beer under the bottle and stuffed the bouquet into his mail bag. Slipping out of the booth, trying to stay as small as possible, he jiggled the table, knocking the bottle off. A waitress breezed past, scooping it up just before it hit the floor. She set it on the table and bent down. “Um, your flowers.” She straightened bearing a couple of stems.

Pulling up to his full six feet four height, his hairline pricked with sweat.

“They tumbled out of your bag there… oh…” she brushed the blooms with her fingertips. “Like velvet. Ranunculus. A lucky la-dy…” her voice trailed off when she looked back at the table and realized there was no lady. She shoved them toward him. “They’re beautiful.”

Her face brightened, but before she said more, a customer called her away. Finn pulled his bag-strap over his shoulder and balked, the shocking pain reminding him he’d never get back on the pitcher’s mound if he didn’t baby it a little. Switching the bag to his other shoulder he limped, dismayed. He stopped and lifted his foot. What had he done to it? The leap over the fence when the Rottweiler chased him? The slip off the wet curb when the downpour kept Mrs. Renfrew on her porch with a letter she’d forgotten to add to the box?

He shook his head. Five months since he’d been released by the minor-league baseball team, Altoona Curve. There was only one way back to making his dream come true and that was to be fully healthy. Turns out, being cut from Double-A ball, having no savings or health insurance, made that harder to do than most would expect. But then his luck shifted, just a little tiny bit, like the sun splitting through dark clouds and an ump saying “Play ball,” he found the job as a postal carrier in Pittsburgh.

It had been perfect. His route kept him moving, he had the energy to work out and do physical therapy in the evening and the job paid that bill. All seemed to be going in the right direction until that night there in the tavern when his aloneness sat heavy as a just-filled mailbag. Weaving through dancing couples toward the exit, he considered that he’d never been stood up before, not once in his entire life. Perhaps he should have added the fact he had been (and soon would be again, he just knew it) a professional baseball player to his profile, and ValentineDreamer2 would be nesting the ranunculus in her arms that very moment.

But then he’d have to explain the whole system, why he wasn’t playing right then. It was true, very few people understood the competition in Double-A ball was often better than Triple-A… oh, there he went again. How often did he talk about baseball? Maybe ValentineDreamer2 could sense it through the internet, his self-centeredness sucking away all the energy in the room. Wasn’t that what Sarah had always said to him? Yep. He shook his head as he wove through the Valentine lovers, arms looped around necks, as bodies melded on the dance floor. Perhaps his loneliness had settled in long before he admitted it that night. Perhaps he was getting just what he deserved.

ngelica’s veins oozed of envy and spite. The sap coursed around her, bleeding down to her last veinlet. The unwanted jealousy was uncontrollable – and it was all Rosemary’s fault!

Before Rosemary’s herbaceous arrival, Edelweiss hovered over Angelica, showering her with loving dew-drops in the morning and glistening winks of his filaments at sunset. He hung high overhead from the rock wall’s crag, anchoring his roots deep into the gritty crevices.

Angelica lived amongst the wildflowers in the field below. She was grateful that she stood a solid foot above the others and closest to Edelweiss’s reach. He was her Noble White Matterhorn and she was his Chartreuse Elixir.

Angelica swooned remembering the days when she would splay her umbels wide and flash her snowy starburst to get Edelweiss’s attention. She wished that his silvery-white leaves would reach down to protect her from the sun and his hairy bracts caress her. Now, looking lovingly up at Edelweiss, all she could see was Rosemary’s orangish underside.

A tender perennial, Rosemary sat in her terracotta throne with the other potted plants: happy-go-lucky pansies, delicately drooping fuchsia, and sweet alyssum. Her handcrafted earthenware accentuated the oversized wrought iron stand that was strategically placed against the rock wall – blocking Angelica’s view of Edelweiss. The entitled plants luxuriated in a three-tiered towering complex, soaking up the organic tilth. From dawn of day until dark of night Rosemary flaunted her soft summer-blue flowers and petite sapid needles. She could almost, but not quite, touch Edelweiss. He shortened the gap, stretching his fuzzy filaments in her direction.

Angelica, on the other hand, was down with the dirt-trodden muck, disrespectfully grouped with the weeds. Her blistering sap was bubbling over! She could not allow Rosemary to connect with her true love. Born and bred on the wild side, Angelica had strong invasive and irritating qualities. But even with all of that going for her, she couldn’t tackle this devious task alone. Angelica called upon the queen of poisons, Aconite. Together they would formulate a lethal toxin to take out Rosemary and win back the unpided attention of Edelweiss. Aconite, the root of all evil, was devilishly up for an herbicidal attack.

Meanwhile, the unsuspecting Rosemary enjoyed being pruned and pampered and praised.

You spread freshness of swaddled joy in my lap.

Delight rises from the bottom of my belly, my heart, my head.

I am showered with bliss.

“Do you know who I am?” I ask, smiling from ear to ear. You simply stare.

you lay in your bassinet under moonbeams.

When you cry, adoring parents wrap you in a cocoon.

Kisses on your forehead, on your cheeks, on your tummy

leave a sweetness in me lingering like a lullaby.

My cradle song puts me to sleep to treasure the day in my dreams. 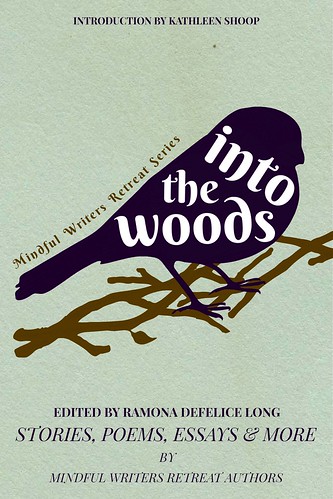 Into the Woods is the title and theme for this assortment of short stories, poems, essays, music, and one walking meditation. Each piece is unique in tone and genre and the result is that the collection captures the fascinating, frightening, fun, healing, and fantastical wonder of time spent in the woods. The twenty-six contributors who attend Mindful Writers Retreats in the mountains of Ligonier, Pennsylvania, are donating one hundred percent of the proceeds to support the research and work of The Children’s Heart Foundation. 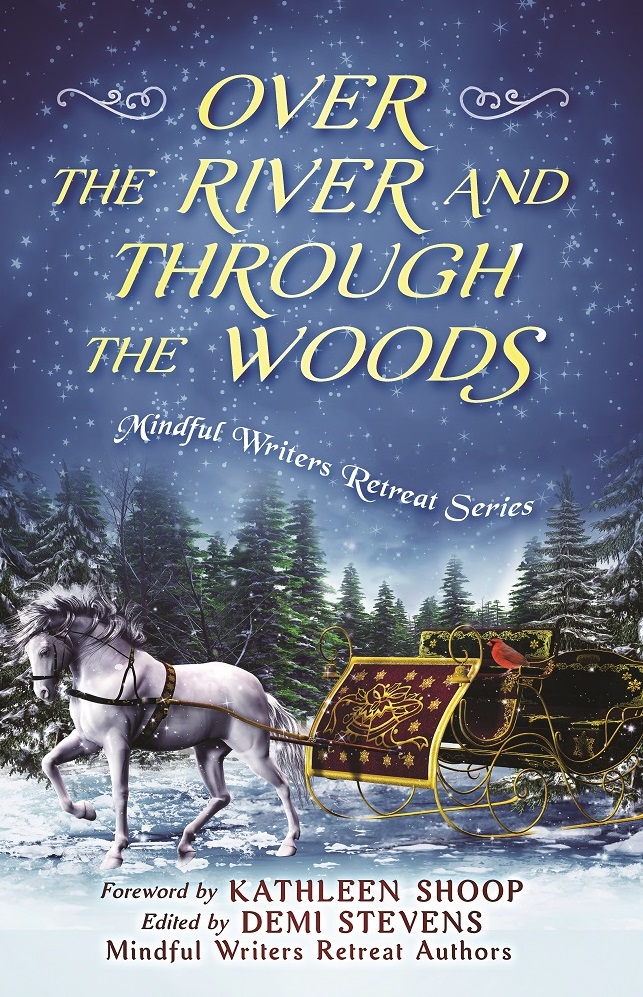 A holiday pastiche from the authors of Mindful Writers Retreat, sure to light your festive candles!

From a Thanksgiving snow storm that mends old feuds… to the family misunderstandings that fuel new ones… a quirky elf and some romantic stardust will get you ready to go Over the River and Through the Woods on a journey through time! 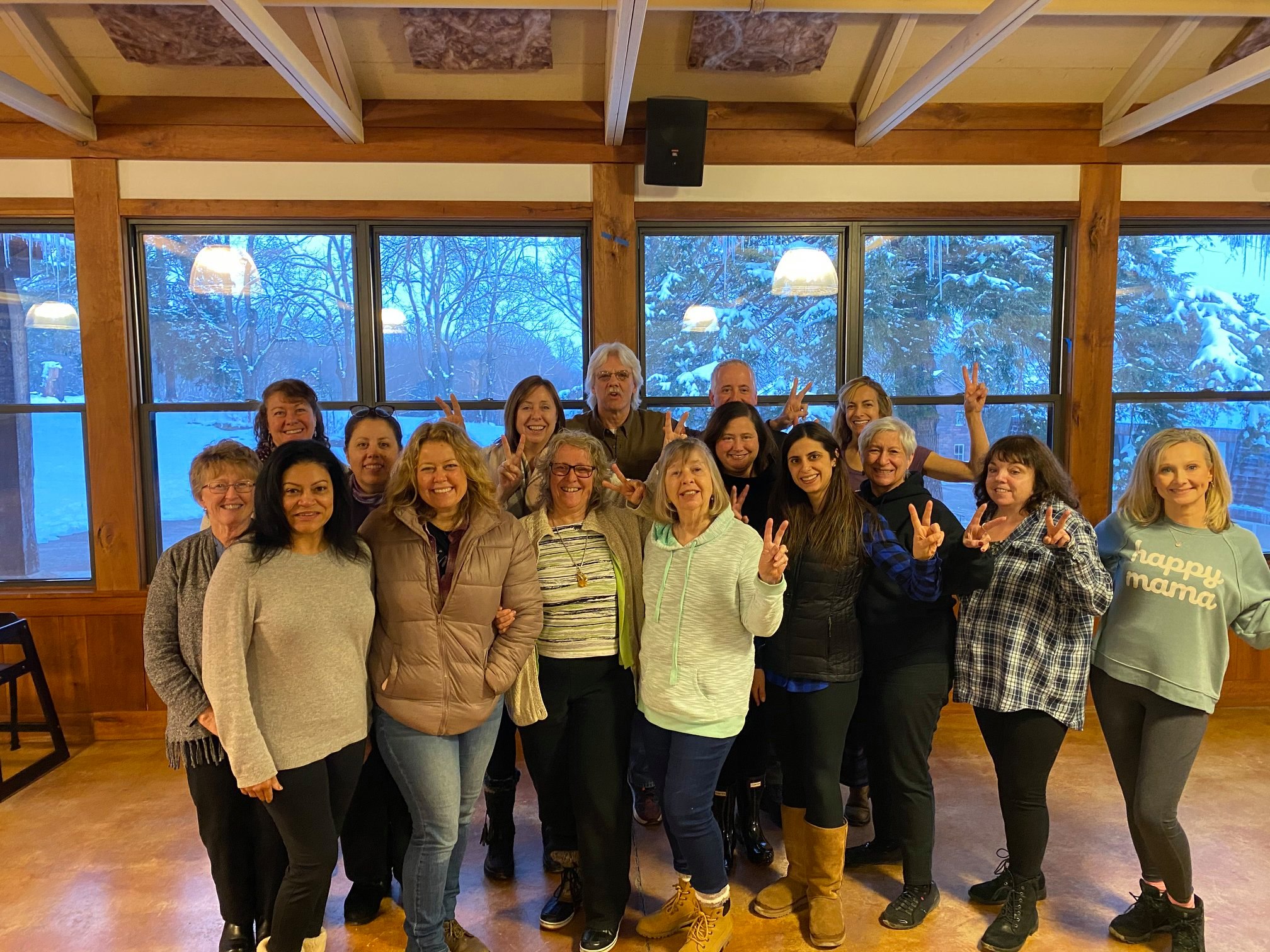 The Mindful Writers retreat together several times a year in the beautiful Laurel Highlands of Pennsylvania. While there, they write books and come up with some wonderful stories. They share these in their anthologies. 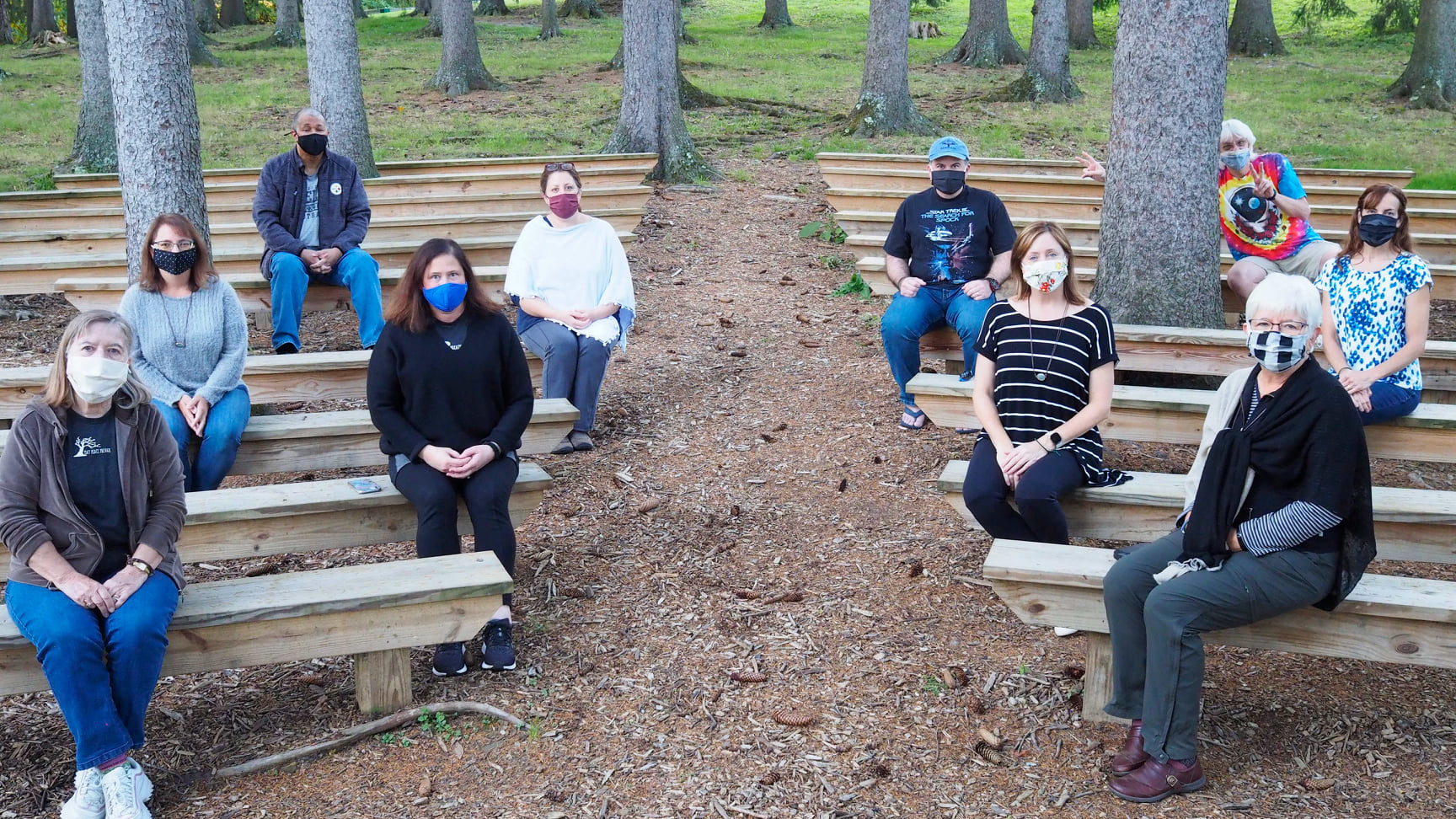 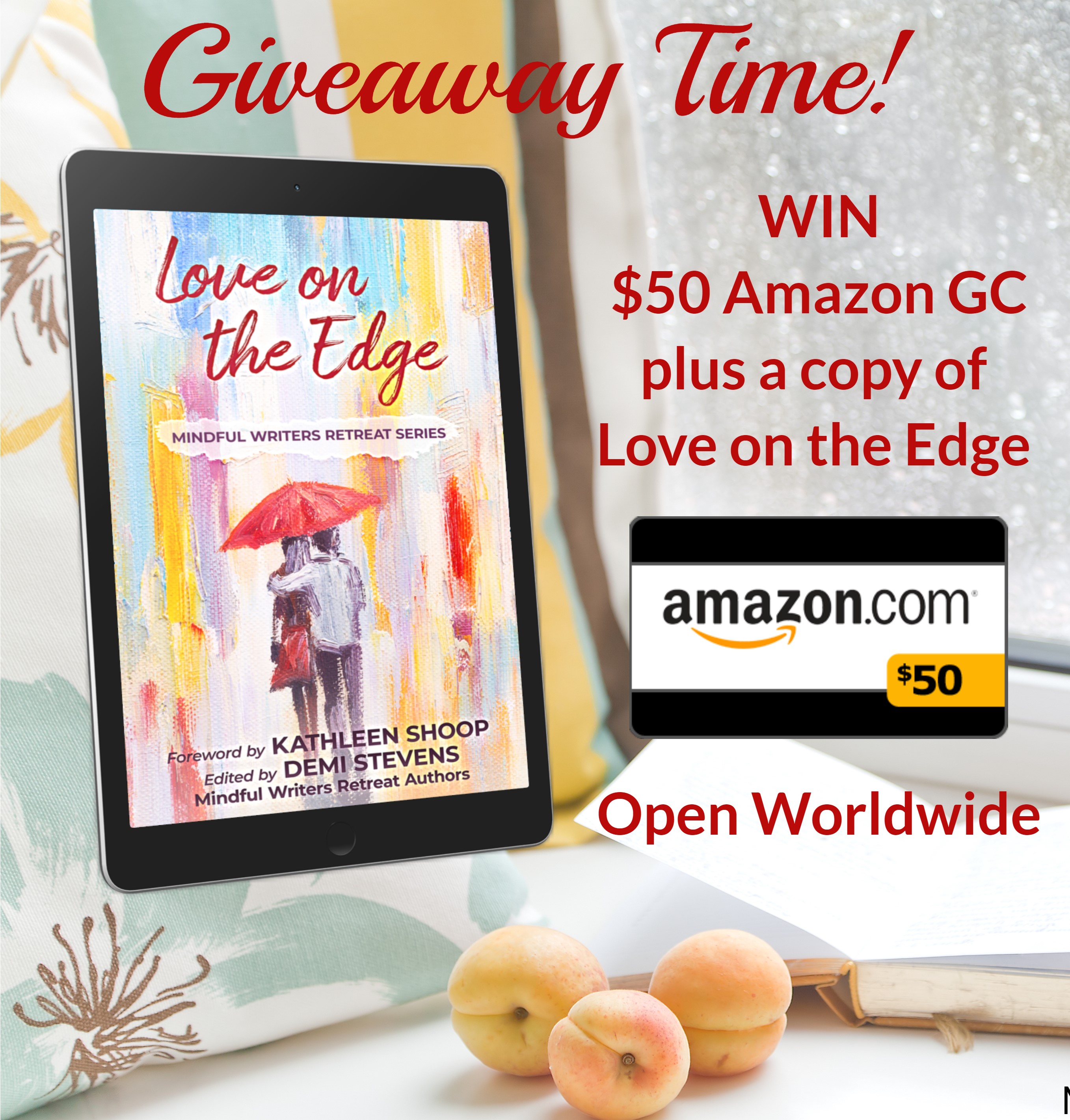 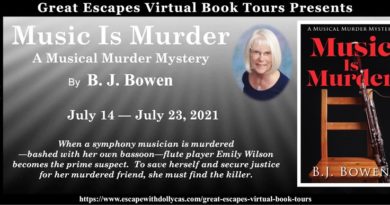 [Blog Tour] The Secret and the Butterfly by Rosemary Ness Bitner