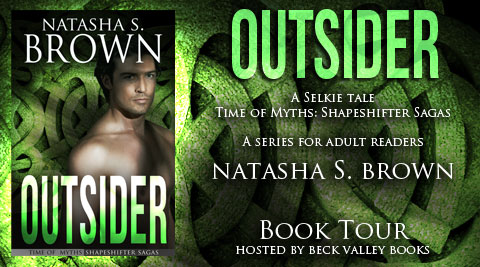 On the western highlands of Scotland, a springtime storm pummels the coast while Kristie’s brother is out fishing. When he fails to return home, Kristie turns away from her list of chores to search the loch in an effort to ease her pregnant sister-in-law’s fears. Instead of finding Domnall, she discovers a naked and battered man washed up on shore and worries he could be a thieving reiver or worse–an Englishman.

When the handsome outsider wakes, he is unable to remember who he is or how he came to be there. Although the feisty and melancholy Kristie isn’t keen on him remaining, her young neighbor, Jock, takes to the playful stranger and names Creag after the rocky crags where the loch meets the sea. Not long after the lad speaks of selkies, magical seals who shed their skins to live as humans, Creag dreams he is swimming deep beneath the waves.

Kristie is desperate to keep the farm running for her missing brother while Creag’s sleep is filled with strange visions–glimpses that may reveal secrets to his past, but he may soon wish they were only a dream.

Lady Rayne has few options as a young widow. Either her father will marry her off to a wealthy nobleman–no matter how old and disagreeable he may be, or she will become a nun like her aunt at Grimsford Abbey. The choice is easy: her interest in writing is not supported in the dark halls of her father’s home. Rayne eagerly anticipates becoming a scribe and learning the art of illumination and book making. But first she must travel along the treacherous roads of East Anglia.

Far from the confines of Norwich, Rayne hears fables of an enormous ghostly hound called the Black Shuck. She tries to ignore them until she finds herself staring into its expressive brown eyes. With every heartbeat, her chances of reaching Grimsford Abbey disappear. If only she could live to tell the tale.

It’s Leif’s eighth summer going viking with his father on their ship the Kraken—and he’s had enough. For as long as Leif can remember, his father has claimed to be a descendant of Ægir, god of the sea, and has exploited their shape changing ability—all this to amass enough gold to gain entrance into the ocean god’s halls. Leif hopes that time’s drawing near so he can free himself from Ragna’s domineering shadow.

On the green hills of Éire, Eilish is content learning traditional folk cures from her father until a Finn-Gall raid disturbs the peace. Desperate to protect Eilish from harm, her father cuts her hair and disguises her in his old clothing before she’s ripped from the only home she’s ever known. Sold as a thrall in Duiblinn, she must hide out as a young man on a ship full of barbarians.

Now Eilish, who fears she’ll become Ægir’s next sacrifice, and Leif, who isn’t prepared to stand up against his father’s powerful wrath, must face the tides of change—no matter how ominous they may seem.

Ever since I picked up the first book in this series I have been desperate to read one of the many myths from Scotland and with Outsider, Natasha did not disappoint me one bit.

Set in the western highlands of Scotland, we meet Kristie, a woman by all accounts who has endured so much over the years that it has turned her heart to stone in a way. Her brother has gone off fishing leaving the woman -Kristie and her very pregnant sister-in-law Jean to tend to the croft, only when a bad storm hits and the men don’t return does Kristie go to the shores of the Loch in search for them. Only she found more than she bargained for. On the beach she finds a man, a very naked man!

Fearing the man could be a reiver or worse–an Englishman, Kristie is against tending to the man but she takes him to the croft and dumps him with the horse. When the very handsome and mysterious man wakes up he has no idea who is or where is from, and much to Kristie’s relieve he is most definitely not an Englishman!

Kristie neighbour Jock takes a liking to the man and names him Creag, the man also takes a liking to Jock and the two become friends whilst he is recovering in the barn. Jock is a story teller and once he tells Creag the tales of Selkies – seals who can shed their skin and live as men/woman on land, he begins to experience dreams and visions, ones that don’t make much sense to him as first but as his relationship with Kristie grows and trust is built between them, he feels the calling of the water.

Only once he goes to the water does he remember who & what he is, and how he came to be stranded on the beach. He is harbouring a terrible secret and fears that all he has built with Kristie will be lost.

Can Kristie break down her defences and let him after she learns his true identity and what he has done? You really need to pick up this book and the whole series, I promise you will not be disappointed!

This book has been my favourite of the series, not only because it is set in my homeland, but because yet again Natasha has done an amazing job at research in the Selkie Myths and Scotland.

For all this has a content warning, this is very much a clean shapshifter book compared to most others, which makes this a welcome change to this genre of books. 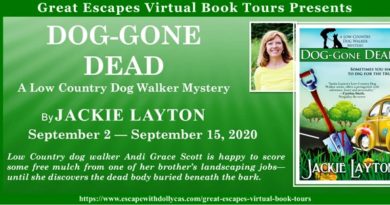