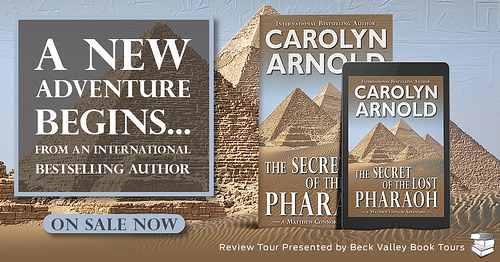 #review The Secret of the Lost Pharaoh by @Carolyn_Arnold #bvbtours #giveaway

Mystery lovers will need to hold on to their hats for this follow-up to City of Gold, which reviewers described as “a fast-paced action adventure” that is “akin to an Indiana Jones story set in modern times.” Now, the second in the series promises to bring much of the same excitement! Join archaeologist and adventurer Matthew Connor and his friends as they go after the Emerald Tablets to save the world in The Secret of the Lost Pharaoh.

In Egypt’s Western Desert lies the tomb of an unnamed pharaoh that hides a secret so powerful, it could destroy the world as we know it.

Archaeologist and adventurer Matthew Connor has made a career of finding legends the world has all but forgotten. Though there’s one in particular that has fascinated him for years—the Emerald Tablets. Myth says that they possess the knowledge of the universe, allowing humankind to traverse Heaven and Earth, and have the power to bestow wealth and wisdom upon whomever possesses them. But if they fall into evil hands, it could cause a global disaster.

So when a former colleague stumbles across an ancient Egyptian hieroglyphic map that promises to lead to a pharaoh’s tomb and the Emerald Tablets, there’s no way he’s turning down her invitation to join the dig. He only has one stipulation: his best friends Robyn Garcia and Cal Myers come with him.

The road ahead isn’t going to be an easy one, and their shared dream of recovering the Emerald Tablets is being crushed at every turn. And just when they think it’s all over, they learn there are a few clues they have overlooked. But they’re no longer the only ones searching for the Tablets. Now, the fate of the world hangs in the balance, and soon they’ll find out that when it comes to hunting legends, they can’t trust anyone.

Action-adventure books for the mystery lover.
Does treasure hunting excite you?
What about the thought of traveling the globe and exploring remote regions to uncover legends that the world has all but forgotten? If so, strap yourself in for an adventure with modern-day archaeologist Matthew Connor and his two closest friends. Indiana Jones meets the twenty-first century.


This is the perfect book series for fans of Indiana Jones, Lara Croft, National Treasure, and The Relic Hunter.

Each book may be read as a stand-alone novel, or as part of the series.

Finding the Inca’s lost City of Gold would be the discovery of a lifetime. But failing could mean her death…


Archaeologist Matthew Connor and his friends Cal and Robyn are finally home after a dangerous retrieval expedition in India. While they succeeded in obtaining the priceless Pandu artifact they sought, it almost cost them their lives. Still, Matthew is ready for the next adventure. Yet when new intel surfaces indicating the possible location of the legendary City of Gold, Matthew is hesitant to embark on the quest.


Not only is the evidence questionable but it means looking for the lost city of Paititi far away from where other explorers have concentrated their efforts. As appealing as making the discovery would be, it’s just too risky. But when Cal’s girlfriend, Sophie, is abducted by Matthew’s old nemesis who is dead-set on acquiring the Pandu statue, Matthew may be forced into action. Saving Sophie’s life means either breaking into the Royal Ontario Museum to steal the relic or offering up something no one in his or her right mind can refuse–the City of Gold.


Now Matthew and his two closest friends have to find a city and a treasure that have been lost for centuries. And they only have seven days to do it. As they race against the clock, they quickly discover that the streets they seek aren’t actually paved with gold, but with blood.

CAROLYN ARNOLD is an international best-selling and award-winning author, as well as a speaker, teacher, and inspirational mentor. She has four continuing fiction series—Detective Madison Knight, Brandon Fisher FBI, McKinley Mysteries, and Matthew Connor Adventures—and has written nearly thirty books. Her genre persity offers her readers everything from cozy to hard-boiled mysteries, and thrillers to action adventures.

Settle into your favorite reading chair because 6 FREE e-books are waiting for you! Sign up today and access to your first book will be coming to your inbox in less than a minute!

If you enjoyed City of Gold then you are going absolutely love The Secret of the Lost Pharaoh.

Matthew Connor is back in a new action packed, edge of your seat, treasure hunting mystery. I delved right into this book and I couldn’t put it down, I have always loved Egyptian History and it is clear that Arnold has done her homework on it as well as she really made you feel like you were right there with Matthew and Co as they help out on a archaeological dig of a lifetime.

The fabled Emerald Tablets and the tomb of an unknown Pharaoh sees the dig site leader Alex get in touch with Matthew to convince him to come and join her team, Matthew has long been fascinated by the prospect of finding the Emerald Tables that he needs no persuasion and wrangles Cal and Robyn along for the ride – though they are both still recovering from there brush with death in the previous book – what could go wrong in this one right?

Once in Egypt they meet the others on the dig team and get to work, though there are members that will you dislike and feel they are up to something but you get so wrapped up in the danger and adventure that awaits them in the tomb that you forget why you dislike then until all hell breaks loose!

This really is an action packed adventure that will make you feel you are right in the midst of the the discoveries they make and the danger they get into. I was slightly miffed at the ending, not how it ended more Matthews decision on something (don’t want to spoil it) I can see why he chose to do what he did but still, to actually go through what they did they had to protect the world somehow…

Dont miss the chance to read this fantastic series from Carolyn Arnold.