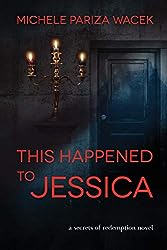 How many more are going to die because you refuse to remember?

Becca would like nothing better than to put the past behind her and focus on making Redemption her home. But what do you do when the past refuses to stay buried?

Becca still can’t remember the night sixteen-year-old Jessica disappeared from a party, never to be seen again. Which is bad enough (especially since she was supposedly the last person to see Jessica alive), but it’s not the worst …

Strange events are making Becca think there’s a link between what happened to Jessica fifteen years ago and the darkness happening now.

With help from her friends and her teenage crush, Daniel, Becca races against time to uncover the truth about Jessica before another sixteen-year-old girl is doomed to the same fate as Jessica …

Only Available on Amazon and FREE in Kindle Unlimited!

**You must read the first book in this series! This is not a stand alone.**

Once again I was hooked by this book, after finishing book 1 I immediately started this one and I could not put it down. They mystery surround Jessica’s disappearance and Becca’s memories slowly returning keep me reading in the wee small hours of the night!

After the chaos that ensued towards the end of book 1, Becca is home, her husband is in jail and her stepdaughter Chrissie is in foster care. Yeah you REALLY need to read the first book!

Now Becca frustrated me a little in this book (she did in the first but more so in this one) I really wanted to smack her upside her head and say ‘get it together!’ she seemed to be in a fog after everything that happened, ok I feel for her I probably would to. But now that she is still dreaming of Aunt Charlie and knowing now that she is there to help Becca remember what happened that night that Jessica disappeared, Becca seems to just drag on the clues that Charlie is dropping. As frustrated as I was with Becca I could see her point in her own frustrations with Charlie – who just gave her riddles instead of straight up telling her, though I understand why Charlie could’t as well. Urgh see its frustrating!

I had an idea what happened that night to Jessica, and in this book we do get to the bottom of it, but honestly looking back the “Who” surprised me, but now it made sense, but once we get to the bottom of that mystery there is another wrapped up in it as well that leads us to book three in the series.

With missing pets, peeping toms and a missing girl – it would appear that history is repeating itself, but will Becca remember “the evil that was done” or will she continue to block out the past?

Michele PW has done it again with keeping me up into the early hours, and once again had me on the edge of my seat to the very end.

When Michele was 3 years old, she taught herself to read because she wanted to write stories so badly.

As you can imagine, writing has been a driving passion throughout her life. She became a professional copywriter (which is writing promotional materials for businesses), which led to her founding a copywriting and marketing company that serves clients all over the world.

Along with being a copywriter, she is also a bestselling, award-winning fiction and nonfiction author.

For fiction, she writes psychological thriller/mystery/romantic suspense novels. She also hosts a popular book and entertainment blog. Check out MPWNovels.com for more.

For nonfiction, she’s the main author and creator of the “Love-Based Business” series that include both business and personal development books. For articles and resources on business, writing, success and more, visit LoveBasedBiz.com.

She holds a double major in English and Communications from the University of Wisconsin-Madison. Currently she lives in the mountains of Prescott, Arizona with her husband Paul and southern squirrel hunter Cassie.