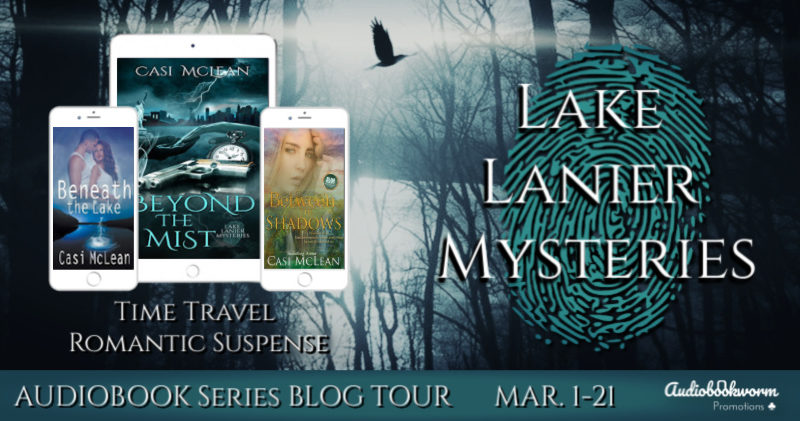 #OnTour with #AudioBookWormPR
Beneath the Shadows by Casi McLean
#TimeTravel

She never expected to confront deadly villains…let alone fall in love with one….

After her friend York encounters the ghostly image of a young woman, Mackenzie Reynolds seizes the opportunity to initiate a time jump, thrusting them back to 1865 Georgia. Resolved to thwart the girl’s untimely fate, Kenzi stumbles into a deadly conflict over a stockpile of stolen Confederate gold.

An injured Civil War survivor, James Adams, departs for home with a war-fatigued companion he’s determined to help. After pilfering a horse and kidnapping a woman, he never dreamed his hostage would steal his heart.

Kenzi and James must unravel a deadly plot while helping York save his ghost woman from a brutal death. But can she leave York in a violent past to save James’ life?

Casi’s powerful memoir, Wingless Butterfly: Healing The Broken Child Within, shares an inspirational message of courage, tenacity, and hope, and displays her unique ability to excel in nonfiction and self-help as well as fiction. Known for enchanting stories with magical description, McLean entices readers in nonfiction as well with fascinating hooks to hold them captive in storylines they can’t put down.

Her romance entwines strong, believable heroines with delicious hot heroes to tempt the deepest desires then fans the flames, sweeping readers into their innermost romantic fantasies. Ms. McLean weaves exceptional romantic mystery with suspenseful settings and lovable characters you’ll devour. You’ll see, hear, and feel the magical eeriness of one fateful night. You’ll swear her time travel could happen, be mystified by her other worldly images, and feel heat of romantic suspense, but most of all you’ll want more.

Kristin “KJ” James was born and raised in the Nashville, TN area. Acting has always been a passion of hers. Starting on the stage as early as preschool, KJ pursued her passion into college where she received a BA in Communication with a double emphasis in Theatre and Public Relations from Mississippi State University. After college she found herself more and more drawn to voice overs. Several classes, coaching sessions, seminars, research, and a closet-turned-studio later, and she now records and produces audiobooks on a regular basis. She has also done several radio commercials for clients such as Advance Financial, TriStar Health, and GAC.

When she’s not in her booth, you can find her crocheting, playing video games, or running agility with her dogs.

In this instalment York who arrived from the future at the end of book two, is finding his feet in the present day but when he stumbles upon a woman in trouble it is clear that she from the past, from the 1860s to be exact. She seems to be stuck in a time loop not able to leave the place where York found her, so he decides to travel back in time in order to help her.

There are a lot of moments where the effects of the past effect the future and by York going back to 1860 and getting stuck there when TESS malfunctions, it actually works out for the best in the future – it was a meant to be scenario.

I enjoyed this series, still cant get my head around the time travel things and how their actions would effect the future in the way it did.

I struggled at bit with Kristin’s male voices to being with, I think because each audio book was done by a different narrator, I was just getting used to them before the next book being done by someone else. That being said I really liked her voice and she did bring this story to life, switching seamlessly between characters and accents.

Over all a 4 star listen

I received this audiobook as part of my participation in a blog tour with Audiobookworm Promotions. The tour is being sponsored by Casi McLean. The gifting of this audiobook did not affect my opinion of it. 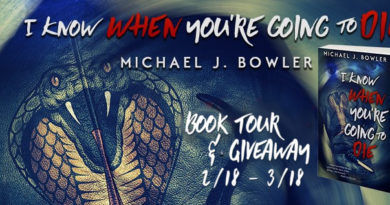 #Review I Know When You’re Going to Die by Michael J. Bowler