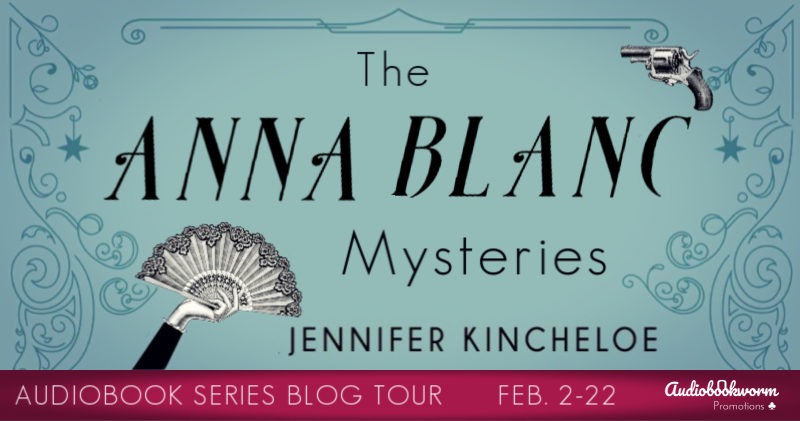 It’s 1907 Los Angeles. Mischievous socialite Anna Blanc is the kind of young woman who devours purloined crime novels, but must disguise them behind covers of more domestically-appropriate reading. She could match wits with Sherlock Holmes, but in her world women are not allowed to hunt criminals. Determined to break free of the era’s rigid social roles, Anna buys off the chaperone assigned by her domineering father and, using an alias, takes a job as a police matron with the Los Angeles Police Department. There she discovers a string of brothel murders, which the cops are unwilling to investigate. Seizing her one chance to solve a crime, she takes on the investigation herself. If the police find out, she’ll get fired; if her father finds out, he’ll disown her; and if her fiancé finds out, he’ll cancel the wedding. Midway into her investigation, the police chief’s son, Joe Singer, learns her true identity, and shortly thereafter she learns about blackmail. Anna must choose – either hunt the villain and risk losing her father, fiancé, and wealth, or abandon her dream and leave the killer on the loose.

Jennifer has been a block layer, a nurse’s aid, a fragrance model, and on the research faculty at UCLA, where she spent 11 years conducting studies to inform health policy. A native of Southern California, she now lives in Denver, Colorado with her husband and two teenagers. She’s currently writing book three in the Anna Blanc Mystery series. Book two, THE WOMAN IN THE CAMPHOR TRUNK, is coming out in Fall of 2017 from Seventh Street Books.

Moira grew up in teeny-tiny Rutland, England’s smallest county, which is fitting as she never managed to make it past five feet herself. Moira’s work spans the pantheon of the voiceover world: plays for BBC radio, plays for NPR, video games, commercials, television promos, podcasts, cartoons, movies and award winning audiobooks. She’s won Multiple Audie Awards, Earphone Awards, as well as Audible’s prestigious Book-of-the-Year Award. She has lately set foot in front of the camera again, appearing in “Pretty: the Series” and the Emmy-winning “Dirty Work.”

The Story:
Anna Blanc is a high society lady – though she is very much one to break the mould. She is quite a complex character, but one that grows on you as the story unfolds. Living in LA at the turn of the century it is a very different time for woman, and Anna would love nothing more than to be a detective, but she knows that will never happen yet somehow she ends up becoming a police matron for the Los Angeles Police Department.  And by doing that job she discovers a string of murders realting to borthel girls, that the police are seemingly brushing them off as suicide.

I loved the story and the trail that Anna follows to discover who is killing the girls – I had no idea who it was going to be, at one point I was sure the author was going to reveal it as someone I had come to love only to have a twist turn me in the other direction.

A great story and I can’t wait to see what is store for Anna Blanc next.

The Narration:
Moira Quirk was brilliant at bringing this story to life, her accents and male as well as female characters were flawless. She really brought the era and Anna’s character to life and the whole production was seamless and flawless.

I received this audiobook as part of my participation in a blog tour with Audiobookworm Promotions. The tour is being sponsored by Jennifer Kincheloe. The gifting of this audiobook did not affect my opinion of it.

#BlogTour Take Me To Bed