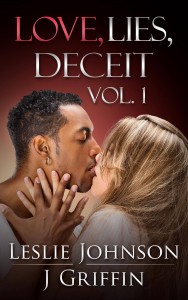 Janice Fisher’s childhood was what every little girl dreamed of—big house, lots of attention and rich parents who loved her. She’s a bit sheltered, maybe, but that’s okay. At least it’s okay until she starts college and ‘sheltered’ becomes overbearing and she’s forced into a career path they want.

Then she meets a boy… father approved… until said boy turns into someone she never expected. She’s worried and doesn’t know what to do.

Her classmate, Olympic swimming hopeful Deshawn Bell, tries to help her, even though her situation appears hopeless from every angle. He’s kind and sexy as hell. Their attraction to each other is intense. But neither of them are prepared for the hidden danger their relationship presents.

Find out what happens to Janice and Deshawn in the new adult thriller from Leslie Johnson. Love, Lies and Deceit is the first book of a series.

I enjoyed this book, and after reading the Ashes series by Leslie Johnson I could not wait to read this.

Janet fell short for me however, I expected her to be a must stronger person and I couldn’t actually believe she was was SO naive and gullible. But then without those characteristics, this story would have took a different turn,

Janet is a freshman in college and whilst out at a party she meets Tony – he is charming and has her attention but isn’t what is seems for him. They start dating and it is only when the equally handsome and charming Deshawn points out to her to exactly what Tony is all about that we realise just how very naive she really is.

When she realises just what Tony is all about, she calls it off. But this is where it all starts to go wrong for her and her blossoming relationship with Deshawn.

I was hooked and the end had me on the edge of my seat to pick up part 2! 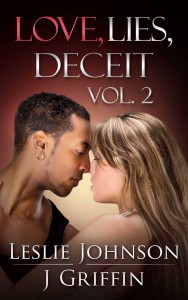 Janice thought she could handle her new assignment. Manipulating Tony’s confession should have been easy. A little kiss here, a flirty squeeze there. The plan was perfect. She’d get her life back and Tony would pay for his crimes.

Now she’s alone. Vulnerable. Afraid. Listening to talk of her and her lover’s demise. She doesn’t seem so smart now. In fact, she can’t believe she was so stupid to fall for a love covered in deceit and lies.

Part two of this romantic suspense has the two lovers fighting for their lives… and each other.

Wow! This one kicks off right where book 1 ended and I was hooked. This is more faster paced toward the end.

Janice has gone back to Tony, but not how you think, she has gone back to try and get a confession out of him only it doesn’t go a smooth as everyone would have hoped. Deshawn goes to rescue her and ends up getting caught up in the crossfire.

This book is packed with action and hold your breath moments and it was great to see Janice become a much stronger character than she was in book 1.

A great read and series.

Leslie is a California native but recently moved to Arizona after a stint in Arkansas. She enjoys travel and being with friends.

She is an avid reader of many genres, but prefers romances with travel or thriller themes. She loves writing about strong women and strong men because the world needs both!

Coming out from behind his desk as a ghostwriter and plot creator, J Griffin is now writing books under his own name and in partnership with other authors.

Sweet stories of love and loss. Betrayal. Seeing past prejudiced and limiting beliefs. A big dose of suspense is often called for. Most of all, stories for today. Not your grandmothers romance novels!