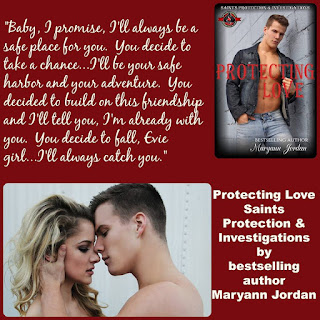 Patrick Cartright only had two more months in the Army
before returning to Virginia. A new job with the Saints Protection &
Investigations Agency awaited and offered a chance to be near family. Falling
in love, while still in California, was not his intention.
Evie Sinclair, raised an Army brat with more relocations under her belt than
she could remember, had no desire to move again. She was settled and planned on
staying that way. Falling for a soldier did not fit into her plans.
But as they investigated the theft of military equipment from Evie’s company to
Patrick’s base, they searched for the truth, while Evie tried to protect her
heart. When Evie is threatened, Patrick rushes to save her, vowing to protect
her at all costs.
Sacrifice Love 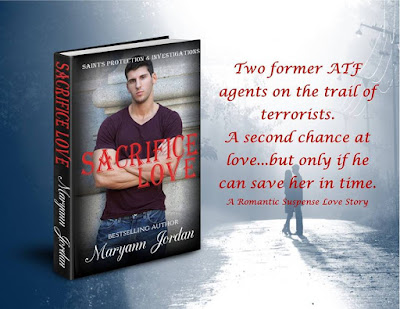 Saints Protection & Investigations
A private investigation business, pulling together men from the CIA, FBI, ATF,
DEA, Border Patrol, SEALS, and police, devoted to the missions no one else
wants or can solve.
Chad Fornelli was used to a life of sacrifice, as a former ATF ordnance
disposal expert. At the funeral of Adam, his friend and former ATF partner,
saying goodbye was not the hardest part of the day for Chad. It was seeing his
friend’s widow and remembering how he let the woman he loved two years earlier
get away.
Full of regrets over missed chances, he vowed to correct his past mistakes.
Dani Turner had watched the man she love walk away two years ago and now buried
her husband. Wondering if she and Chad had another chance together, she was
willing to see if they had a future. But…her little surprise might change
everything.
The investigation into the explosion that killed Adam had Chad racing against
the clock to stop an ISIS cell in Virginia from building more bombs. And
evidence pointed to his friend being involved with the terrorists.
Untangling the mystery, Dani was caught in the terrorist’s crosshairs as she
and Chad worked together to prove Adam’s innocence…and save her life.
Will they be able to live long enough to have their second chance?
*****Due to mature scenes of a sexual nature and language some may consider
crude, 18+ readers only!*****
This book is a standalone, written in the Saints Series. Be warned – alpha men,
strong women, suspenseful, and a sweet & steamy love story!

As an Amazon Best Selling Author, I have always
been an avid reader. I joke that I “cut my romance teeth” on the
historical romance books. In 2013 I started a blog to showcase wonderful
writers. In 2014, I finally gave in to the characters in my head pleading for
their story to be told. Thus, Emma’s Home was created.
My first novel, Emma’s Home became an Amazon Best
Seller in 3 categories within the first month of publishing. Its success was
followed by the rest of the Fairfield Series and then led into the Love’s
Series.  From there I have continued with the romantic suspense Alvarez
Security Series and now the Saints Protection & Investigation Series, all
bestsellers.
My books are filled with sweet romance and hot sex;
mystery, suspense, real life characters and situations. My heroes are alphas,
take charge men who love the strong, independent women they fall in love with.
I worked as a counselor in a high school and have
been involved in education for the past 30 years.  I recently retired and
now can spend more time devoted to my writing.
I have been married to a wonderfully patient man
for 34 years and have 2 adult, very supportive daughters.
When writing, my dog or one of my cats will usually
be found in my lap!
I love to hear from readers, so please email me! 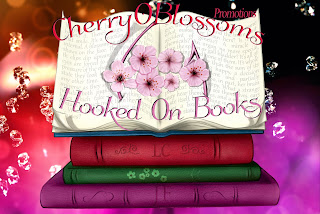 #BlogTour COURAGE OF ONE