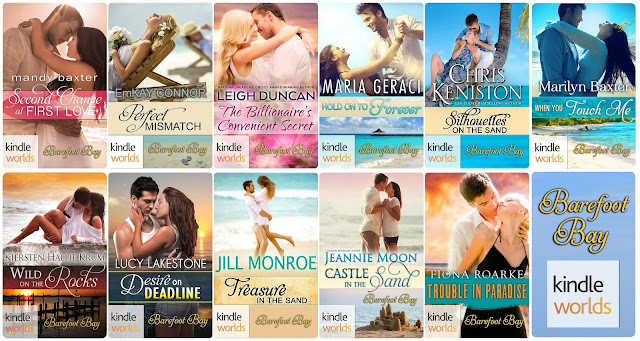 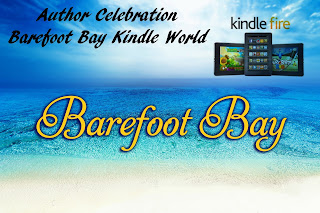 Silhouettes on the Sand
Chris Keniston 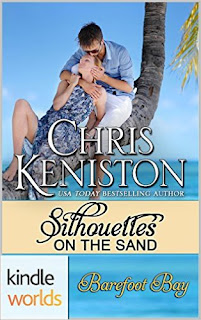 In Mimosa Key for his brother Naughty Nate’s wedding, Chase Ivory has a plan to avoid his eccentric grandfather’s matchmaking—hire someone to be his date for the week. A beautiful and ditzy actress with no strings, and no commitments is just the ticket for no complications.

Military nurse Lt. Cassandra “CJ” Lawson has seen too much. All she wants is quiet family time with her sister. Except, when her sister leaves town for a part in movie, CJ is left filling in for one little job—cozying up to a wealthy jetsetting billionaire.
What happens when simple and uncomplicated, becomes anything but? 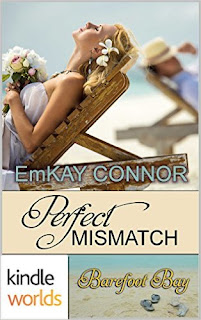 How does a wealthy, overworked CFO at a Fortune 500 company find a man when every guy she’s dated is more interested in positions and power than in her? Cue the violins for an Italian pizzeria owner from Philly with a track record of dating disasters and a real desire for love. Both apply to PERFECT MATCH, a TV reality show advertising cutting edge technology to pair up ideal mates. Matches so perfect, the show guarantees a wedding before the weekend is over.

But when Elizabeth Ellis and Val Corelli arrive at Barefoot Bay to star in the show’s premiere episode, they discover the producers’ idea of a perfect match is a lot different from their own. 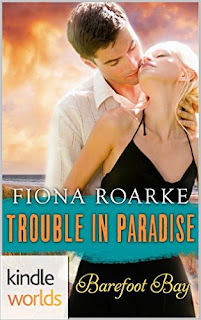 Can Barefoot Bay work its magic when there’s trouble in paradise?

Sexy, single hunk JD Macalister never expected to fall so hard or so fast. He’s been burned by love—and a long-distance relationship—before and swore he’d never get hurt again. But the blonde beauty in the jade-green dress he meets at a friend’s wedding isn’t going anywhere. Especially not out of his arms.
Samantha Duke can’t take her eyes off the tall, dark and dangerous-looking man she spotted the moment she walked down the aisle. Their instant connection dazzles her. And once he reels her into his grasp, she knows one night—or a hundred nights—will never be enough. But that’s all the time they have, one hundred nights before she leaves JD behind.

Castle in the Sand
Jeannie Moon 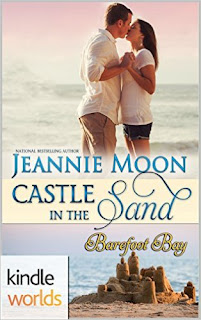 Josie DeMarco moved to Mimosa Key three years ago to escape the scandalous heartbreak that destroyed her life. She has a job and friends she loves on the idyllic island off the coast of Florida, but her world is turned upside down when Tony Granville seeks her help to escape the relentless paparazzi stalking him.

As Prince Anton Edward, heir to the throne of a small European nation, Tony can’t lead a normal life with the responsibilities of his title, and the constant scrutiny of his father, King Edward, hanging over him. But when Tony is back with Josie, the only woman he’s ever loved, he realizes he’s willing to give up his crown to be with her. What he doesn’t know is if she would give up the life she’s made for herself to be with him.

Treasure in the Sand
Jill Monroe 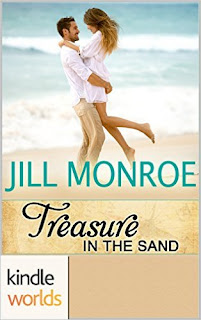 Molly Waiter grew up on the fantastical stories of sunken ships, pirates and lost treasure. As guardians of lost Le Cœur Surveillé – the Guarded Heart – each young Waiter is warned of the curse: the one who possesses the Guarded Heart will never find happiness in love. Fine with Molly! Ever since the hurricane that tore through Mimosa Key, she’s been off love and on the lookout for cash.

Bad boy adventurer Cooper Overton has been hiding a big secret – he has half the map leading to Le Cœur Surveillé. He’s determined to have Molly’s half, too, to save his tanking career. When the sexy beauty turns him down flat, he decides to heat things up – with seduction.
Molly’s determined to resist the gorgeous modern day buccaneer. She wants all or nothing, and no sexy usurper is going to horn in on her family’s two-centuries long quest. But how does she get the map from the man whose touch she can’t forget? Will she become one more Waiter to lose her heart? Or is Cooper her chance to find the jewel and break the curse? 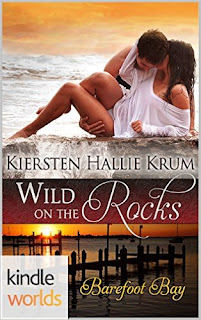 Driven by wanderlust and insatiable curiosity, Quinn Forrester views every new gig for her mixologist business as another chance for adventure. Until the night she wanders down the wrong hallway and witnesses a mob murder. After a week on the run, lack of funds and few options land Quinn in Barefoot Bay where she takes a job tending bar at the swanky Casa Blanca resort…and hopes no wise guys show up to make her sleep with the fishes. But nothing whacks a low profile like having your Navy SEAL ex-husband walk through the door—especially when he’s the love of your life you left behind.

Wild on the Beach
Discovering his restless ex-wife at Casa Blanca—and still going by his name—is enough to drive Lieutenant Commander Jasper McQueen wild. When she ran out on their marriage, Quinn left him a broken man. Now with his career in jeopardy and his sexy ex-wife at hand, Jasper is ready to chuck responsibility and submerse himself in a hedonistic affair—all sex, zero emotions—with the woman he won’t forgive and can never forget. And this time, when they’re done, it’ll be Jasper who does the leaving.
Wild on the Rocks
But a mob enforcer has tracked Quinn to Barefoot Bay. With her days numbered, Jasper may be her only shot at living through the night—if Quinn can get him to believe in her one last time. 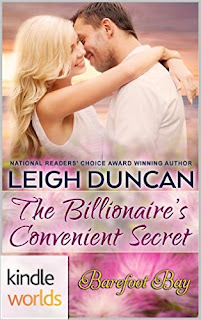 His secret might save the Super Min, but will the truth cost him his heart?

Tasked to bring a group of mom-and-pop convenience stores under one corporate umbrella, willowy blonde Charlotte Oak seizes the opportunity to secure her future…by any means necessary. But the hunky clerk who refuses to sell the Super Min to her not only blocks Charlie’s path to success, he forces her to take a good, hard look at herself. And she doesn’t like what she sees. Self-made billionaire Josh McLean does, though. When the golden-haired beauty struts into his Aunt Charity’s Super Min, Josh wants nothing more than to wine and dine the newcomer like only the head of a Fortune 500 company can…until he discovers Charlie’s real purpose in coming to Barefoot Bay will destroy the heart and soul of Mimosa Key. 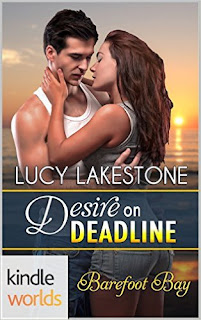 Ambitious reporter Roz Melander can’t return to her big-city career until she saves the struggling Florida newspaper her family founded. But rescuing the Mimosa Gazette won’t be easy with handsome nemesis Alden Knox in her way. Cynical after working in the tabloids and haunted by an old mistake, he’s starting over at the upstart Times, covering the glitterati streaming to the island’s Barefoot Bay resort. When a fishing boat blows up in the Gulf of Mexico with a famous actor on board, both scramble to get the scoop on why. Roz is in it for the news, and Alden’s in it for the gossip — but someone will go to great lengths to stop either of them from finding out. As they chase clues, they face another obstacle: their simmering attraction. Working together against a dangerous enemy might be the only way to survive, but can they get the stories they need when what they really want is each other? 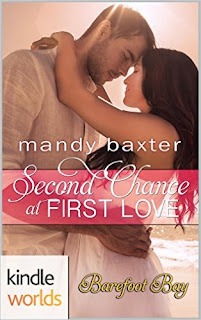 The last thing Emily Proctor wants to do is attend her ex-boyfriend, Brad’s wedding. But if she ditches the posh, destination affair, everyone will know that she’s a coward—not to mention the fact that she still isn’t over the heartbreak at being passed over for her former best friend. The only thing that could be more humiliating than going to the wedding is going alone. No way is Emily going to let that happen…

Chance McCall has been in love with Emily for as long as he can remember. She was his first love, the only girl he could never get out of his head. So when she asks him to attend her loser ex’s wedding and pose as her fiancé, he’s more than willing to play the part. The beautiful resort at Barefoot Bay is the perfect place to charm and romance her. But when he realizes that Emily isn’t over Brad—and that Brad might not be over Emily—Chance has no choice but to step up his game or miss out on a second chance at his first love…

Hold on To Forever
Maria Geraci 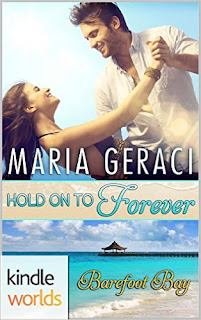 HOT, RICH, AND POWERFUL MEETS HIS MATCH AT A DESTINATION WEDDING IN BAREFOOT BAY

Jack Martinez has the world at his feet. Heir to Florida’s most lucrative personal injury law firm, women love him and insurance companies quake at the mention of his name. But Jack harbors a secret wish. He wants to start a small practice of his own, away from the limelight, and he’s counting on his younger brother to finish law school and take his place at their parents’ firm.
Felicity Reed wants to save her family’s dying PR company. Landing a big client like Jack would be a dream come true, but she’s made a pitch and he’s already shot her down. Which makes it awkward when her baby sister and Jack’s younger brother decide to do a destination wedding at the Casa Blanca Resort in Mimosa Key.
When the soon-to-be newlyweds announce that they’re deferring law school, Jack offers Felicity a deal; help him convince the young couple to stick to their original plan and he’ll give her PR firm a slice of his business. Which seems easy enough until Felicity finds herself actually falling for the arrogant ambulance chaser. Now she’s going to have to make a choice between family loyalty or a chance on a forever love.

When You Touch Me
Marilyn Baxter 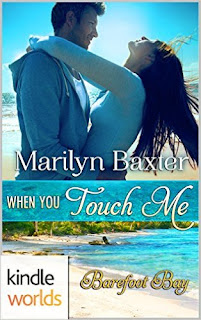 A woman whose touch can heal. A man who doesn’t want to believe.

Family woes bring Jillian Logan home to Mimosa Key, but she faces more trouble in her new job as a massage therapist at the Casa Blanca Resort in Barefoot Bay. Right away she’s given a special assignment: a wounded soldier who is a good-looking player with sex appeal and who threatens to throw her delicately balanced life off-kilter. Sam Hartman, AKA Hart Throb, views the beach as just another sandbox all too reminiscent of the hellhole where he was injured. And the alternative therapies that Jillian offers him? He considers them pure voodoo. He would rather move their relationship off the massage table and into his bed, but as much as he wants her touch, it forces him to face the demons that still haunt him. Can the heat of their unlikely connection heal them both?

KINGS OF MAYHEM by Penny Dee 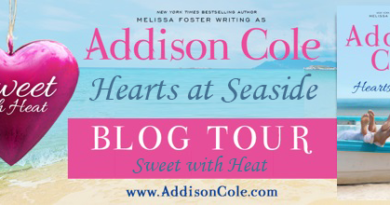