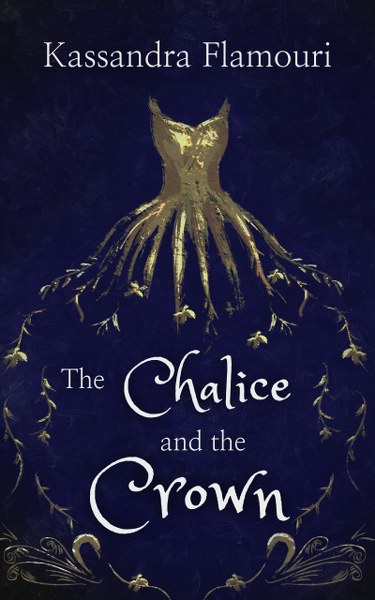 The Chalice and the Crown
by Kassandra Flamouri
Genre: YA Fantasy

Driven, talented, and determined to live up to her family’s fame, Sasha Nikolayeva is ballet’s crown princess. But just when Sasha lands her most prestigious role yet, she falls prey to a host of disturbing neurological symptoms that threaten to end her career and her very life. As her mind and body deteriorate, Sasha spirals into a nightmare world where beauty and cruelty exist in the same breath and villains rule from the shadows.
In the glittering, sharp-edged City of Roses, Sasha is no princess. She’s a thrall, a slave. Thousands like her suffer in cursed silence while citizens enjoy the splendor of the City, blissfully unaware that their servants are anything more than living dolls enchanted to do their bidding. But the City’s slavers know the truth, and they are always watching. One misstep could cost Sasha her life—or her soul.
Even as she endures the violence and indignity of captivity, Sasha can’t help being drawn to the beauty of her nightmare world and the underground rebels who offer her friendship, shelter, even love. Before Sasha can break her chains for good, she’ll need choose between the life waiting for her at home and the countless lives she could save if she stays. To choose a nightmare over her real life, her future, would be madness…but maybe a little madness is just what it takes to change the fate of a city built on lies.
Dreams and reality perform a captivating pas de deux in this tale of legacy and longing. A lyrical and original fantasy that, like its heroine, has the soul of a dancer.
– Adi Rule, author of STRANGE SWEET SONG
Goodreads * Amazon

There’s food. They throw a few crusts of stale bread into the cage and laugh as we fight over them. A dirty, stubbled knee smashes into my face as I reach into the melee with one hand and shove aside a frail old woman with the other. My hand closes spasmodically around a scrap of bread but, as I bring the prize to my lips, another girl tries to snatch it from me.

I jerk away and bite her grasping fingers, lips pulled back from my teeth. She glares at me and rubs her hand, like I’ve done something rude, like she has every right to my food. I glare back and chew as slowly as possible, both to make it last and to rub it in the thief’s face. I hope they sell her soon. She’s been a steadily growing pain in my ass for weeks now.

I’m not sure what it is that annoys me so much, there’s just something about her. Every time I see her stupid, pouting face, I want to slap it. I try to remind myself that I don’t know her, she’s probably a nice person—and anyway, why shouldn’t she pout? We gave up hope of escape long ago. Most of us don’t even bother looking beyond the bars of our cage. We’re broken, hopeless, wretched scraps of flesh and bone. If ever there was a situation to warrant a good pout, this is it.

It’s no use—I hate her. I hate every inch of her, from her stupid blond head to her once no doubt perfectly pedicured toes.

She used to be pretty. But now her long golden hair is no longer gold so much as a dull sand color, almost brown, and it hangs in greasy tangles around her face.

Not that I can point fingers. My hair looks—and smells—like something you might find smeared on the bottom of your shoe. Several weeks’ worth of grime has crusted on my body and raised angry, putrid rashes in the creases of my elbows, armpits, everywhere skin touches skin.

But at least I’m alive. A few days ago there was rain, and the next morning one of the girls began to cough and shiver. Last night the guards pulled her corpse from the cage and left it by the roadside. Our only response was to take advantage of the extra leg room.

The giddy surge of relief lasted no more than a day. New aches and pains arrived to take the place of old cramps, and now we shove and twist against each other just as violently as before. Another inch or two and I could unbend my knees. Another foot and I could lean against the bars.

We need more space. I consider the pouter, eyeing her emaciated form, and smile as thunder rumbles in the distance. 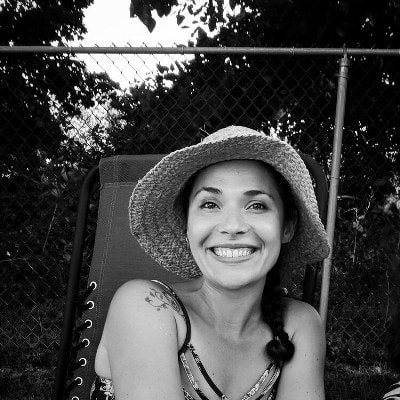 In retrospect, I probably should have realized a lot earlier that I was meant to be a writer. Even as early as kindergarten, I struggled to pay attention in class because the outside world was just not as interesting as what was going on in my head. By that time, I had already made my storytelling debut (“Squirm the Worm,” delivered at age three) and had spent countless hours playing make-believe with my 284 stuffed animals, every one of whom had a name and detailed backstory.
Though I quickly learned to pay attention (or at least look like I was paying attention) during school hours, I retained a tendency to daydream and a love of stories. When I left high school to attend the Sunderman Conservatory at Gettysburg College, I learned to translate both emotional and programatic content into music. Now, as an exam prep and college essay tutor, I have the time and flexibility to really dig into fiction again. My work has appeared online and in print in such venues as Timeless Tales Magazine and Quantum Fairy Tales.
Website * Facebook * Twitter * Instagram * Amazon * Goodreads 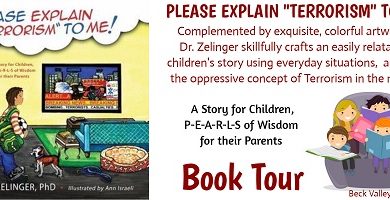 [Review] Please Explain Terrorism to Me: A Story for Children, P-E-A-R-L-S of Wisdom for Their Parents by Laurie Zelinger and Ann Israeli 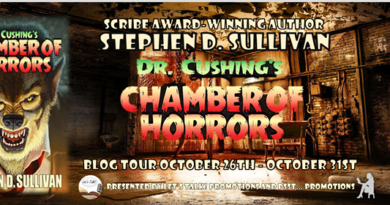