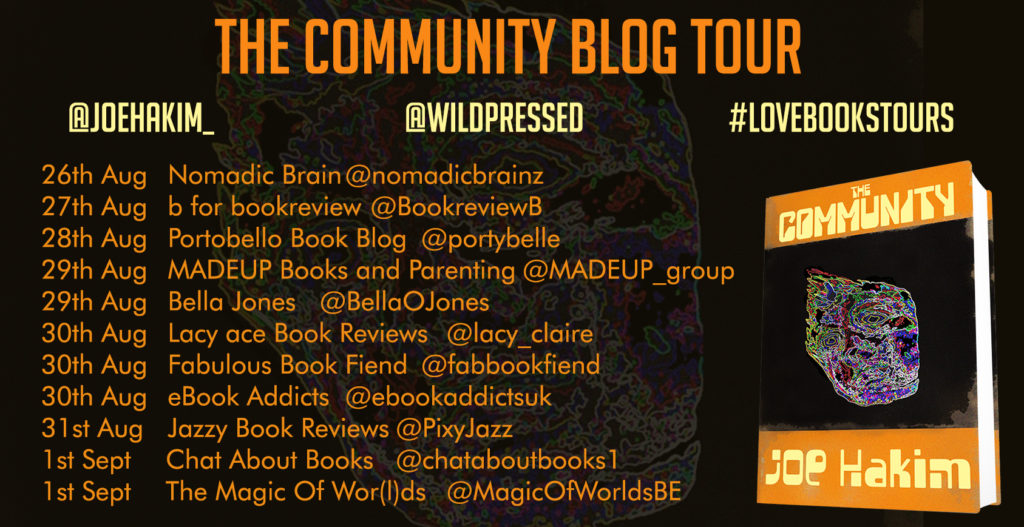 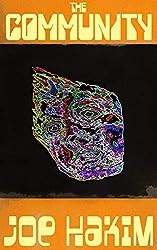 Joe Hakim draws the reader into the heart of a disenfranchised community impacted by strange forces beyond its control. A group of friends: separated by time, choices, and circumstance are reunited by their shared encounters with an uncanny presence that looms over their lives. The seeds were sewn in their childhoods, now they must try and understand what is happening, before it is too late.

Raw and uncompromising, The Community fuses social commentary with a dose of sci-fi horror, to cast a light on an existence spent in the Void.

I open the door and slide off my seat and out of the van. Chris does the same, and we wait near the front door. Ten minutes later, a sweaty, red-faced Kev approaches. He pauses a moment, places his hand on the van.

‘Alright lads,’ he says, puffing. ‘Heat’s fucking relentless today, innit? Feel like I’m in the foreign legion all over again.’

He gives my hand a bone-rattling shake.

‘I bet they do well when you’re in, eh?’ Chris says, and starts laughing. No one joins in, so he stops, abruptly.

Kev stands up straight and eyeballs him.

I’m tempted to say nothing, let Chris dig himself in deeper until he gets gobbed, but we’ve got work to do so I try to change the subject.

‘Sorry we were late, Kev. But we’re all revved up and ready to go.’

‘Shall we have a look then?’ I say, loudly, hoping to break the tension.

Without taking his eyes off Chris, Kev reaches into his pocket and pulls out his keys. It’s your standard terraced house, no front garden. Kev pops his key in the latch.

‘Had to get new locks fitted and everything,’ he says, opening the door. ‘After you, fellas.’

Chris and I walk in. It has the typical terrace interior: a hallway leading directly to the bottom of the stairs, with the living room off to the left as you walk in. Dankness hits us, the air thick with the fusty smell of damp and fermenting rubbish. As we enter the living room we’re confronted with a scene of utter devastation. The room is filled floor-to-ceiling with junk and debris. There’re three huge, old TVs, a sofa that has been mortally wounded and is spilling its foamy guts all over the floor, a smashed sound-system with pock-marked speakers, and countless bags filled with god-knows-what.

Tattered scraps of wallpaper peel away from the moon-crater surface of plasterboard, which has been scribbled on over and over again. A mad scramble of indistinguishable marker-pen cave-art. Bike frames lean against one wall, a sagging bookshelf overrun with various tins and bits of bric-a-brac slouches against another.

Discoloured curtains, thick with dust, stop the sun from throwing light on this whole sorry scene.

‘Fuck me, what happened?’ Chris says, and the question is left hanging like the shredded lightshade that dangles from the ceiling.

Kev appears. Stands with us for a moment while we take it all in.

‘Wait until you see the fucking kitchen,’ he says.

Joe Hakim lives and works in Hull. As a performance poet, he’s performed at venues and festivals around the UK, including Latitude, Big Chill and Edinburgh Fringe Festival. He was co-host and organiser of Write to Speak, a series of spoken word events and workshops that took in place at Hull Truck Theatre from 2009 to 2013. In 2016 he toured and performed with LIFE, a Hull-based punk band, performing on the UK leg of the Slaves European tour. In January 2017 he travelled to Trinidad with The Roundhouse and Wrecking Ball Press as part of the Talking Doorsteps project, assisting in the delivery of workshops and helping to forge international links between spoken word organisations and projects. This culminated in a performance at the BBC’s Contains Strong Language festival in September 2017, which featured young people from Trinidad’s 2 Cents Movement working alongside young people from Hull’s Warren Youth Project and Goodwin Community Centre. Theatre work includes co-writing and developing Omni-Science with Brick by Brick, performed at Assemble Fest 2017, and Come to Where I’m From, developed in association with Paines Plough performed at Hull Truck in May 2017. He is currently working with schools in Hull as part of First Story. The album ‘The Science of Disconent’, his second with musician Ashley Reaks, was released in 2018.