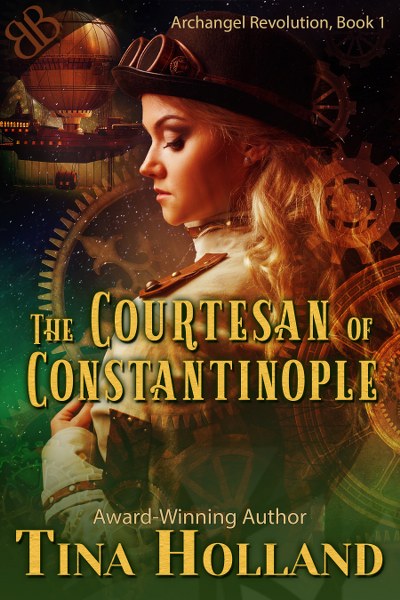 Laurel Gunn’s freedom and body were traded for queen and country following her husband’s death on the battlefield. Laurel is a courtesan, a spy, and a fae. Like most Fae, she is not free.
Doctor Benjamin Gunn is sent to investigate a body for clues as to The Cleaver’s identity. Ben has been keeping secrets and is unsure if he can reveal what creature he is to Laurel, and why he is among the living.
Constantinople, also known as the Global City, is filled with politicians, espionage, and magic. In a world of spies, not everyone is who they seem, but those seeking justice aren’t even human. Laurel must tread carefully as allies become foes and her very fate lies with England’s Queen.
Award-Winning, romance author Tina Holland takes you on an electrifying journey into retrofuturistic Victorian England, where technology, magic, and murder collide! This spine tingling adventure will keep you on the edge of your seat from beginning to end!
*Not intended for readers under the age of 18.
Add to Goodreads
Amazon * Apple * B&N * Kobo

Tina Holland was born in Frankfurt, Germany to military parents and is a self-proclaimed military brat.
Tina began her career by attending a Romantic Times Convention in 2003, and writing a short story for Kathryn Falk’s Bordella series. After additional encouragement Tina decided writing was a dream worth pursuing. Her debut e-book, The Pilot and the Pinup was released by Liquid Silver Books in 2005.
Tina continues to write as her schedule allows. She is active in RWA online chapter and also a member of Writer Zen Garden and FM Word Weavers. When Tina is not writing she can be found enjoying her hobby farm in North Dakota. It may seem like a desolate place but with her husband, horses, dogs and cat, it’s rarely lonely. It’s the perfect fit for a wonderful imagination and an opportunity to be a little naughty.
Website * Facebook * Twitter * Bookbub * Amazon * Goodreads

Follow the tour HERE for special content and a giveaway!
$10 Amazon Gift Card and digital copy of Tina Holland’s “Fireproof”
a Rafflecopter giveaway

[Blog Tour ] In This Breeze by Kathleen Maree