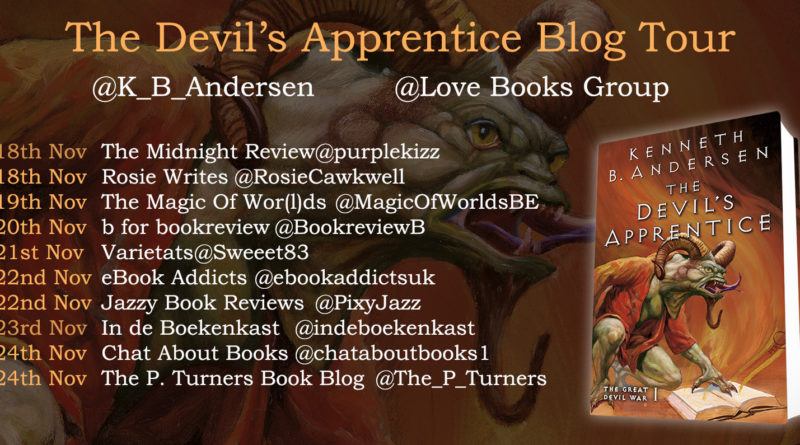 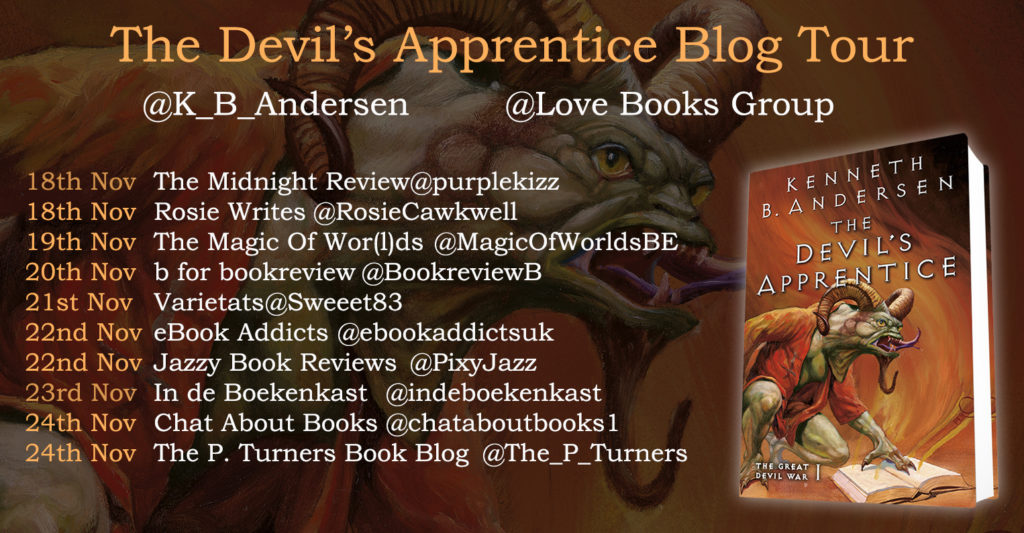 The Devil’s Apprentice
by Kenneth B. Andersen

Philip is a good boy, a really good boy, who accidentally gets sent to Hell to become the Devil’s heir. The Devil, Lucifer, is dying and desperately in need of a successor, but there’s been a mistake and Philip is the wrong boy.

Lucifer has no other choice than to begin the difficult task of training Philip in the ways of evil. Philip is terrible at being bad, but when he falls in love with the she-devil Satina and experiences the powerful forces of love and jealousy, the task becomes much easier.

Philip finds both friends and enemies in this odd, gloomy underworld–but who can he trust, when he discovers an evil-minded plot against the dark throne?

The Great Devil War is a gripping and humorous tale about good and evil seen from a different perspective, making the reader laugh and think. It’s filled with biblical and historical characters and set in a world beyond your wildest dreams. Or nightmares …

“Do come closer,” said the dark figure. The voice was at once incredibly calming and incredibly frightening. Like a field of flowers filled with bear traps. “Don’t be afraid.”

His knees trembling, Philip walked the last few steps to the throne.

At this instant it was as if the flames from all the candles grew. The shadows contracted, and Satan came into view.

He was dressed in a black suit with a long, dark cape hanging off his shoulders. His hair was slicked back and shiny as black silk against his bone-white skin. Two spiky horns curved in a handsome bow beneath his hairline, and on his chin he wore a carefully groomed goatee. And then there were the eyes… The terrible eyes… They were so black that even the deepest grave in the darkest winter night was like a well-lit ballroom in comparison. Philip stared into them and felt the world entwining around him. This glance allowed you no secrets. Not even those you didn’t even know you had.

But something was wrong. Fine chinks had formed in his black horns, and in several spots, tiny flakes had fallen like chips of old paint. His dark eyes were dull and bloodshot, and sweat glinted on his upper lip. Yes, something was very wrong, and it was made even more obvious by the fact that the Devil was trying to hide it behind his water-slicked hair and fresh-pressed clothes.

“Welcome, dear friend,” the Devil said, slowly leaning forward. The right side of his mouth was raised in a crooked smile. “I’ve been looking forward to meeting you. My name is—” he lowered his voice to a rolling thunder, “Luci… ach… Luci…”

A bloody coughing fit abruptly halted the Devil’s welcome speech, and his pinched face suddenly grew flaming red. He coughed and spluttered until he nearly choked, and without thinking, Philip leapt onto the throne and patted him on the back.

“Thank you,” the Devil groaned when he could breathe once more. “Thank you.”

“Do you feel better?”

The Devil cleared his throat, a little embarrassed. “Yes, thanks. I’m fine. As I was saying, my name is—” Again his voice lowered, but it wasn’t as dramatic as before, “Lucifer.”

I was born in Denmark on a dark and stormy night in November 1976. I began writing when I was a teenager. My first book was a really awful horror novel titled Nidhug’s Slaves. It didn’t get published. Luckily.

During the next 7 years, I wrote nearly 20 novels–all of which were rejected–while working as a school teacher. The rest of the time I spent writing.

In 2000 I published my debut fantasy book, ”The Battle of Caïssa”, and that’s when things really took off. Since then I’ve published more than thirty-five books for teens and young adults in genres ranging from fantasy to horror and science fiction.

My books have been translated into more than 15 languages and my series about the superhero Antboy has been turned into three movies.

A musical of The Devil’s Apprentice opened in the fall 2018 and the movie rights for the series have also been optioned.

I live in Copenhagen with my wife, two boys, a dog named Milo and spiders in the basement.