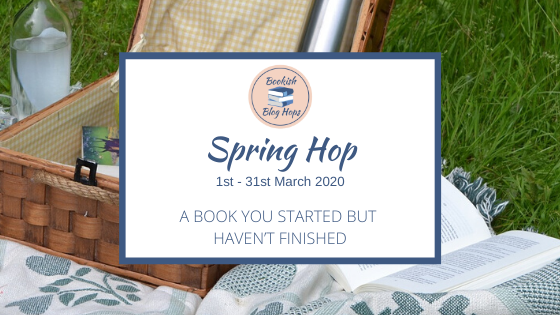 So today this wonderful buch of bloggers are answering what book they have started and haven’t finished, but before we read their answers let me we tell you my books.

I have been pretty luck in the fact that I have not encounted any books apart from this one going way back, but I have two books unread purly due to size and laziness

War and Peace is a fairly epic book in terms of size and it is my goal to one day finish both of these books.

Well, I’ll bite the bullet and be the first one to confess the “Reader’s Cardinal Sin” of DNF!

There have only been a few books that I actually haven’t finished–not because I gave up entirely, but because it got boring and quite frankly there were just too many books I found that I felt I’d rather be reading!

The first couple were actually available on the Goodreads app itself, back in the day, since they were old classics and made available through the Gutenberg Project: namely, The Scarlet Pimpernel by Baroness Orczy, and The Alan Quartermain Novels by H. Rider Haggard. The first, I’d seen so many film adaptations of, I wanted to know how the actual book itself went, and so I started it, grew bored almost immediately and gave it up, intending to go back to it “someday”… but that day hasn’t come in almost seven years, so I don’t know when it ever will. The second, I’d read an abridged version of King Solomon’s Mines once, and was so fascinated by it that I was curious to read the “unabridged” original novel… Man! Victorian-era adventure novels were so boring–who knew?? It was less about intrigue, and more about precise amounts, weights, and measurements… so I reached the point where Mr. Haggard takes an entire page to describe a sequence in which a man climbs a tree to chop down a few limbs, loses the head of his axe and it falls into a lake and floats on the water–but the scene itself was so bogged down by exactly how tall the tree was, exactly how far up the man climbed, exactly how far the axe head flew, exactly what it weighed, exactly the surface tension of the water, exactly what type of weather it was… that it lost its mystery and I no longer cared about the floating axe head or the survival of the characters. So I stopped reading and, as with Pimpernel, I’ve never gone back.

The last book I started without finishing is sitting with passive malice on my bookshelf, the bookmark still visible halfway through it: The Sword of Shannara by Terry Brooks. I’d discovered The Shannara Chronicles on Netflix when it first landed, and was very intrigued by the mix of post-apocalyptic earth with Tolkien-ish high fantasy vibes… but the show itself was rife with rather too much romantic angst for my taste–I wanted more of the magic and the characters and the worldbuilding. So when I found a Shannara title at a library book sale, I eagerly bought it and started reading… Friends, it was a struggle to even get halfway. Turns out the book I got predated the events of the TV series, so the characters were unfamiliar… the setting, also, was a bit different and not as vivid as I would have liked… and the pacing was so slow that I had trouble keeping track of exactly what all was happening, I lost interest in the characters… and so, it waits for me. I might get back to it at some point, as a more mature reader. Just not right now, I guess!

Okay so I am a reader that hates not finishing books, I will always try to push my way through to the end. However there is one book that I have never finished, and that also goes for the film version. What film/book could this be I hear you ask? My answer is A Clockwork Orange. The film was re-released in 1999 after being banned a few years after its original cinema release in the 1970s. I tried to watch it with my film studies class in 2000 and had to walk out of the cinema as I felt physically sick, what I saw on the screen left me feeling disturbed and disgusted. I wasn’t the only person to walk out or feel that way. A few years later in my mid-twenties I tried the film again and barely got through the credits, so I decided to try and read the book. I hated it, completely hated it. I could have finished reading it as it was compelling in a revolting and disturbing way. But I simply didn’t want to.

A Clockwork Orange is probably not the most disturbing thing I have read, yet it is the book that even now, the thought of it leaves me feeling physically ill.

I hate to DNF. I do have a few I gave up on though. I started reading Next by Michael Crichton in 2015 and got to page 108 (just over the 25% mark). I struggled to get there and in the end I put it back on my shelf where it’s remained since. It’s pretty obvious that the author did a lot of research for the book, but I found that it was too much at times and just made it feel more like I was reading a textbook than a novel. It took away from the story as opposed to adding to it. The book is still sat on my bookshelf so I may give it another try in the future though as several years have passed since my last attempt.

I must be a rarity because I will DNF quick! I’ve DNF’d at least three already this year but there may be more. It does not bother me at all, whether it’s the first chapter or 40% through. If I’m not having a good time, off it goes! I even have a DNF shelf on Goodreads. The three I DNF’d this year were: Gheist, Big Bad Wolf, and A Monster Escapes. They actually all have high ratings on Goodreads so it just goes to show that what works for one reader might not work for another!

The last book I started but did not finish was Tin Man by Sarah Winman. I just could not gel with the writing style. I reeeally hate to DNF but sometimes, it has to be done.

#BlogTour All Over You by Ayden K. Morgen