Liv is smart, sexy, and confident. Just ask her. She isn’t shy. Her photography business is starting to really take off, she has amazing friends, and there has never been a shortage of boyfriends. With so much to offer, why hasn’t she ever fallen in love?
Zac followed his dream and just opened his first restaurant. He is also about to marry the woman he has loved since he was in high school. He has his life right on track and couldn’t be happier.
When Liv is hired to photograph Zac’s upcoming wedding, she realizes why she’s never been in love before… She hadn’t met the right guy yet.
When Zac gets to know the photographer for his wedding, he can’t stop thinking about her. It doesn’t change his love for his fiance’… but Liv fascinates him and that scares him more than he wants to admit.
What happens when you fall for a guy that already belongs to someone else? 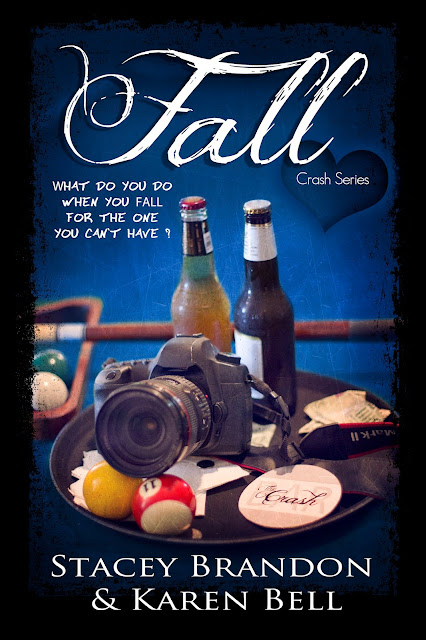 “Another Awesome Awesome read from the Brandon-Bell duo. Laugh out loud, sweet romance!” – Swoon Worthy Books
“I am officially hooked on this incredible writing duo. Stacey and Karen are unbelievable.” – Goodreads Reviewer

I spin around and come face to chest with a dark blue dress shirt and gray patterned tie. Raising my chin up, and then even farther up, I encounter the underside of a strong jawline. Clean shaven, but dark enough to suggest a razor will be needed again soon, there’s a strong cleft in the chin and I inhale sharply with recognition. It’s him.

Dark, thick hair tops an angular face that I itch to photograph. That bone structure! His warm chocolate eyes are heavy lidded and lazily sexy but the thin silvery scar bisecting his left eyebrow leaves me no doubt that it’s him. He’s my idea of male perfection. Even though he and I have never been introduced, this beautiful stranger has unknowingly played a starring role in many of my fantasies over the past year.
Taking a small step back, I try to give him a normal amount of personal space. What I really want to do is share his personal space.
He smiles, one side pulling up higher than the other, and puts his hand forward. “Hello.” The deep smoothness of his voice makes me forget how to breathe. What the fuck is wrong with me? I don’t get nervous around guys…I make them nervous. I’ve been told that I’m an acquired taste but I’ve always taken it as a compliment. Who wants easy and uncomplicated? That would be boring.

I continue standing in front of him with hands hanging limply at my side and mouth slack. I have to accept that for the first time, I can’t think of a single thing to say.
“Zac!” Logan booms, saving me. “I want you to meet Liv. She’s the one I told you about.” My best friend’s fiancé comes over, standing right next to this god among mortals and looks at me expectantly.
I think I’m supposed to be doing something now. What in the hell am I supposed to be doing?
“Liv?” Charli comes closer and elbows me hard enough to push my fog of lust away a little…a very little.
“Damn,” I breathe out and the guys erupt in laughter. Charli cringes but she knows me well enough that she shouldn’t be surprised. My mom says I was born without the ability to filter my words. My other mom is sure it’s a learned habit I picked up from her. I feel like this is an asset. I don’t bullshit people.
I drag out all the social niceties my poor mom has tried to instill in me. “It’s nice to meet you, Zac” I manage to spit out. For my friend’s sake, I try to appear nice and normal. Hopefully, I’m pulling it off, but when I put my hand out and it disappears into his, I have to keep reminding myself it’s not polite to ask someone you just met if you can see them naked.
There’s a twinkle in the bottomless depths of his eyes and I find myself desperately needing to swallow. “You too, Liv.” He then twists to the side and pulls someone out from behind him. He puts his arm around her. “This is my fiancé, Sabrina.”
Fuck me. Of course, she is. 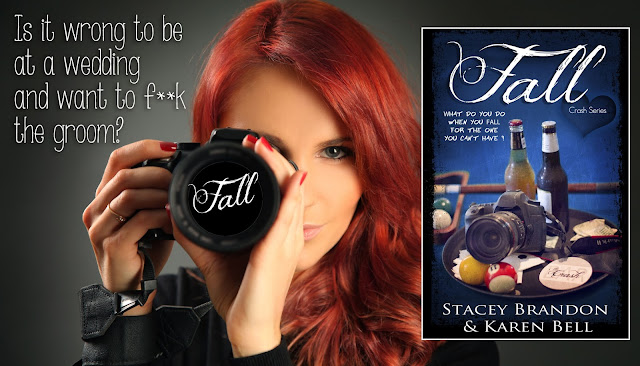 I pull my best friend out of her chair and drag her off to the ladies’ room. Logan furrows his brow but keeps his seat. He’s used to me hauling Charli away when I need her. They’ve been married for a couple months now but she’s been my best friend for my whole life.
“What’s wrong?” she asks as soon as the door swings shut behind us.
I bend down and look under each stall door to make sure we are alone and then crumple onto the bench in the small sitting area that adjoins the bathroom. “Charli, be honest with me. Is it wrong to be at a wedding and want to fuck the groom?”
“Oh, Liv…” Charli lowers herself beside me and pulls my head over to rest on her shoulder. “I was afraid of this.”
I jerk my head up in shock. “What do you mean, you were afraid of this?” I yell. “You knew and didn’t say anything?” I’m practically shrieking now.
“Shut up! Someone is going to hear you! In case you forgot, there is a wedding reception taking place out there and I doubt you want Zac and Sabrina’s family and friends to realize you’re hot for him!” Only Charli can yell at me in a whispered voice and sound so serious.
“If you suspected, why didn’t you tell me?”
“If you felt like this, why didn’t you tell me?
“Good point. I was embarrassed,” I admit.
“You’re never embarrassed,” she counters.
“Okay, well maybe not embarrassed… but ashamed. I don’t play with things that aren’t mine.  I really like Zac. Yes, he’s amazing to look at but he’s also fun to be around. He gets my sense of humor, which probably means he’s a little off, and he isn’t intimidated by me, either. He loves his restaurant and what he does, he adores his brother, and he loves…”
“He loves Sabrina,” Charli finishes.
I bury my face in my hands and groan in frustration. “I know.”
“Do you?”
“Yes, damn it. I do. And I can’t even wish that he didn’t love her because then he’d be a douchebag for stringing her along. I want him but if he wanted me too, then that would be awful. I don’t want him to doubt his love for her and I certainly couldn’t want someone that is capable of cheating. I’m completely screwed.”
“Yep, pretty much.” She wraps an arm around my shoulders. “But I still love you. And I know the right guy is out there and when you find him, this won’t even matter anymore. In the meantime, I’m sorry.”
“I can’t even get drunk. I still have to take the rest of the damn wedding pictures.” 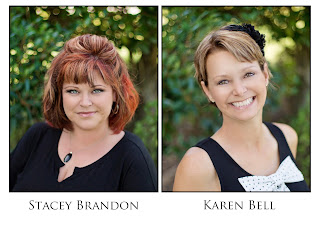 Once upon a time, these two hookers became best friends…
Stacey Brandon and Karen Bell both live in the same small Texas town on the Gulf Coast, are happily married and the proud Moms of awesome kids. Stacey owns and runs a photography studio and Karen designs and sews her own children’s clothing line. They met over fifteen years ago when they decided to turn one large professional space into a single home for both businesses.

Well, that’s all the boring facts expected to be included in an “about the author” page, right? The reality is so much more fun. Stacey and Karen and their families spend holidays together, travel together… and generally turn every situation into something crazy and chaotic. They are both fluent in English, Sarcasm and Profanity and have decided the irrefutable proof of their best friend status is how often people assume they are “together” when in public. The poor husbands are good sports about it… and might even encourage this misconception at times for sheer entertainment value.
When Karen battled cancer… and kicked its ass… in 2014, they learned to value every day and quit worrying about what others think. Do what you love! Karen is happy to take advantage of the situation though. She loves to remind everyone she “had the CANCER, dammit!” and now she can always and forever claim the last brownie 😉 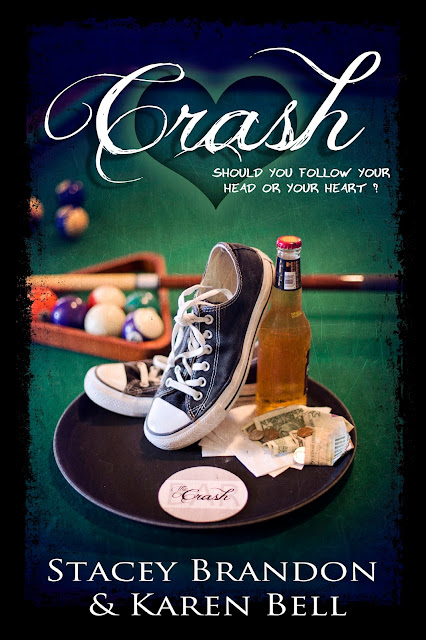 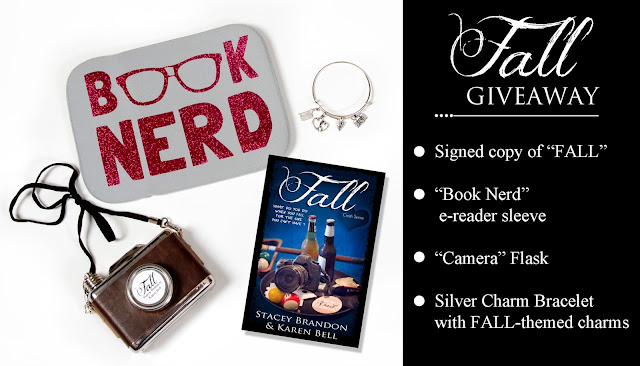 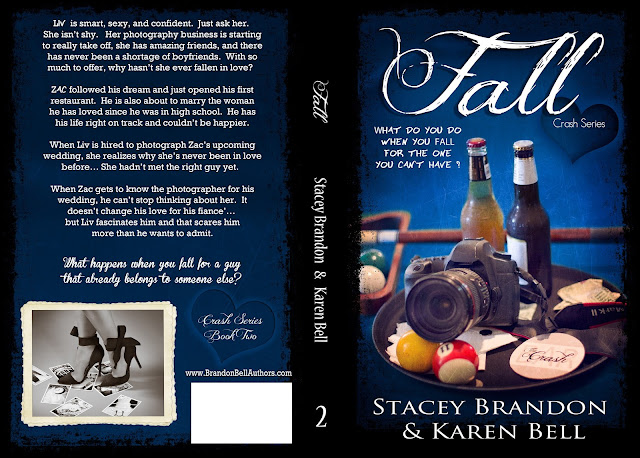