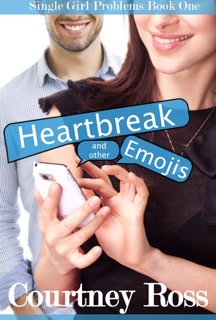 “He dumped you with a text message, that was filled with emojis.”
These were the sobering words that brought Zoe to her ultimate conclusion: she was done with it all. She was done dating losers. She was done being humiliated. She was done with relationship karma, and more importantly, she was done having her heart broken. After a string of breakups, Zoe no longer saw any reason to keep looking for a perfect guy she was sure didn’t exist. So, after some careful, or rather crazed and saddened thought, she was ready to step into her lot as the permanent single girl. It wasn’t ideal, but she was sure she could get used to being single with a few cats and years of pent up sexual tension. It was better than keeping up the fruitless search for love.
Just as she was coming to terms with her grim fate, she met Sam, a cute bartender, and the only other person with as tragic a love life as hers. As the crazy pair swap breakup stories at his bar, Zoe begins to contemplate her new stance on love. Was she really ready to let it all go? Or did she have a little more energy to keep up the quest? It didn’t help that the cute, and very single, bartender was making her question everything she thought she knew about relationships, dating and love.
Heartbreak and other Emojis is a fresh and funny look at modern day romance, as it explores dating, love, and being all about your selfie.

Heartbreak and Other Emojis playlist

Courtney Ross grew up in Florida with a passion for writing. As a child she wouldn’t go anywhere if she didn’t have her notebook to jot down ideas. Her teenage years were spent writing and making movies with her friends. By the time she went to college to get a degree in English Literature, she was well versed in how to create intriguing and poignant tales of love and relationships. Courtney’s storytelling style is contemporary, humorous, with just the right amount of heartfelt sentiment to warm the reader’s heart. Without a doubt, romance is her favorite genre to write and read. Her books are a mix of classic love story with a modern day twist.
When Courtney’s not writing she is playing with her daughter, binge watching TV shows with her hubby, or reading with a cup of coffee (or wine).

Twenty-five Random Things About Me and my book

[Promo] Bodyguard to a Sex God by R.J. Scott