About Murder, She Encountered 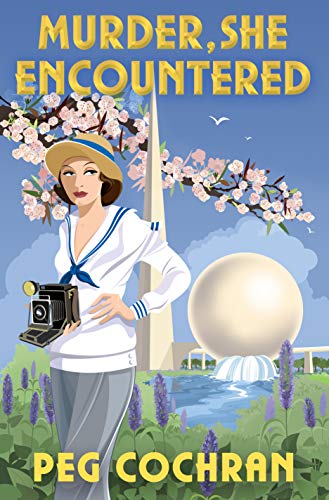 A gutsy Manhattan socialite encounters murder and corruption at the World’s Fair in this captivating historical cozy mystery for readers of Victoria Thompson, Susan Elia MacNeal, and Rhys Bowen.

New York City, 1939. A rising star at the Daily Trumpet, Elizabeth “Biz” Adams has been sent to the World’s Fair—billed as the “World of Tomorrow,” a look toward a brighter future even as the drumbeats of war grow louder—to cover a robbery. What she stumbles upon instead is a dead woman, dumped into the Aquacade’s pool with a nylon stocking wrapped around her neck.

Elizabeth snaps a photo as the police arrest Joey Dorman, a gentle young hot dog vendor who made no secret of his obsession with the murder victim. Even though she’s thrilled that her photo makes the front page, the fear and confusion evident on Joey’s face are haunting. So Elizabeth vows to prove his innocence—or his guilt—with her partner at the Daily Trumpet, Ralph Kaminsky. Meanwhile, her romance with Detective Sal Marino is heating up, and Elizabeth is more determined than ever to follow her heart.

But when Kaminsky’s efforts to expose the real killer land him in the hospital, Elizabeth is forced to continue the investigation on her own. And as she tries to narrow down the long list of suspects, she discovers a dark secret running through the Fair—a secret some would kill to protect.

Look for all of Peg Cochran’s delightful mysteries featuring Elizabeth Adams, which can be read together or separately:
MURDER, SHE REPORTED
MURDER, SHE UNCOVERED *my review
MURDER, SHE ENCOUNTERED

This is book three in the Murder She Reported series, and can be easily read as a stand alone book. There is so much going on in this story, its 1939 and the world is on the brink of war, there are boatloads of Jews arriving at the dock of New York City and also it is the time of the World Fair. Elizabeth ‘Biz’ Adams who is a photographer for the Daily Trumpet and her reporter friend Ralph Kaminsky head to the World Fair to cover a story about a robbery but instead they uncover a murder! A young woman is found dead with a pair of stocking’s wrapped around her neck and dumped in the pool at the Aquacade. They manage to get the inside scoop and find out the young woman’s name, but also discover there are a list of suspects. The duo not only investigate for the paper but try there hardest to find out who did it.

There is a few murders in this book, seemingly connected or are they? This is a great cozy mystery that will have to hooked and you will be taken back in time with all the wonderful sights of that time period.

Murder She Encountered is a great addition to the series and I cant wait to read more from Biz, Kaminsky and her possible love interest with Detective Marino.

Mystery writing lets Peg indulge her curiosity under the guise of “work” (aka research). As a kid, she read the entire set of children’s encyclopedias her parents gave her and has been known to read the dictionary. She put pen to paper at age seven when she wrote plays and forced her cousins to perform them at Christmas dinner. She switched to mysteries when she discovered the perfect hiding place for a body down the street from her house.

When she’s not writing, she spends her time reading, cooking, spoiling her granddaughter and checking her books’ stats on Amazon.

A former Jersey girl, Peg now resides in Michigan with her husband and Westhighland white terrier, Reg. She is the author of the Sweet Nothings Lingerie series

(written as Meg London), the Gourmet De-Lite series, the Lucille series, the Cranberry Cove series, and the Farmer’s Daughter ser 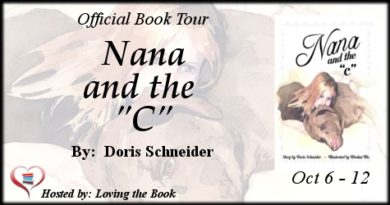 [Review] Nana and the “c” by Doris Schneider #lovingthebook

2 thoughts on “#Review Murder She Encountered (Murder, She Reported Series 3) by Peg Cochran”