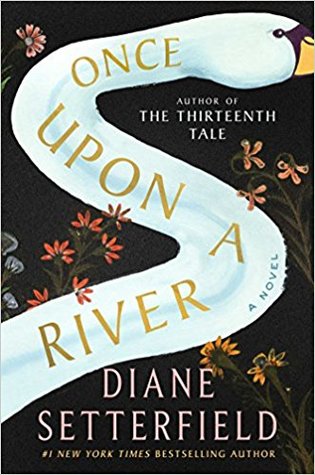 Once Upon a River
Diane Setterfield
e-book
464
netgalley

A dark midwinter’s night in an ancient inn on the Thames. The regulars are entertaining themselves by telling stories when the door bursts open on an injured stranger. In his arms is the drowned corpse of a little child.

Hours later the dead girl stirs, takes a breath and returns to life.

Is it a miracle?

Or can it be explained by science?

Replete with folklore, suspense and romance, as well as with the urgent scientific curiosity of the Darwinian age, Once Upon a River is as richly atmospheric as Setterfield’s bestseller The Thirteenth Tale.

#review Once Upon a River by Diane Setterfield 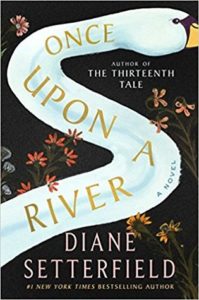 Firstly can I just say I love this cover! Once upon a River is a strangely magical book, quite different from my usual reads, and one that sucked me in. Set in olden times, it had that air about it of a time steeped in folklore and simpler times.  This is slow burner of a story I will give you that, with Setterfield giving you plenty of world building with the descriptions of the characters and environment surrounding them. The story centres around the patrons of an Inn, one night they are sitting telling tales and ghost stories when a stranger arrives carrying a little girl – it is clear that the little one is dead and the stranger is also in bad shape. The town folk of the inn set about to help the man, and a some time later the child return to life..

This is filled with elements of the paranormal, and intricately woven but if you are looking for a fast paced book you will not get that here, this is slow to build as I have said, and keeps a fairly slow pace throughout but will keep you attention no matter if you go in with this in mind.

About the Author:
Diane Setterfield is a British author. Her bestselling novel, The Thirteenth Tale (2006) was published in 38 countries worldwide and has sold more than three million copies. It was number one in the New York Times hardback fiction list for three weeks and is enjoyed as much for being ‘a love letter to reading’ as for its mystery and style. Her second novel, Bellman & Black (2013 is a genre-defying tale of rooks and Victorian retail. January 2019 sees the publication of her new title, Once Upon a River, which has been called ‘bewitching’ and ‘enchanting’.

Born in Englefield, Berkshire in 1964, Diane spent most of her childhood in the nearby village of Theale. After schooldays at Theale Green, Diane studied French Literature at the University of Bristol. Her PhD was on autobiographical structures in André Gide’s early fiction. She taught English at the Institut Universitaire de Technologie and the Ecole nationale supérieure de Chimie, both in Mulhouse, France, and later lectured in French at the University of Central Lancashire in the UK. She left academia in the late 1990s to pursue writing.

The Thirteenth Tale was acquired by Heyday Films and adapted for television by the award-winning playwright and scriptwriter, Christopher Hampton. Starring Vanessa Redgrave and Olivia Colman, it was filmed in 2013 in North Yorkshire for BBC2. The TV rights to Once Upon a River have even sold to Kudos (Broadchurch, Spooks, Grantchester).

Diane Setterfield has been published in over forty countries.

Diane lives in Oxford, in the UK. When not writing she reads widely, and when not actually reading she is usually talking or thinking about reading. She is, she says, ‘a reader first, a writer second.’ 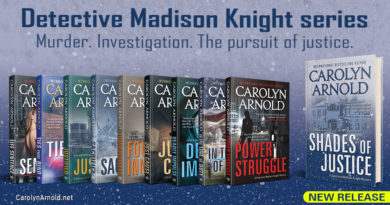