Release Tour for THE EVIL THAT WAS DONE by Michele PW

Brought to you by Forever Write PR

Michele PW is back with THE EVIL THAT WAS DONE, the shocking conclusion where long-buried secrets will finally be revealed.

Time is running out for Becca to prove she isn’t responsible for the recent disappearances in her childhood hometown, Redemption.

It’s happening again—people are disappearing.
And just like before, the finger is pointed at Becca.
She knows how it looks … and that she’s being set up.
Someone is following her. Sneaking into her house. Planting evidence to make her look guilty.
The problem is, she has no idea why.
The bigger problem is, no one believes her.
And time is running out.

Only Available on Amazon and FREE in Kindle Unlimited!

As the 2018 Paranormal Romance Guild Reviewers’ Choice Book Series Winner, the Secrets of Redemption series is a must read. Fans of psychological thrillers, romantic suspense, and mystery novels will devour the twisty and addicting series. Grab your copies today! Also, available in Kindle Unlimited!

It Began With A Lie, Book #1 on Amazon

This Happened To Jessica, Book #2 on Amazon

Read my review for The Evil That Was Done after this excerpt from the book:

“So, if we’re done grilling JD, maybe we can move on to other topics of interest now,” Barry said. “Like Daniel.”
I spilled my wine.
“Oh, clean up on aisle ten,” Barry said, as JD handed me his coaster napkin to mop it up. “Maybe we need to get a refill.”
“I’m good, really,” I said. The last thing I needed was more wine. Or to talk about Daniel.
“It’s not a big deal. Daniel can bring it over when he comes over.” Barry started signaling with his hand.
Wait a minute. Daniel was here? He was supposed to be working. That’s why he canceled our date. Did he lie to me?
A part of me wanted to march over to wherever he was and give him a piece of my mind. I had asked him straight out if he really wanted to do this, to try dating. I had already told him I would understand if he thought it was going to be too complicated for him to date me and be a cop in this town.
He assured me he wanted to try.
I believed him.
And, here he was, standing me up again.
A small voice inside me immediately wanted to argue—fifteen years ago, Daniel didn’t actually stand me up. And, regardless, Daniel wasn’t standing me up right then, because he had called to cancel.
Yet it somehow still felt like I was sixteen again, standing alone in the woods, wondering where Daniel was … and feeling like a total fool.
Of course, I couldn’t say any of that in front of all our friends. Maybe I should just leave. That would kill two birds with one stone. Not only would I avoid seeing Daniel, but I could also get away from JD and his strange, intense energy.
Before I could figure out how exactly to sneak away, there was Daniel, doling out drinks—including another glass of wine for me. He was wearing a blue tee shirt that brought out the blue in his eyes. His blonde hair was getting a little long, curling around the back of his shirt.
Speaking of his eyes, they darted between me and JD, but he didn’t say a word. Not only that, but his face was completely unreadable—a professional mask. His cop face. He pulled a chair over and turned it around before he sat down, so he was straddling it backwards. He was careful not to look at me, but I could still feel the sparks dancing between us. I was having trouble breathing, something that happened often when I was near him.
“So, since you’re here, does that mean Ellen is safe and sound?” Mia asked.
He took a pull from his beer. “No, but there’s not much we can do right now.”
“What happened?” Daphne asked. On the surface, her voice sounded neutral, like she was simply inquiring about an acquaintance, but I could hear the confusion and worry swirling beneath the calm.
He shrugged. “No one seems to know. She didn’t show up at work today, which is unlike her. They had tried calling her home and her cell, but there was no answer, so they called her mother. Her mother was the one who came in to file a missing persons report, but since there’s no sign of foul play, there’s not a lot we can do right now.”
I felt a shiver run down my spine, like I had just been blasted by air conditioning.
“What about putting an alert out?” Mia asked.
“We can, but she hasn’t even been missing for a day. It’s not a crime for an adult to disappear. We’re in wait-and-see mode.”
“And, Ellen has been known to just take off without telling anyone,” Daphne said darkly, pressing her lips together so hard they turned white.
“Not to mention it’s pretty common here for people to leave quickly, making it seem like they’ve disappeared,” Mia said, after a quick glance at Daphne.
“Yeah, I had heard that,” JD said. “Something about how, if the town doesn’t like you, it makes sure you don’t stay?”
Celia rolled her eyes. “It’s all a bunch of nonsense.”
“It is NOT a bunch of nonsense,” Mia said. “Weird things DO happen here. And, they have for years. Over a hundred years.”
“Weird things happen in every town,” Celia said. “It’s no different here.”
“I don’t know, we sure seem to have more than our share of weirdness,” Daphne said.

Oh My Goodness! This has been a great series from Michele P.W. and I am glad to have the chance to read them.
The Evil That Was Done is the third and final instalment of the Secrets of Redemption series and it MUST BE READ IN ORDER! I will try keep this as spoiler free as possible.
Becca once again find herself piecing her life together after the events of book see her memories of Jessica come flooding back. Her husband in jail is dragging his feet regarding divorce and we find out that he has siphoned off some of her trust fund, leaving her with little money, she takes in her friend Mia and Chrissy her stepdaughter as room mates and it would see that life is looking up., what with Jessica’s killer also in jail. That is until she starts dreaming about Aunt Charlie and this time Jessica is there!
My frustrations with Becca were ten fold in this book – she really made some totally bad judgement calls, and once again ignored the clues her Aunt and Jessica were giving her! If only she had listened then maybe she wouldn’t be a person of interest in a murder!
Once again I had an notion who was behind it all and I was super happy that I was right, but I had no idea just how insane and revengeful this person could have been! Yeah this book will definitely keep you toes, there are lots going on but it all flows seamlessly.
5 stars
~~~~~~~~~~~~~~~~~~~~~~~~
About the Author:

When Michele was 3 years old, she taught herself to read because she wanted to write stories so badly.

As you can imagine, writing has been a driving passion throughout her life. She became a professional copywriter (which is writing promotional materials for businesses), which led to her founding a copywriting and marketing company that serves clients all over the world.

Along with being a copywriter, she is also a bestselling, award-winning fiction and nonfiction author.

For fiction, she writes psychological thriller/mystery/romantic suspense novels. She also hosts a popular book and entertainment blog. Check out MPWNovels.com for more.

For nonfiction, she’s the main author and creator of the “Love-Based Business” series that include both business and personal development books. For articles and resources on business, writing, success and more, visit LoveBasedBiz.com.

She holds a double major in English and Communications from the University of Wisconsin-Madison. Currently she lives in the mountains of Prescott, Arizona with her husband Paul and southern squirrel hunter Cassie.

This sales blitz is brought to you by Forever Write PR.
For more information, visit our Facebook page! https://www.facebook.com/ForeverWritePR/ 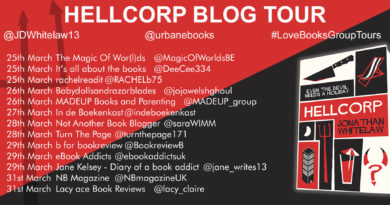 #Review Call Her Mine (Harmony Pointe #1) by Melissa Foster