Half Blood Princess
by Magen McMinimy 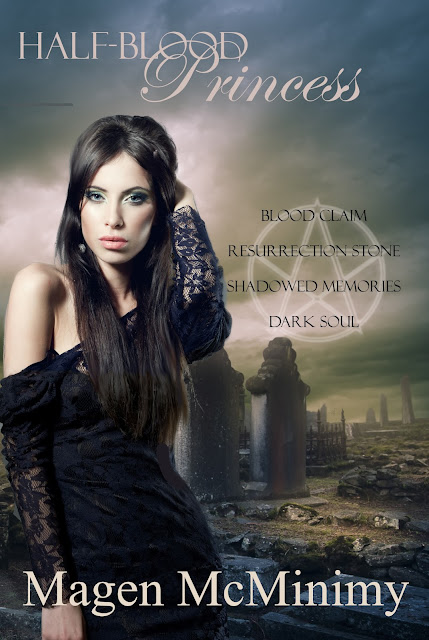 This box set contains the first four books in the Half-Blood Princess Series.

Blood Claim:
Half-Blood Vampire Princess, Sophia Daletsky, has spent the last eight months running from her oppressively cruel brother and her love sick ex. When Sophia comes upon the sleepy little town of Maldera Springs she finds a secret that’s been safely hidden from her people for years.

Sophia must decide between saving herself, listening to her heart, or protecting what’s been lost and protected by the sexy, secretive, and stoic vampire brothers Tavian and Dante Baikov.

Resurrection Stone:
The consequence of unspoken secrets has left Half-Blood Princess, Sophia Daletsky feeling alone and trapped.
With Dante having turned his back on her and Kara slinking around with untold intentions Sophia turns to Tavian, Sarah and Rachel as she tries to adjust to her new powers and an unsure future as Protector of Maldera Springs.
Things are never easy in the vampire world, as Sophia realizes as another part of her past catches up with her in this second installment of the Half-Blood Princess series.

Shadowed Memories:
In this third installment of the Half-Blood Princess Series, Sophia’s life is about to be changed forever.
With Sage’s life in the balance Sophia must call upon power she never knew coursed through her veins. Secrets that were once carefully hidden come to light as she fights haunting dreams, memories of Sage’s past, and a dark prophecy seeming destined to come true that will change all involved. Follow Sophia as she takes on a new path and finds what true love can really bring.

Dark Soul:
Life has never been so complicated yet so blessed for half vampire/ half witch, Sophia Daletsky. She and Sage struggle to understand and control Ashlyn and Andre, while they grow into untold powers at an alarming rate. Sophia, Sage, the guardians, along with Rachel, Sarah, Adelaide and the Coven of the Sun seek refuge in one of Cain’s many fortresses as they recover from Zillah’s attack and fight to protect one another.

Follow Sage and Sophia as they try to find a balance between being new parents to prophesied twins, dealing with friends, the appearance of an old enemy, the war ahead and an unnatural distance that has formed between the two lovers.

This was a good series with a slightly different spin on the Vampire origins (although it has been done before) with Cain being the original vampire.
Sophie is his daughter to a human – the elusive Half Blood Princess.
She is on the run from her brother and ends up in a sleepy town where she meets Sarah who unbeknown to her is being hunted by vampires. Sophie realises who Sarah is and vows to protect her. In Blood Claim she manged to not let on to Dante and Tavian – two hot vampire brothers – who she really is, how I do not know as I would have thought with some things it would be obvious to them that she is one, though I guess that is where the whole half-blood comes into play.<

From here the pace really picks as well as the action. She gets stuck in a love triangle that she needs to work out who she really has feelings from as in Resurrection Stone when she saves someone buy giving them her blood and sees their past, which she is involved in!

Over all the 4 books I read were good and all thought slightly different from the usual vampire stories out there I did enjoy the world and history that McMinimy created. I am glad to have read in one box set rather than individually, I think it helped with the flow of the books.

The fourth part has some twists and turns and I am happy with who she ended up and I cant wait to read more of Sophie and the rest of them. 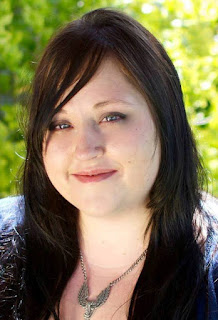 Magen started writing as a hobby. Having been one of those people obsessed with the world of the paranormal for as long as she can remember, she loves creating her own worlds for readers to get lost in. She see’s life as a constant balance of what we want and what we need. A balance  that we all have to create in our own way.
“Life is a constant balance of what we want and what that balance in her love of writing and cherishes every minute she’s fortunate enough chase her dreams. We need. It’s also a lot like a Battle. A battle that we all have to fight our own way. I chose to try and love and cherish every minute that I get to chase my crazy dreams and create a world and characters to get lost in.” 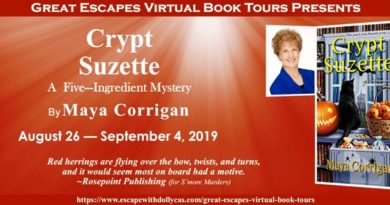