Paige Holmes hides herself in a masculine world in a desperate attempt to remain safe.

Which will she choose?

The one who appears to be the most perfect, or the one who makes her use all Seven Dirty Words?

I died for a short while the first time we met. There was no fluttering in my chest, no somersault of my stomach, no burning in my loins; my heart literally stopped. He was tall, at least six foot four, and dressed in a pair of worn indigo jeans that perfectly matched his intense stare. A silk black shirt covered what I imagined to be a ripple of hard muscle, and opened at the top showing a dusting of tight dark curls. His thick neck led towards a razor-sharp, square jaw line, a straight nose that had clearly never seen the ill-effects of rough play, and deep hooded eyes. His hair had been styled with a slight wave. I was sure it was dark brown, but it could have easily been black, and had shots of silver-grey streaking through it.

My face was lined up with his toes, or more precisely, his pristinely polished black patent Chukka boots. Palms down in the thick mud beneath me, I pushed up and sneaked a glance at the man in front of me. He looked none-too-pleased to see his clothes spattered with flecks of dirt from where I had landed and splashed him.

Paige for me is one of those characters I love and hate. A lot of the times she came across as being very childish for her 26 years. At the beginning of the story it is clear that she has suffered some kind of traumatic experience, which don’t find out until later on in the book.
She is torn between two men – the tall dark and smouldering older man, Vance Ellery who she nicknamed TDS and Matt Jackson.
Only one problem, they are father and son.
I thoroughly enjoyed this, and it was nice change to my usual read. But I certainly hope there is more to the story. and the ending certainly could make for another book.

British author, Charlotte Howard, was born in Oman and spent much of the first part of her life flitting between Oman, Scotland, and England. Now settled in Somerset, Charlotte lives with her husband, two children, and growing menagerie of pets.

Her career as a writer began at an early age, with a poem being featured in an anthology for the East Midlands. Since then Charlotte has written many short stories and poems, and finally wrote her first full-length piece of fiction in 2010.

During what little spare time she has, Charlotte enjoys reading and writing (of course), spending time with her family, and watching action movies whilst eating curry and drinking tea.
Charlotte is an active member of Yeovil Creative Writers Group.

[Tour & Review] A Change of Scenery by Debra Parmley 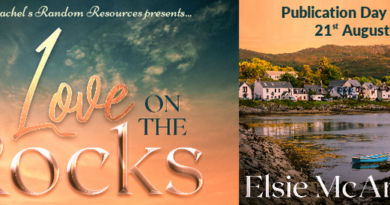 #Review Love on the Rocks by Elsie McArthur