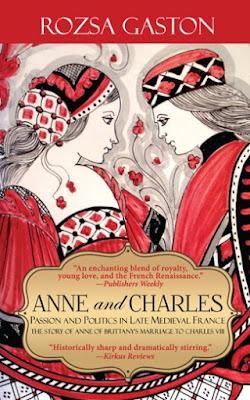 Blurb:
When Anne of Brittany’s father dies in 1488, she becomes Duchess of Brittany, her country’s ruler at age eleven. For the next three years, the unmarried, orphaned duchess is pursued by suitors while Brittany is invaded by its larger, more powerful neighbor of France. With no other way out, at age fourteen she agrees to marry Charles VIII, King of France, to save her country. Better to be a queen than a prisoner…
Unexpectedly, a passionate relationship ensues. Yet Charles cannot shake off bad habits he has brought into their marriage, and Anne cannot help him in his darkest area of struggle.
Together, they introduce the wonders of the Italian Renaissance to France, building one of Europe’s most glorious 15th century courts at their royal residence in Amboise, in the heart of the Loire Valley.
But year after year they fail to achieve the one most important aim they must accomplish to secure the future of their kingdom. As they desperately attempt to make their shared dream come true, an unexpected twist of fate irrevocably changes the fortunes of both Anne and Charles.
Book One of the Anne of Brittany Series, the gripping tale of a larger than life queen. Next in the series is Anne and Louis, general fiction winner of the Publishers Weekly 2018 BookLife Prize.
Continue your discovery of Anne of Brittany with Sense of Touch: Love and Duty at Anne of Brittany’s Court, a captivating tale of forbidden love in the 15th century French royal court. 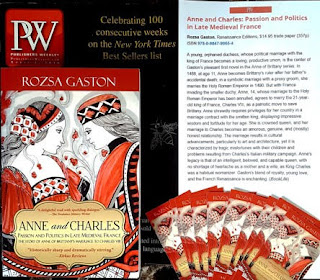 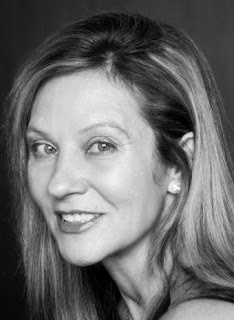 Rozsa Gaston writes playful books on serious matters, including the struggles women face to get what they want out of life. She studied European history at Yale, and received her Master’s degree in international affairs from Columbia University. In between, Gaston worked as a singer/pianist all over the world. She lives in Bronxville, NY with her family.
Gaston is currently working on Anne and Louis: Middle Years, Book Three of the Anne of Brittany Series, a fictional account of the life of Anne of Brittany, Queen of France, during the middle years of her second marriage from 1499-1514 to Louis XII, King of France. Her other books include Sense of Touch: Love and Duty at Anne of Brittany’s Court, Budapest Romance, Dog Sitters, Paris Adieu, Black is Not a Color, and Running from Love.
Author Links:
Amazon: https://amzn.to/2PLiPFQ
Facebook: https://www.facebook.com/rozsa.gaston
Twitter: https://twitter.com/rozsagaston
Web: http://www.rozsagaston.com
Goodreads: https://www.goodreads.com/author/show/5391292.Rozsa_Gaston?from
Buy Links:
Anne and Charles: https://www.amazon.com/gp/product/B0771PMYLT
Sense of Touch: https://amzn.to/2q7lU89
Anne and Louis: https://amzn.to/2PRT8ng
The Least Foolish Woman in France: https://amzn.to/2D35GDR
Anne and Louis: Rulers and Lovers: https://amzn.to/2t8o7oy 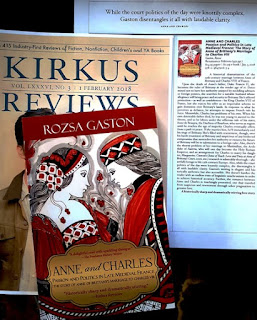 “And did my worries not trouble you when your army saw fit to invade my father’s castle in Nantes?” The duchess’ eyes narrowed but not before a flash like the glint of a steel blade escaped them, nicking Charles with its intensity.
Charles thought fast. “They did, my lady. And for that reason, every item in the castle of your birth is intact and untouched by my men.”
“And my books?”
“All five-hundred-and-fifty-three, my lady. Have you read many of them?”
“I have, Monsieur. My father raised me well.”
“I am much impressed.” Her self-confidence shot a thrill through him. What he wouldn’t give to own a smidgen of such confidence or to have a woman with such at his side, helping him rule his kingdom. “And my father didn’t raise me well, but maybe one day I will be a father who imparts learning to his children the way Duke Francis did with you.” He straightened himself to his highest height possible—not very high in anyone’s book. Fortunately, the woman he addressed was a good hand shorter, as slight as a wisp, but with every appearance of sturdiness in her demeanor.
He watched as she studied him, her mouth formed into the shape of a rosebud. The unruly thought of kissing it sprang up inside him, like an underground spring breaking through to the surface. He stifled it.
“My father was a great man.” A wistful smile played on the duchess’ lips.
In his own estimation, Duke Francis II had not been an especially great ruler. But God forbid he get in the way of the love between a daughter and her father, Charles thought, remembering his own father’s love for his eldest daughter. Louis XI had made him feel like a simpleton, only fit to be led around by his much smarter oldest sister.
Charles’ blood boiled. The moment had come to change what others thought of him, beginning with his family members.
“Will you come with me, Princesse la Duchesse?” He held out his hand, praying she would take it. He could see she pined for her father. He would try to substitute— although his feelings, when he drank in her sweet face and figure, were anything but fatherly.
Anne of Brittany lifted her chin and hesitated. Charles sensed the room freeze, the duchess’ attendants intent upon their sovereign’s next move.
“Where do you lead me?” Her hand remained at her side.
He had no idea, but it looked as if she was used to having her way, so he tossed the ball into her court. “To the direction you tell me your favorite garden is in.”
“A good plan.” Her smile this time was wider, but not too wide—just wide enough to swallow the reason of the young king of France in its expanse. Stepping forward, she took his hand. 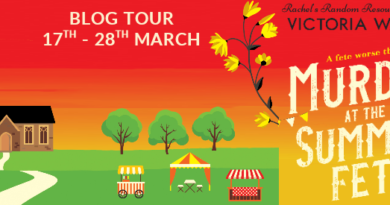 #review Murder at the Summer Fete by Victoria Walters