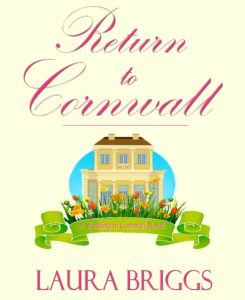 Return to Cornwall
by Laura Briggs

The sequel novel to the best-selling UK series A WEDDING IN CORNWALL brings new surprises, romance, humor, and wedding bells, to readers who fell in love with the first stories.

Busy mother of two Julianne Rose has extended her talents beyond the manor house, opening her own event planning agency with the help of no-nonsense best friend Kitty. Balancing the chaos of daily life with their respective careers in their beloved Cornish village means Julianne can rarely snatch a romantic moment with handsome husband Matt. And just when it seems things couldn’t get any more chaotic, a sudden arrival at Cliffs House lands Julianne in the most unusual event of her career.

The reappearance of Percy or ‘the old earl’ after years of adventures abroad has temporarily shocked Lord William and Lady Amanda and set the entire village abuzz with gossip. Grizzled, spry, and delightfully eccentric, he’s returned with a most unusual set of traveling companions: an archaeological team digging in a spot whispered to have ties with the legendary Camelot. But it’s Percy’s ties with a certain charming woman among its team that has everyone taken by surprise, along with the news of their soon-to-be nuptials.

Tasked with planning the big day, Julianne and Kitty spring at this opportunity despite its rushed timeline and their own woes regarding the renovation of their future event space. But as the big day rolls closer for the earl and his bride-to-be – with cakes and wedding flowers competing with pottery shards and an ancient warrior chieftain’s grave for attention — are there still surprising revelations to come?

Adding to the excitement is the return of former Cliffs House maid Gemma, whose posh new life as a novelist may not be all it seems … and Dinah visits in a flurry of festive baking for a holiday competition on everyone’s favorite baking show. Kitty’s life is in a tizz regarding both family and secrets … and Julianne’s happy marriage is challenged by an unwelcome sexy-and-persistent suitor among the summer visitors.

Filled with old friends, new adventures, and heartwarming Cornish charm, RETURN TO CORNWALL is an all-new, full-length novel—the first one ever to feature the characters from the original series!

Thank you so much to Fee for this chance to share an extract of my romance release Return to Cornwall with all the readers at eBook addicts!
This feel-good summer read features the same characters and setting from my long-running series ‘A Wedding in Cornwall’.
In the scene below, event planner Julianne is sharing some news with her husband Matt about a surprise visitor in the Cornish village.
Their old friend Dinah, a baker preparing for a contest, is also there for the unexpected announcement.

“You know about him, right?” I sipped my cup of tea. Pushing aside the stack of half-folded brochures, I made room for Matt to set the teapot and sugar bowl on the table.

“I did, but I had no idea he was still alive. William hasn’t mentioned him in years.” Matt poured himself a cup. “I suppose I thought he had died while overseas. Obviously, I was wrong.”

“This would be the gent of ‘whisky pudding’ fame?” said Dinah, dipping her icing knife into the bowl. “The village still circulates hairy stories of his day — rolling back the downstairs carpets for village troyls that lasted until the wee hours, racing horse carts against some travelers’ rigs on Saint Swithin’s Day festival.”

“After his wife died, he probably didn’t have much else, with his son grown,” I remarked.

“She was still alive for those antics,” answered Dinah. “It grows wilder after she was gone, taking the last of sanity and decorum with her.”

“It improved after the son married. More respectable and genteel parties, fewer questionable stunts by the old gentleman. But the accident in the last pony race had taken his equine zeal down a notch.”

Her latest iced biscuit found a place on the trays of a dozen or so already finished — red velvet pecan shortbread with a cinnamon-spiced mascarpone  frosting.  I stole another one and popped it in my mouth, giving Dinah a thumbs up at the same time.

“I think the frosting is too much,” she said, frowning. “It’s too thick — I think a nice white chocolate glaze would be better.”

“You’re telling me this could be better?” I glanced at Matt, who shook his head.

“But keep the cinnamon,” I said. “Just a pinch. It’s for the holidays, after all.”

I couldn’t tell if Dinah’s tsking noise was approval or pity for a suggestion in bad taste. Whatever she noted on her messy recipe card was Greek to me, since it was scribbled in all its margins.

“William asked us to dinner, to be the icebreaker for them since they haven’t seen Percy in a decade or so,” I said to Matt. “He makes it sound like a favor, but I didn’t say yes. I thought I would ask you first.”

“If I want to be the buffer until Will and his grandfather are beyond polite chitchat?”

“If you’re as curious as I am to see what he’s like,” I said, wiggling my eyebrows.

Matt arched one of his own. “Should I be?”

“Probably  not. I’m just intrigued because it’s something new. How often do things change in this village?” I heard a snort from Dinah. “Besides, Amanda will be way too tired to entertain anybody, since she’s carrying a miniature gymnast in her womb. I make a living making small talk with strangers, so it’s no problem for me.”

“If it were me, I’d go,” remarked Dinah. “If only to be ahead of the gossip when Dovie Tunbridge finds out the prodigal squire is back. But it’s only me, other people would say that it’s ten times more entertaining to wait for the rumor mill to spin its web.”

“You’re probably welcome to come, if I call Lady A and tell her you’re in town,” I said.

“Me? When would I have time to sit down and eat with spice cake pinwheel sticky buns to create?” challenged Dinah.

“That sounds amazing,” I said, with a little groan. “Forget Michael’s shepherd’s pie. I’m staying here, no matter how long it takes for you to bring those out of the oven.” 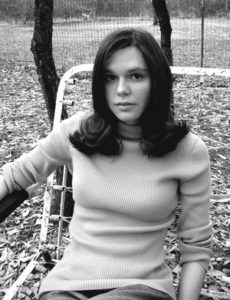 Laura Briggs is the author of several feel-good romance reads, including the Top 100 Amazon UK seller ‘A Wedding in Cornwall’. She has a fondness for vintage style dresses (especially ones with polka dots), and reads everything from Jane Austen to modern day mysteries. When she’s not writing, she enjoys spending time with family and friends, caring for her pets, gardening, and seeing the occasional movie or play.

*Terms and Conditions –
Worldwide entries welcome.  Please enter using the Rafflecopter box below.  The winner will be selected at random via Rafflecopter from all valid entries and will be notified by Twitter and/or email. If no response is received within 7 days then Rachel’s Random Resources reserves the right to select an alternative winner. Open to all entrants aged 18 or over.  Any personal data given as part of the competition entry is used for this purpose only and will not be shared with third parties, with the exception of the winners’ information. This will passed to the giveaway organiser and used only for fulfilment of the prize, after which time Rachel’s Random Resources will delete the data.  I am not responsible for despatch or delivery of the prize. 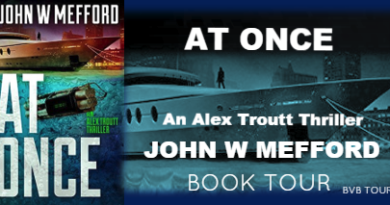