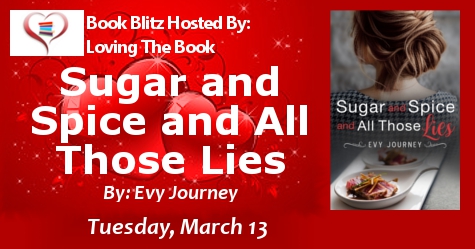 General
March 13, 2018September 5, 2020 Fee
#blitz Sugar and Spice and All Those Lies by @eholychair @lovingthebook 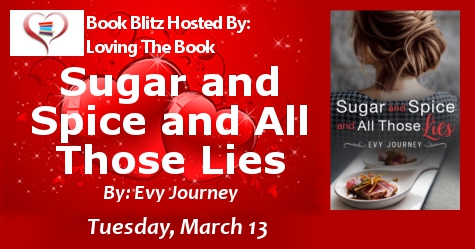 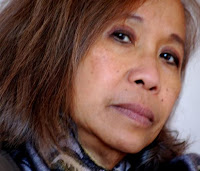 Evy Journey, writer, wannabe artist, and flâneuse (feminine of flâneur), wishes she lives in Paris where people have perfected the art of aimless roaming. Armed with a Ph.D., she used to research and help develop mental health programs.
She’s a writer because beautiful prose seduces her and existential angst continues to plague her despite such preoccupations having gone out of fashion. She takes occasional refuge by invoking the spirit of Jane Austen to spin tales of love, loss, and finding one’s way—stories into which she weaves mystery or intrigue.
Connect with the Author here:
~ Facebook ~ Website ~
~ Twitter ~ Facebook Group ~ 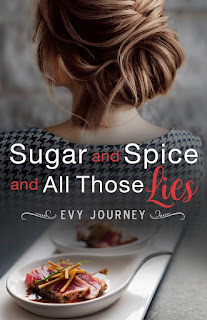 Gina’s grandfather was a French chef whose life was cut short by a robber’s bullet. The only lasting legacy he could leave his family was his passion and talent for cooking.
Growing up poor but with a mother who is a gifted cook. Gina learns cooking a great meal is an act of love. An art that sustains and enhances life.
A world of new challenges, new friends, and new loves opens up for her when she’s chosen to cook for a Michelin-starred restaurant.
But danger lurks where one never expects it.
Can her passion for cooking help Gina survive and thrive in this world of privilege, pleasure and menace?

I’m alive. I’m dead. I’m in-between. In that limbo where my vital signs hover just above death. I rise above my body and look down on it, lying on a gurney. Hospital staff are rushing me along the brightly-lit hallway to the operating room. One of them holds an oxygen mask on my face. Another, a bag of intravenous fluid connected to my veins by a tube.
I’m not ready to die yet. These good people anxious to rescue me don’t know that my resolve is the only thing that is keeping me alive. No, I’m not ready to die—I’ve only just begun to live. I have yet to prove to myself, to the world, that I have what it takes to prevail.
My family—now on their way to the hospital—doesn’t know yet exactly what happened to me. And except for one detective, neither do the police. I see him now by the foot of the gurney, keeping pace with the nurses. He’s scowling, his lips pressed into a grim line.
A tall, taut, and solitary man, he has deep-set gray eyes clouded by too many images of violent death and a lower lip that hangs perpetually open in disgust or despair. So much darkness he has already seen in his thirty odd years in this world. He needs to piece together the facts that constitute the attempt on my life, events that may have led to it, and various fragments of my past to understand what brought me to this point.
The first time I met him, I fell in love with him. There was something primal about him, some paternal, animalistic instinct to save hurt or fallen victims. Like me, maybe. It gave him power and it made him irresistible to me.
But fate is fickle. It teases. It entices. One day, something quite ordinary happens to you. Yet, you sense that that ordinary something can change your life. Not necessarily for something better, but for something new. Fate is dangling before you the promise of a world that, before then, was totally out of your reach. How can you not seize it?
Now, of course, I see the end of that promise. And it’s not where I want to be.
It’s tragic, don’t you think, that the end of that promise should be right here on a gurney, with me fighting for my life? It certainly is not what I hoped for.
How could it end this way? I embraced life, took chances, but half-dead on this gurney, I wonder: Am I paying with my life? But, like I said. I’m not ready to die yet

#BlogTour A Light in the Darkness by Lisa A. Sniderman