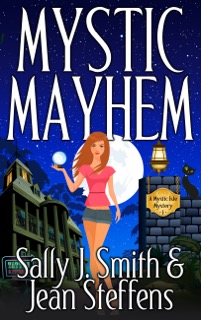 Melanie Hamilton is
not your average artist. She brings home the bacon by inking tattoos at New
Orleans’s Mansion at Mystic Isle, a resort in the middle of the bayou that
caters to fans of the peculiar and paranormal, but her true passion comes alive
when she volunteers restoring Katrina-ravaged landmarks. Between her day job,
her restoration work, and selling her paintings in Jackson Square, Mel’s life
is more hectic than Bourbon Street on Fat Tuesday. But when a guest of the
resort, a millionaire’s widow, is poisoned, and Melanie’s close friend is
arrested for the murder, things go from hectic to downright dangerous.
Mel joins forces with the resort’s delish manager, Jack Stockton, to prove her
friend’s innocence. Soon they find themselves dealing with séances, secret
passages, the ghost of the millionaire himself, gators, swamp rats, and a
sinister killer who proves that not everything is what it seems in the
Louisiana bayou.Come on along, and get your creep on.
*   *
*   *   *
The Inspiration
for our Mystic Isle Series
The Magic Castle in the hills above Hollywood
Boulevard is the headquarters and private clubhouse for the Academy of Magical
Arts, Inc., a worldwide organization devoted to the art of magic. Its
membership consists of magicians as well as those who just love magic. If you
ever have the chance to go there, DO. It’s mysterious, haunting, spellbinding,
and a little creepy.
The Magic Castle was the inspiration for
Mystic Isle Mysteries, our new series debuting September 15th from Gemma
Halliday Publishing. Our series takes place in the bayou near New Orleans,
Louisiana on Mystic Isle where The Mansion at Mystic Isle is now open and
taking guests. It’s a place similar to the Magic Castle only Mystic Isle is
dedicated to all that’s magical and paranormal. Its guests experience the
skills of magicians, mediums, fortunetellers, astrologers, and much more. Of
course, none of it is real—or is it?
Excerpt:
The Mansion at Mystic
Isle was where Cat and I worked. Located in Jefferson Parish across the
Mississippi from New Orleans at the edge of a bayou, the main building was an
old plantation house set among cypress trees and expansive green lawns. It had
been handed down through the Villars family for centuries. Not all that long
ago, Harry Villars, the down-on-his-luck, but no less genteel and stylish owner,
had the brilliant idea to turn his liability into an asset by repurposing the
place into a resort where folks dedicated to the supernatural and all kinds of
magic could come and get their creep on.
The Mansion was
decorated like the haunted house we’ve all seen at that theme park—you know the
one. Ours was similar—creepy organ music when you crossed the threshold, drafty
hallways, creaky doors, secret passages, even fake cobwebs. The whole shebang, chere. Harry Villars sank every cent he
had into it and crossed his fingers that the place would raise him to the ranks
of the solvent—then he hired all of us, a complete cast of soothsayers and
charlatans, to convince hotel guests the supernatural stuff that went on at The
Mansion was the real deal. But just between you, me, and the gators, it’s not. 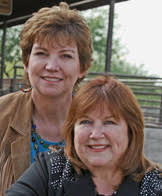 About the Authors:
Sally J. Smith and Jean Steffens, are partners in
crime—crime writing, that is. They live in the Valley of the Sun in Arizona,
awesome for eight months out of the year, an inferno the other four. They write
bloody murder, flirty romance, and wicked humor all in one package.

[Blog Tour] Women of History by Laurel A. Rockefeller