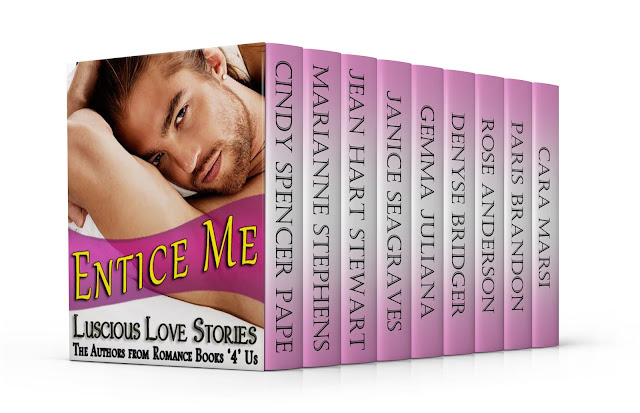 This is a great little collection of romance stories ranging from sweet to HOT.

There is also different genres in here that will definetly have something for everyone.

I loved them all and I have discovered new to me authors. Which is great as a little anthology like is great for discovering new authors.

If you like short stories that range from sweet romance to steamy hot then this is the collection for you.

Rhodri of Llyan has returned from the Crusades a cursed man.  On the way home to Wales, a young friend is sorely injured. Rhodri seeks the aid of village healer, Selene, whose gift for healing is as uncanny as her beauty.  Selene’s magic can cure wounds, but she isn’t sure she can break the curse or heal the wounds on Rhodri’s heart?

When Lady Valanna meets her new guardian, The Marquis of Tendale, she finds her attraction to him overcomes her feeling of resentment for his neglect. When she discovers that neglect was due to dreadful war injuries, the attraction deepens. A former spy for Wellington, Marcus knows his injuries from almost fatal torture will keep him forever from marriage to the girl he has long loved.

Even as Marcus fights to keep revealing his love, Valanna admits hers. Valanna is determined to break his resolve, but Marcus’ honor stands between them. How can these two ever reconcile their differences, and find happiness?

What possible twist of fate can help these despairing lovers?

About the Author:
Writing claims my heart, and one of the best decisions I ever made was when I decided to write full time. I’m pretty ordinary really. But I had the chance to travel a lot when my husband did, and fell in love with England. Since I grew up on tales of King Arthur, when my kids were older and I retired from real estate, I turned to a much-desired career of author. I’m now on my 34th book, and loving every minute I can spend at the computer. But let’s not get on the subject of computers! I just switched from a PC to a Mac and the Mac is much smarter than me!

All my heroes are strikingly handsome, of course, with a flaw or two the heroine gets to correct. Writing has always been my joy and I’m so lucky that readers actually buy my stories!

Morgan isn’t expecting romance when she accompanies her friend for a week of skiing, but when she meets Jared all bets are off.
Jared has secrets that he doesn’t mind sharing with a special lady, and he hopes Morgan is that special someone. When his past and present collide it’s worse than he imagined, and he’s forced to run for his life.

About the Author:
Janice Seagraves grew up with a deep love of science fiction and adventure stories. Always the consummate artist, she traded in her paint brush for a laptop to write breathless life-affirming novels that celebrate enduring love.

Amalie flees when she runs into danger on the cruise ship she calls home, but soon realizes she can’t afford a ticket to fly home. Xandros is more than the shipping agent everybody thinks he is, and he’s had his sights on Amalie for months. So when she suddenly becomes a stranded damsel in distress, he is quick to suggest a solution.

About the Author:
Multi-published author Gemma Juliana writes romance and mystery in many genres from contemporary to paranormal. When not at her desk, Gemma loves to cook for family and friends, collect sparkly stones, and travel the world. Her muse demands large doses of coffee and chocolate.

What’s Love Got To Do With It by Tina Turner

An unexpected trip to Ireland takes Caragh McCarthy back to her ancestral home, and the past collides with the present when car trouble strands her on the moors of Country Tyrone. When Kelan O’Shea comes to her rescue, a 300 year old injustice might yet be set right, and a promised future can be fulfilled.

About the Author:
As an award-winning, best-selling author, Denysé Bridger writes about a multitude of things, always with a touch of romance, passion, and fantasy. Her heroes tend to be alpha men who are willing to do whatever it takes to win the heroine’s heart and trust, while her heroines are strong, emotionally courageous women who put their hearts on the line for the men they love. Passionate, honourable characters drive Denysé’s stories, in whatever genre you find them in.

The story opens with the notorious witch hunts in 17th Century Salem, Massachusetts.

As formal education for women lacks substance in 1904, Neila Flannigan leaves Ireland to attend Radcliffe women’s college in America. Shy and introverted, Neila passes her lonesome hours making sketches of the Harvard grounds and sending them home to her father. A chance encounter with a kindly old Irish woman inspires her to sketch a statue in an old, unused building. Desperately lonely, Neila ends up sharing her thoughts and feelings with a man carved in stone. Some days it feels like he listens.

About the Author:
Known for crafting characters that stay with you long after the last page has turned, Rose Anderson is a multi-published award-winning author and dilettante who loves great conversation and delights in interesting things to weave into stories. Rose also writes across genres under the pen name Madeline Archer. No matter which pen name she uses, Rose chooses descriptive words as carefully as an artist might choose a color.

As a self-described “persnickety leisure reader”, Rose especially enjoys novels that feel like they were written just for her. “It’s hard to explain, but if you have ever read a book that felt like you alone knew what the author was getting at, then you’ll know what I mean. I tend to sneak symbolism and metaphor into my writing. You might say it’s a game I play with myself when I write. I just love when readers email to say they’ve found something.” These hidden insights are her gift to her readers. Rose hopes readers will feel her stories were written just for them, for that’s the truth.

She lives with her family and small menagerie amid oak groves and prairie in the rolling glacial hills of the upper Midwest.

I’ll BE SEEING YOU by Paris Brandon
Genre: Period Romance

Jack Howland, part of an elite group of special OSS agents can’t resist the pull of the moon or widowed USO hostess, Lulu Lane. Their paths cross again after the war but will the truth about what he is send her screaming into the night or back into his arms?

About the Author:
A lover of action-adventure movies and vintage clothing, Paris can be found most days bent over her keyboard, creating worlds where a wolf shifter saving the woman he loves from a Nazi war criminal, is all in a day’s work.

A San Francisco sous chef discovers she might have bitten off more than she can chew when a yummy Italian man stirs up a recipe for romance on the delicious Isle of Capri.

Sous chef Cat Connors has spent a lifetime feeling like a stale cracker on a plate of fancy hors d’oeuvres among her stepfamily. But when she travels from San Francisco to the sunny Isle of Capri, she’s determined to finally shed her dowdy image and spice up her life. She has big plans for her future as a chef. Those plans don’t include a yummy Italian with a mouth-watering body and a smile that melts her insides like gelato under the hot Capri sun.

When Alex Viteli retreats to his villa on Capri to escape the notoriety and legal troubles brought on by his family, the last thing he needs is a beautiful, tempting dish of a woman. Alex may be the scion of a wealthy Italian family, but that won’t matter if he can’t cook up a scheme to clear his father’s name and keep himself out of prison.

Though they fit together like strawberries and chocolate, Cat and Alex may not have time for more than a quick bite of romance. Cat’s future is in San Francisco. Alex can’t leave Italy. But the sultry Capri nights might tempt them both to savor just one more sweet taste of love.

About the Author:
An award-winning and eclectic author, Cara Marsi is published in romantic suspense, paranormal romance, and contemporary romance. She loves a good love story, and believes that everyone deserves a second chance at love. Sexy, sweet, thrilling, or magical, Cara’s stories are first and foremost about the love. Treat yourself today, with a taste of romance.
When not traveling or dreaming of traveling, Cara and her husband live on the East Coast in a house ruled by two spoiled cats who compete for attention.

Author’s Note: Thank you for reading my story. I hope you enjoyed this romantic trip to the Isle of Capri. I’ve visited Capri twice, and it is indeed bewitching. 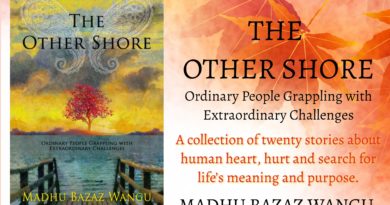 #Review The Other Shore by Madhu Bazaz Wangu