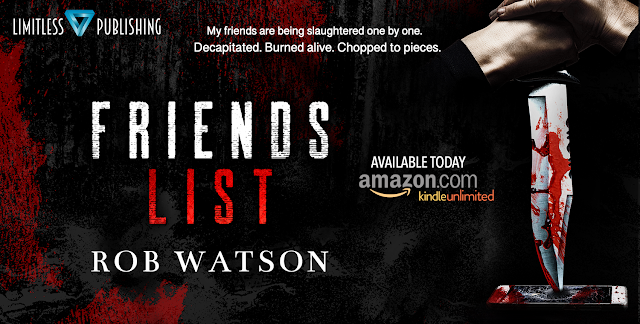 Amazon Review – “Very suspenseful. The novel gives clues throughout, but never gives it away. The climax will have you cringing and on the edge of your seat. Best read I’ve had since my days of reading Stephen King.”

Amazon Review – “Rob Watson writes a very twisted psychological suspense that will leave you on the edge of your seat and trying to figure out the inner workers of a killer’s mind.” 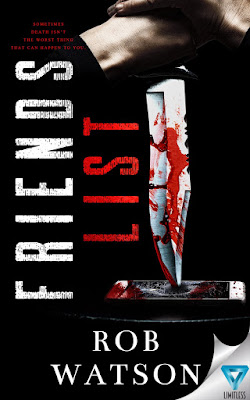 My friends are being slaughtered one by one. Decapitated. Burned alive. Chopped to pieces.The hooded killer has vowed to keep murdering people I care about until they’re all dead, their profile pics on social media replaced with photos of their mutilated bodies. The police can’t catch him. They have no leads.

The horror is making the visions come back—the fire that took my parents, leaving my twin Alex and me alive, but broken.

The hooded killer won’t stop until I’m completely shattered. He’ll eat away at my mind, heart, and soul until there’s nothing left. No one left to love, no one left to trust, and nothing I can be sure is real.

Dr. Cross thinks a trip back to the place my parents died will stop the visions. Alex is afraid it’s a trap.

But I know the hooded killer won’t hurt me. That’s not his game.

His game is much deeper. Much darker.

The music’s volume lowered and knocking echoed through the speakers. The words “Someone’s Knocking” appeared next to the door graphic. Kimberly closed her blog window and moved her avatar to the peephole.
Another dialogue box appeared, inside which Kimberly typed: Who’s there?
The peephole widened and an avatar of a hooded figure appeared. A dialogue box popped up next to the avatar, and inside the box appeared the screen name IWNTUDED.
Kimberly typed: Do I know you?
IWNTUDED responded: Yes. But not the way u think u do.
“Seriously, this is so not the time for this,” Kimberly muttered to herself. She typed: Doug, is that you? Look, I know you still love me, but it’s over. It’s nothing you did, it’s just that I’m going through so many changes right now. She sighed. I’m sorry. Tell you what.  I’ll give you a weekend of goodbye sex when I get back, okay?
After a few uncomfortable moments passed, IWNTUDED responded: Sounds like fun, but I’m not Doug.
“What the hell?” Kimberly whispered as the ambient light from the laptop’s screen eerily illuminated her pretty face. She stared at the screen and typed: Who is this?
There was a long moment before IWNTUDED responded: The last person you’ll ever see.
“Okay, fuck this,” Kimberly blurted. She clicked the “KEEP OUT” icon next to Iwntuded’s screen name, and the “LOCK DOOR” icon on the keyhole graphic.
“So long, creep.” She picked up the Starbucks cup sitting on her Abnormal Psychology textbook, took a sip, spun her chair around, and reclined with her back to the computer.
While she sat there thinking how much easier life would be if it was this simple to get rid of people in the real world, the word “Unlock” appeared on the door graphic, and the Iwntuded avatar entered the room and approached the Kimber avatar.
Finished musing over the inherent advantages of Cybering, Kimberly turned back toward the laptop screen and was dumbstruck when she saw Iwntuded’s avatar standing next to hers.
“What the hell?” She placed her Starbucks cup on the desk and then typed: How did you get in here?
The Iwntuded avatar held up a key graphic, and then IWNTUDED typed: I have a key.
Kimberly’s heart skipped a beat. She sank down in her chair and wrapped her arms tightly around herself.
Should I be scared of this creep? She shook her head. Of course not, this is just some acne covered kid with nothing better to do on Datenight USA, or some overweight, balding pervert who gets off on scaring the shit out of young girls.
He fear morphed to anger and she sat up straight in her chair. Look, jerkoff, she typed, the Roommates website recorded your IP address when you logged on. So get out of here and leave me the fuck alone before I report your perverted ass.
IWNTUDED replied: Okay. But first, will u do me a favor?
Kimberly typed: What?
May I have a sip of that coffee?
What the fuck?
Kimberly typed: What coffee?
After a few tension-filled moments, IWNTUDED replied: The Starbucks next to your keyboard.
The words on her laptop screen leapt out at Kimberly as if they were in 3D. She glanced at the Starbucks cup, after which she jumped to her feet and scanned nervously about her dimly lit apartment.
Oh my God – someone’s here! But how did he get in? And where is he now – watching me?
Just as she reached for the phone to dial 911, Kimberly spotted the webcam atop her computer’s monitor and a wave of relief washed over her. “You little hacker.”
She sat back down and yanked the USB cable from the webcam. “Show’s over, jerk wad.” She smirked at her laptop screen and held her middle finger up to Iwntuded’s avatar.
That wasn’t very nice.
Kimberly replied: What – ending your little peep show?
IWNTUDED typed: No, giving me the finger.
Kimberly jumped to her feet. She glanced wildly around the room and then back at the monitor. Fight or flight mode started setting in as she typed: Who are u and what the fuck do u want?
I told u – I’m the last person you’ll ever see. As for what I want…
On the opposite side of the unlit apartment, a closet door quietly opened. A hooded figure emerged holding a smartphone in one hand and a sixteen-inch hunting knife in the other. While Kimberly sat staring at her computer screen, the figure typed on the smartphone’s keypad, and the reply displayed on Kimberly’s laptop screen: It’s all in my name. What’s my name, Kimberly?
Wide-eyed, her hands trembling, Kimberly typed: IWNTUDED.
IWNTUDED instantly replied: That’s what I want!
Kimberly studied her tormentor’s username with the urgency her situation demanded. Then, in a dread-filled whisper, she read aloud, “I…want…you…dead.” 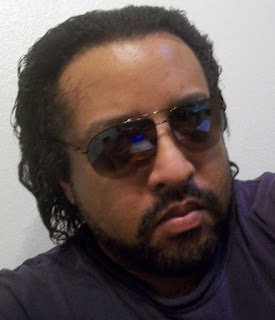 Rob Watson was born in Santa Monica, California. He is married and is the father of three children. He is the president/CEO of Damaged Psyche Productions. He is a horror/sci-fi fanatic and has been ever since early childhood. He has been imagining and writing stories for as far back as he can remember. Some of his idols are Rod Serling, Steven King, David Cronenberg, Edgar Allan Poe, Alfred Hitchcock, Wes Craven, and Dan Curtis. Rob studied film and creative writing at Long Beach City College and California State University, Long Beach, after which he spent a couple of years working on movie production crews (as set PA, second assistant director, boom, etc.). Since then, he has written almost a dozen feature length screenplays (mostly horror and/or sci-fi) as well as numerous short stories and scripts. He has two original screenplays currently in pre-production and has written several “work-for- hire” scripts. 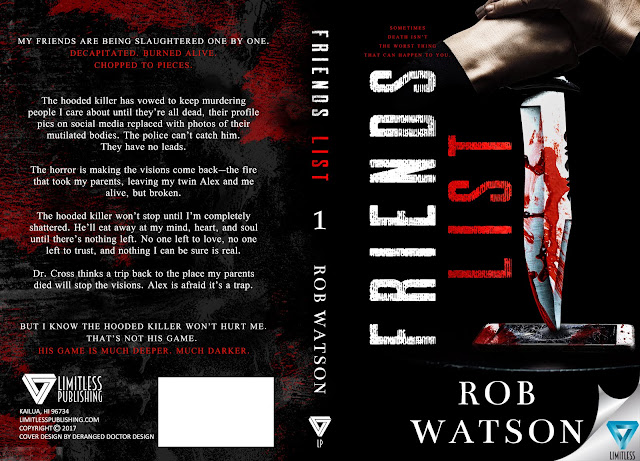 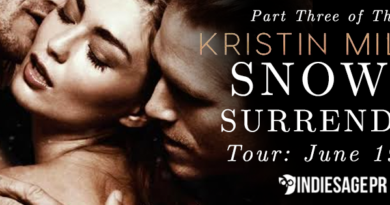