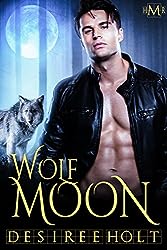 Wolf Moon is book one in the new Hot Moon Rising series and boy is it hot!!

Alexa is a wolf shifter who fell in love with a human which is frowned upon within her pack, and when he learned her secret he left her and her pack tried to make her marry a cruel wolf to which she managed to escape.

She has set up a new life for herself but find herself falling in love with another human – her neighbour Jesse, who is a cop. Her inner wolf is treating Jesse like her mate, yet she is scared that once he finds out she really is he will leave her or worse.

This is one steamy book and the sex is off the charts between them and for such a short book there is so much packed into it. You will need to read it for yourself to see what happens with Jesse and Alexa 😉

Shape shifter Alexa Morgan fled her home in the north when her relationship with a human ended in disaster and the clan alpha shunned her. Now living in Florida, against all her better judgment she finds herself in a hot relationship with Jesse Farrell, the cop next door.

Despite her knowledge that the relationship is doomed, she cannot stay away from him. When Jesse, a gang task force member, is hurt one night on the job, Alexa begins to spend her nights tracking him, keeping him in her line of sight, determined to protect him. But she’s terrified of his reaction when he discovers her true nature. Will he accept her or bolt as her other lover did, leaving her destroyed?